A Big Old Box of Yankees From Dad!

Hey guys, Drew back here. So I've been meaning to post this for a little while now, and feel bad for not having done so sooner. Anyways, recently, Dad contacted someone on Craigslist, who was selling a huge load of Yankees cards. One day he came home with an enormous box full of Yankees, which brightened my day since I was feeling very sick at the time. Check them out! 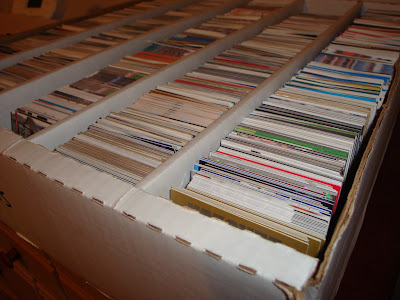 Yeah, there were a whole lot of pinstripes inside this box, 5 rows to be exact. There were a lot of duplicates but that won't be a problem as I have many big Yankee fans to give them to. Now let's get into the stuff I thought mattered most... 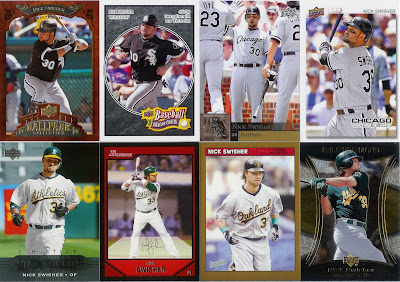 Here are 8 new Nick Swisher cards I got through this. In total, I added 18 new Swisher's to my collection, giving me about 156 unique cards of his. I was surprised I didn't have a few of these, but I'm glad I was finally able to get them out of the way. 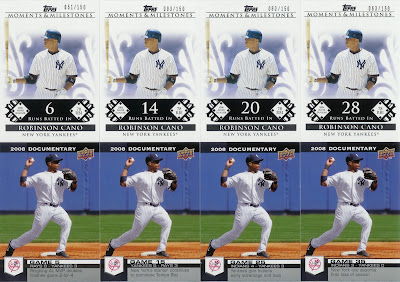 On to my 2nd personal collection; I was able to add 22 Robinson Cano cards to my respective Cano collection. It's been difficult for me to collect Cano's cards of late because his stock has finally soared as it should have a long time ago and everything of his is in demand. But I'm glad I was able to knock off a whole lot of 2008 UD Documentary and 2008 Topps Moments & Milestones cards of his. And yes, every card in the scan above is a different card, they're not doubles. Yeah, I'm confused too. 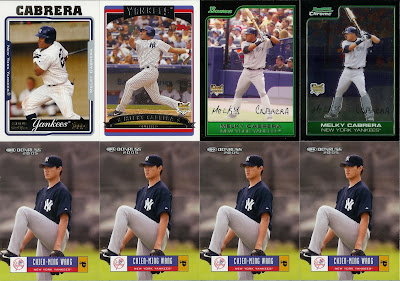 Here I found a lot of decent rookie cards, or at least, rookie cards that were decently valuable at one point or another. The top row of the scan consists of many different Melky Cabrera rookie cards, who is having a great year over in Kansas City, when many people didn't think he could do it again. He's currently sporting a .303 batting average, with 18 home runs and 83 RBI! The bottom consists of many Donruss Chien-Ming Wang rookie cards. Wang is trying to make a comeback with the Nationals this year after several injury filled seasons, but hasn't reached the point of success he had for the Yankees in 2006 and 2007. 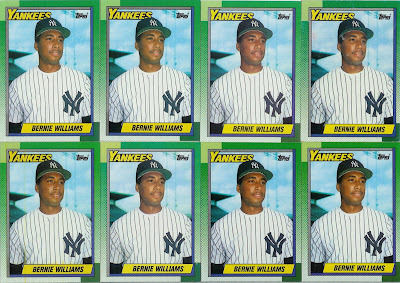 I used to think I had a lot of 1990 Topps Bernie Williams rookie cards. I now feel like I have enough to give one to every person in the entire world. It's definitely a nice card though. 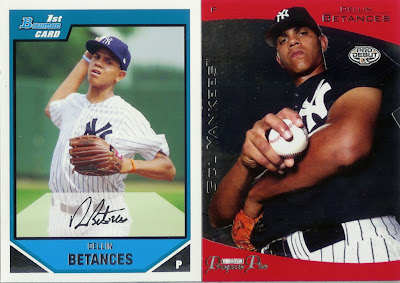 In this box I was able to add 2 more Dellin Betances rookie cards to my collection! I can't get enough of this guy's rookie cards, as the Lost Collector recently informed me of his MLB debut quickly approaching, as he was called up to the Yankees on  September 9th. He hasn't had an opportunity to pitch yet, but I'm sure he will during his little cup of tea. 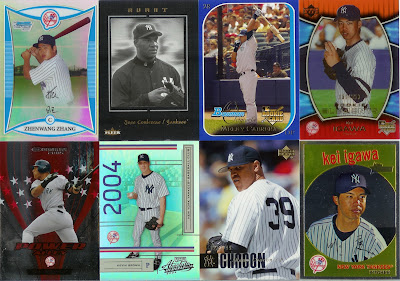 Next were a few of the MANY numbered inserts and parallels we came across while searching through the box. Nothing overly valuable, but I always liked numbered cards and I'm glad to add these to the collection. 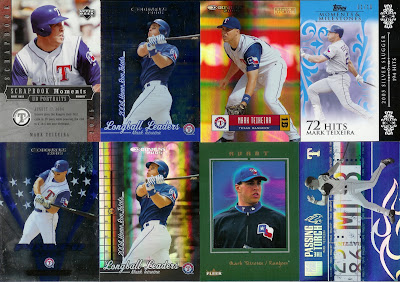 Also, there were plenty of Mark Teixeira insert and parallels, all numbered! I don't have much of anything of Tex, who is putting up another very good season. He seems almost underrated on this Yankees team, because not many people talk about him, but I honestly feel like he deserves to be in MVP talks every year. Despite a typical slow start, he is probably one of the best (if not THE best) 1st basemen in baseball defensively, but also has a great power stroke and has a solid 37 home runs. The batting average this year though? Meh. 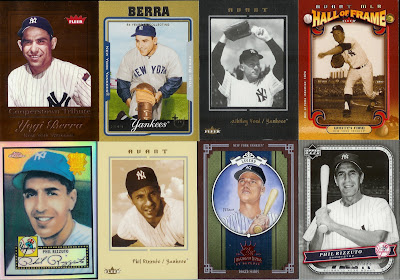 One of my favorite parts of the box were all these nice parallels and inserts of former Yankee greats such as Yogi Berra, Phil Rizzuto, Whitey Ford, and Roger Maris. I have to admit the card companies did a great job honoring these players, as these cards are just absolutely beautiful looking. The Rizzuto Topps Archives Chrome Refractor is amazing looking in person and I love the Maris Diamond King card. 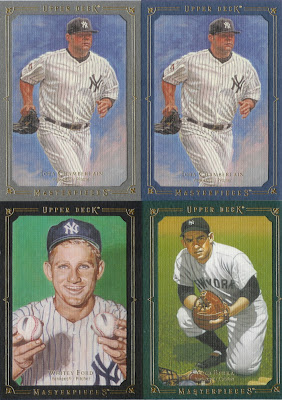 Now on to one of my favorite sets of all time; nothing better than some 2008 UD Masterpieces. I found some awesome framed cards mixed in, including a Yogi Berra green /75, a Whitey Ford not numbered black border, and two Joba Chamberlain parallels, one numbered to 50 and the other /25! These are seriously as beautiful as it gets in the card hobby, and may very well be my favorite modern set out there. 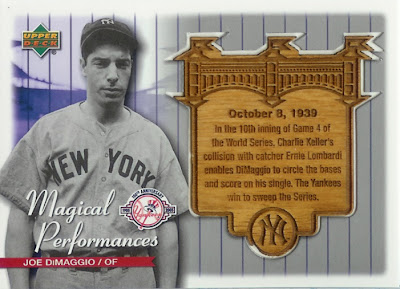 An engraved piece of Joe DiMaggio's bat? Holy WOW! Yeah, I know, it's not actually a real bat relic of Joltin Joe's, but it sure does look sweet. The card dedicates a magical DiMaggio performance when a play at the plate initiated by Charlie Keller allowed him to circle the bases and score, eventually leading the Yankees to sweet the 1939 World Series. I don't have much of DiMaggio so its a cool add for sure. 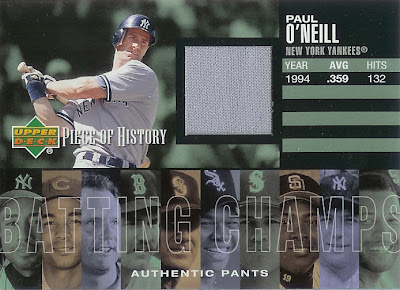 While this card isn't of Joe DiMaggio, it is at least a real game used jersey card, of former Yankee great Paul O'Neill! The card celebrates his 1994 season when he batted .359, something close to unheard of today, or at least a modern day rarity. I've always had a lot of respect for O'Neill, he truly was a warrior on the field but a gentle giant off of it. I would love to meet him sometime for sure. 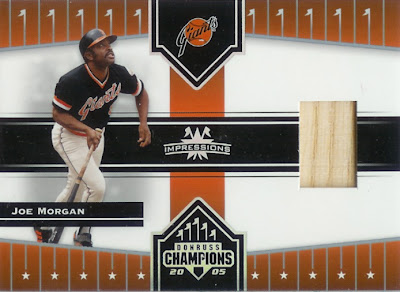 We move on to the next relic, which oddly enough is the only non Yankees card in the entire box! However, it does feed another hobby addiction of mine, which is cards of Hall of Famers! Out of 2005 Donruss Champions, here's a nice Joe Morgan bat card! You don't see much of Morgan as a Giant but its pretty cool nonetheless. 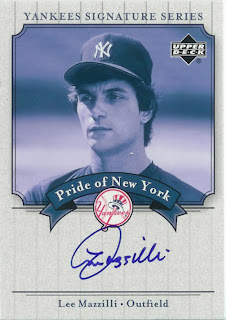 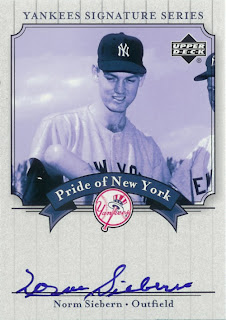 Finally, we get to the 3 autographs in the lot. The first 2 were out of the 2003 Upper Deck Yankee Signature Series product, on card autos of Lee Mazzilli and Norm Siebern. I very well may consider building this set one day, as I do have 4 different autographs out of it now, in Sieburn, Mazzilli, Winfield, and Cone! I had to research Sieburn because I literally knew nothing about him, but he was a 3 time All Star who played outfield for the Yankees from 1956-1959. 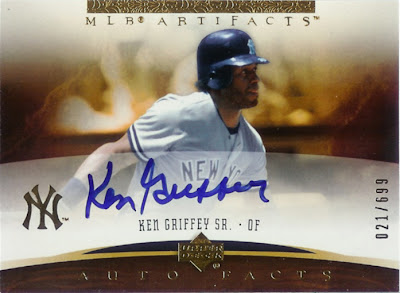 The final card was one I've wanted to get myself for a while. Out of 2006 UD Artifacts, and numbered out of 699, is an on card autograph of Ken Griffey Sr.! Yeah, Junior would've been a little better, but his daddy wasn't too bad either. A lifetime .296 hitter; Griffey spent 5 seasons with the Yankees, on a few rough teams in the mid 80's. He's got a really nice strong signature, and it fits the card design amazingly!
Anyways, that'll just about do it! Thank you so much as always dad, I'm speechless by the insane amount of things you do for me and I appreciate it so much!
See Ya!
Posted by Drew at 8:46 PM