Hey guys, Drew back here, and I have a new favorite product. Mike & I split a box of 2008 Upper Deck Baseball Heroes. For the 2nd Quarter Spectacular, I opened a box of this and had some good luck. Also, I pulled a sick card at Dragon's Den, one of my local stores in one pack! So, I already loved this product, but now I love it more! Here is the all new 2008 UD Baseball Heroes Box Break Review! 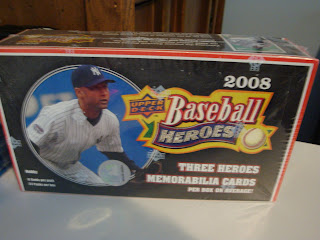 So, we got a really good box! I love my Gibson Dual with Jake Peavy, but Mike got a sick hit to add to his collection! Anytime you pull a Steve Carlton autograph you have some good luck. As for our other hits, my Kevin Kouzmanoff Relic was horrible, and now I have 2 autographs, and 1 relic of him! Mike also got a Harden GU, which isn't great but not too bad. So, I will grade it soon, but for now I will finish with this...
Posted by Drew at 4:20 PM