Hey everyone, Drew back here! How about that World Series? First of all, I never would have expected the Mets to come anywhere close to the Fall Classic, but boy they sure did make a run for it. The Royals were the better team, and deserved the title in the end, but the Mets showed plenty of promise for the future (as long as they can keep their offense from falling to shambles this winter). The parade in Kansas City was unbelievable yesterday, with more people in attendance than the entire population of the city! Good for them.

This morning, it was announced that the Mets' Matt Harvey and Rangers' Prince Fielder took home the NL and AL Comeback Player of the Year Awards, respectively. This was the first major 2015 award handed out based on this year's performance, and I think the voters got it right. Many wondered if Alex Rodriguez would have a chance at surpassing Prince Fielder after not playing at all in 2014 due to a suspension, besides myself. There was no way he was going to be handed an award after making a mockery of the MLB for as long as he had, no matter how well he did in 2015 on and off the field (he was fantastic on Fox Sports).

I'm interested to see how the voting for the NL Cy Young Award goes down over anything else though. I personally rode Zack Greinke all year long into my second consecutive fantasy baseball trophy, so I would have to side with him, although Jake Arrieta presents a spectacular case as well with perhaps the greatest second half ever pitched in baseball history.

Anyway, I have one offseason TTM to show off for you today, and it came by way of the up and coming Houston Astros. 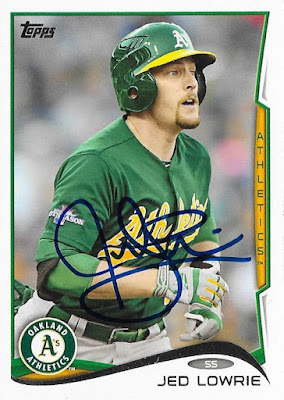 Jed Lowrie feels like he's been around for a long time. He debuted in 2008 with the Red Sox before going to Houston, then to Oakland, and most recently back with Houston once more. He's always been a consistently average middle infielder similar to players like Stephen Drew, who are capable of picking up a bat and helping a team win in many different ways. His best career season was in 2013 with Oakland, when he batted .290 and hit 15 home runs. Injuries have gotten the better of him on several occasions, including 2015 when he only managed to play in 69 games. With Carlos Correa the shortstop now for the foreseeable future, Lowrie will either have to move to another position or to another team to receive playing time.

I vaguely remember sending this 2014 Topps card out, so it must have been a Spring Training TTM request. He signed one card for me and included two small business cards for his photography website in exchange for my blog business card! Check out his site, he's actually taken some really beautiful pictures.