Hey guys, Drew back here! To keep things fresh from my recent Luis Severino splurge, I decided to add a few autographs of the Yankees shortstop of the future, Didi Gregorius.

I wasn't exactly blown away when they initally dealt for the struggling young middle infielder, but I was willing to give him the chance to shine under the bright lights. It took a while for him to get going, after all, he was filling Derek Jeter's shoes. Once he got it all together, he emerged as a Gold Glove front runner with the capability of collecting some clutch hits towards the bottom of the lineup.

Many feel that Didi deserved the AL Gold Glove over the Royals' Alcides Escobar, but just the fact that he was considered makes Cashman look brilliant for the deal. Shane Greene was the only player the Yankees served up for his services, who, after a terrific start; finished with an ERA almost eclipsing 7.00 for the Tigers. 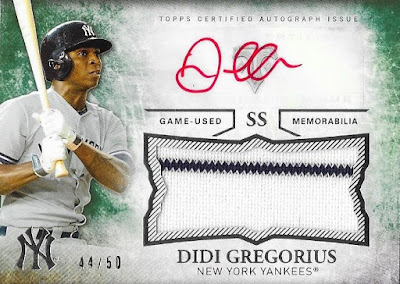 Now that the Yankees seem to feel comfortable with him in the fold for years to come, I felt like I needed to give him a little more hobby love. His autographs are affordable for now, and the only one I had prior to these was a TTM I got when he was with the Diamondbacks.

The first card I bought was out of 2015 Topps Triple Threads, and is the green parallel autographed relic numbered to 50. The choice to use red ink is a little strange, and makes the card almost feel Christmas themed. However, with a gorgeous thick blue pinstripe across the relic and the low serial numbering, this was a card worth investing in. I remember when Robinson Cano was starting to come into his own and I bought a similar Triple Threads style card of his for about $20. Before Robby left for Seattle, that card was worth much more. 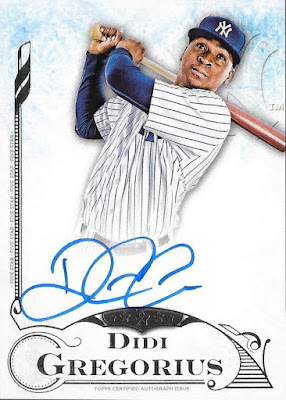 The other pickup of Didi's I made was out of 2015 Topps Five Star. I absolutely love the fresh look Five Star has delivered to collectors the past few years. It is becoming one of my most anticipated releases Topps makes. I got a steal on this on card beauty, only paying $7 shipped on eBay!

I'm excited to see what Gregorius will bring to the table in 2016. If it's anything like his second half performance this past year, I feel like we will all be extremely satisfied.