Really? An Autograph of a Surgeon?

Hey guys, Drew back here. I haven't been feeling up to par lately, so I've had some down time to sort some things out and work on the blog a bit. I'm not sure what the long term future of this site is, but for now I'm going to keep rolling out new material for you all as often as I can.

Along with my Jed Lowrie through the mail success that trickled in this week, I also got a success from a familiar face throughout professional sports today. However, this familiar place never played a minute in the NBA, a down in the NFL, and never recorded an at bat in the MLB. Instead, he's the man responsible for patching up injured players from all three sports and beyond. 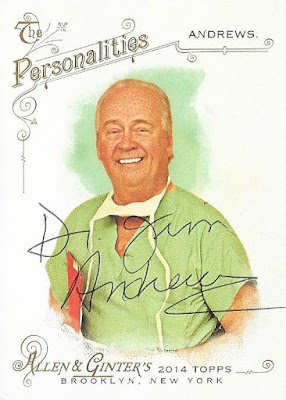 Dr. James Andrews is the name you do not want to hear in most cases when associated with a favorite player of yours. Usually when a player needs to visit Dr. Andrews, they have a serious injury that can only be fixed through an advanced surgery that can only be done by the very best. Andrews has handled numerous Tommy John, shoulder, and knee surgeries across the sports landscape, helping athletes like Michael Jordan, Bo Jackson, and Tiger Woods recover as quickly as possible.

His name was most recently in the news when Mets pitcher Matt Harvey faced a late season innings cap that Andrews was rumored to have recommended to Harvey's GM Scott Boras after he underwent season ending Tommy John Surgery in 2014. It turns out that he never recommended Harvey pitch 180 innings in 2015, but he remained at the center of a fight between a promising playoff team and a GM who wanted his client to profit in the MLB long term.

Andrews was featured in this past year's release of Allen & Ginter, so, naturally; I picked up a copy of the card and mailed it to his Orthopedic Center to get signed. Sure enough, after about a three to four month wait, I received it back signed nicely in ballpoint pen. This autograph may never be as valuable as any of his major clients, but he's served a prominent role in the games we love for many years now and I thought it would be a unique addition.