Hey everyone, Drew back here! I arrived home from school earlier this week to find a long awaited package from my great friend Andrew (Everyday Holliday). He had sent me a birthday gift in the mail during the summer that wound up getting lost in the mail unfortunately, especially since he drew me a picture of Derek Jeter along with the gift. I was disappointed by the news, but later he messaged me again saying he got me another gift to make up for it.

Sure enough, he wasn't lying, and I opened up the bubble mailer to find not one, but two autographs I needed of one of my main personal collections: 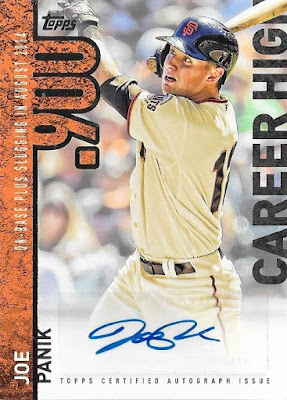 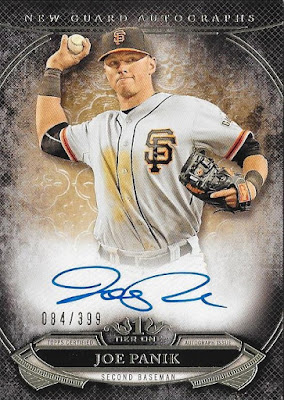 I have slowed down with my Joe Panik collection in light of my recent Luis Severino surge, but he is still one of my primary focuses at the moment. The great thing about this hobby is that you can really allot your time and effort to different collections, especially with the help of generous friends like Andrew. The card on the left is out of this year's flagship set, while the opposite card is from 2015 Topps Tier One and is serial numbered 84/399. He was in many of the Topps issues in 2015, so I have a lot of catching up to do when I do turn my focus back to the young star.

Panik had a solid 2015, although it didn't end as well as it began. He faced a lingering back injury that limited him to just 100 games with the Giants, but he performed well while healthy. I would consider the year an overwhelming success because he landed a place on the National League All Star team for the first of hopefully many times to come. Even if his career doesn't pan out from this point forward, he can still say he is a World Series Champion and former All Star. Not bad.

Thank you so much Andrew for going so far out of your way to make my birthday even more special. The cards mean a lot, but the generosity is what I really appreciated over anything else.