Leading Off- Shaking Hands with the Hit King!

Hey guys, Drew back here (and back on my regular blog)! Tonight I thought would be a nice time to begin the recap of my trip up to Cooperstown with William and his family, along with my dad! Like I said on William's blog yesterday, we all had a great time and experienced memories that we may not ever forget. And the trip started off with a bang.

After William bought a few signed balls immediately after we got in town, I decided to match him, and when I heard Pete Rose was signing at a store down the street, I knew where my first expense would take place at. Rose wasn't doing many of his classic inscriptions, however even that wasn't enough to keep me from meeting the man who I believe deserves a second chance at the Hall of Fame far more than any of the men involved in the Biogenesis/PED scandals. 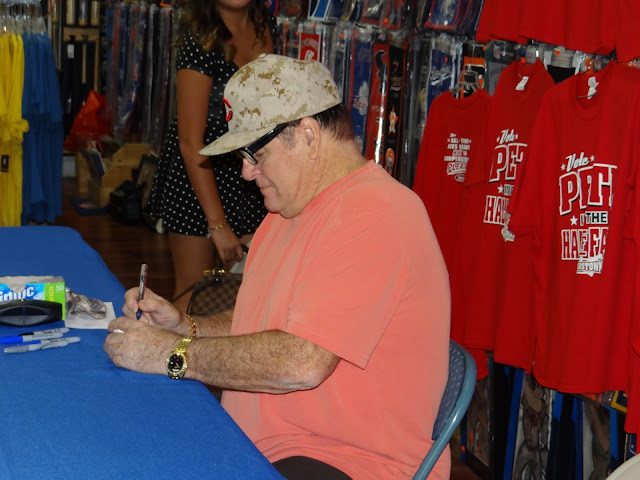 According to many fans I've heard from, he normally comes up to Cooperstown on Induction Weekend to sign autographs. With all of the support he's gotten from fans, I'm sure he does very well financially for the few days he's signing. He was all over town during the weekend, and we went to 2 restaurants that people had said he attended that weekend. We learned that Pete has some good taste in food! 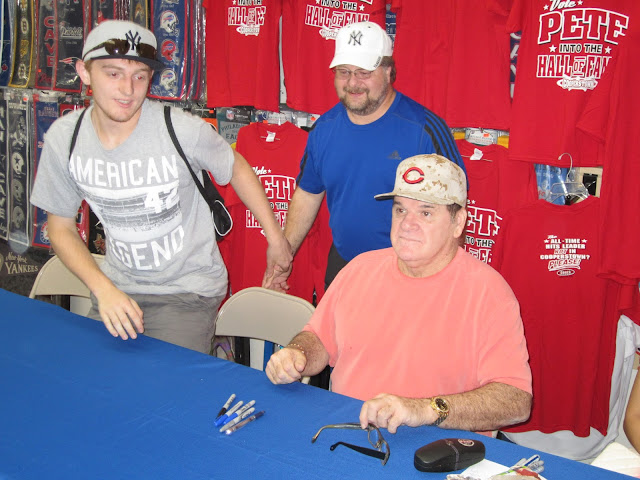 As usual, I didn't have much to say to the man, but my Dad did, saying that he made him a baseball fan. I didn't grow up watching Pete like my Dad did, but from everything I've read and seen about him over the years, I believe I would've became a baseball fan watching him too! I understand that his "crime" was a very big deal, and I think MLB did the right thing in its time, but I think it's about time Bud Selig lets this guy do his thing again. I believe he's paid his dues. 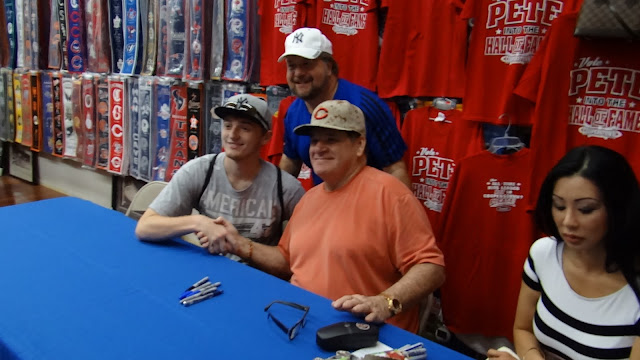 Who knows if he actually cares if he gets let back in or not though? I mean, he seems to be doing a great job selling "Bring Pete to Cooperstown" merchandise, and I'm sure he's not short on money. AND he's dating an ex-Playboy model who is 40 years younger than him! Life is good! I regret not asking Pete if I could have her autograph too! 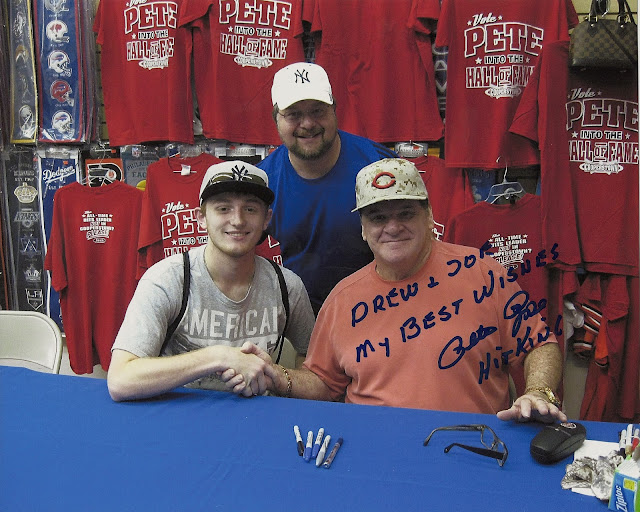 I ended up getting this picture from the signing signed by Rose, and he inscribed it very nicely too (Drew + Joe, My Best Wishes, Pete Rose, Hit King"! It only costed $5 more than any regular flat autograph to get the picture taken and printed, and then signed. While that was a really awesome addition to my collection, William's son Chris wound up stealing the show! While the picture was being developed, Chris snuck a ball to Pete and got it signed free of charge. You can read more about that here.

After getting to meet Pete, I am even more in favor of getting him into the Hall of Fame. He never impacted the game with his actions, and always gave his all. He fought for every victory he could have, and in the long run, he got a little carried away. I'm all in favor of seeing him being reinstated by Selig, who hasn't exactly been winning many fans over of late with the relatively "easy" penalties he's been handing out.

I'll be back with more to show off tomorrow! See Ya!
Posted by Drew at 7:21 PM