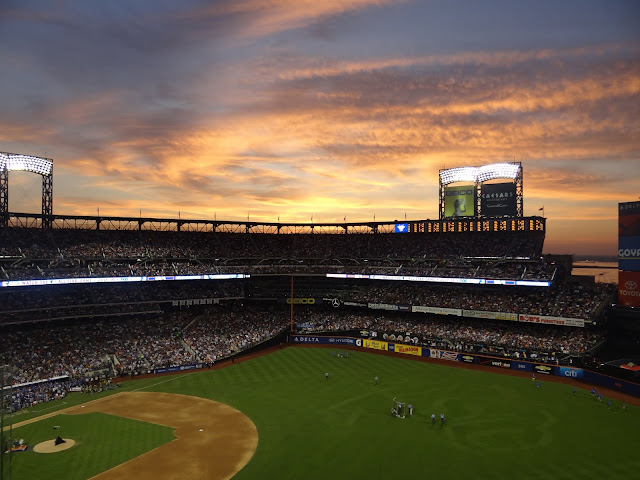 Hey guys, Drew back here! Today, I'm celebrating my 17th birthday, but before all of that gets underway, let's wrap up the story that's been dragging on and on. I hope you all have enjoyed these past few posts! 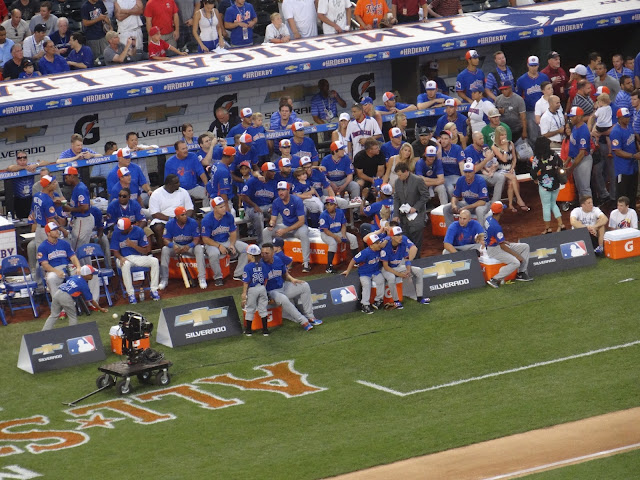 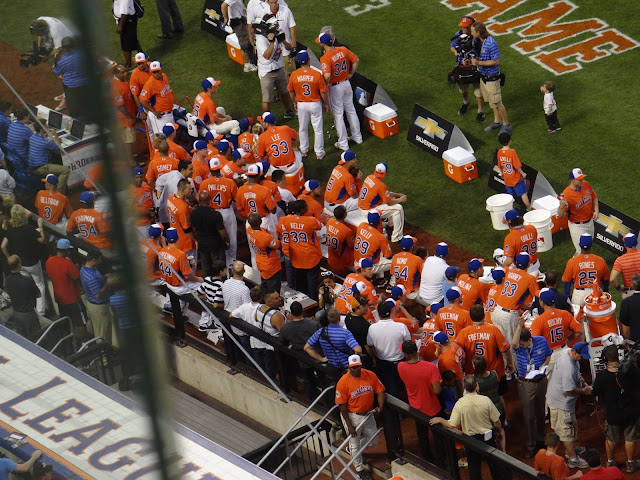 They were ready. We were ready. Finally, it was the moment we had been waiting months in anticipation for. Sure, Fanfest was exciting in its own way, but this was the Home Run Derby, the event I've watched since I first heard of its existence! 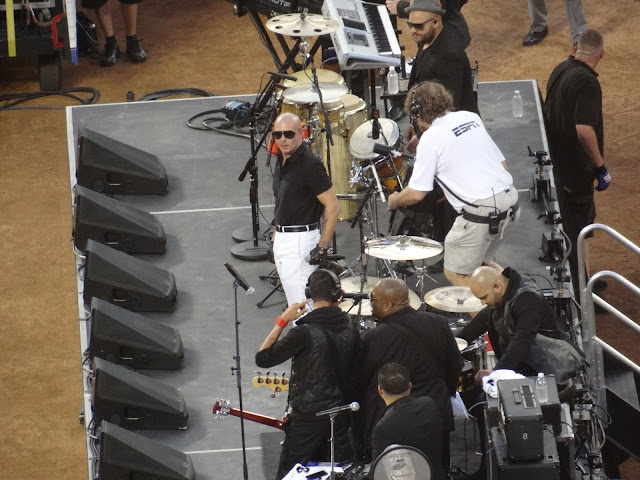 What better way to kick off the festivities then have Pitbull start the party! If you couldn't tell, that's about as sarcastic as it gets. The sound system and speakers were extremely quiet from our seats, but perhaps that was for the best. My friend Matt proved me to me later on that he lipsynched the whole time, and it was really a joke of a performance. But, he is a pretty big name, so I had to at least snap a picture. 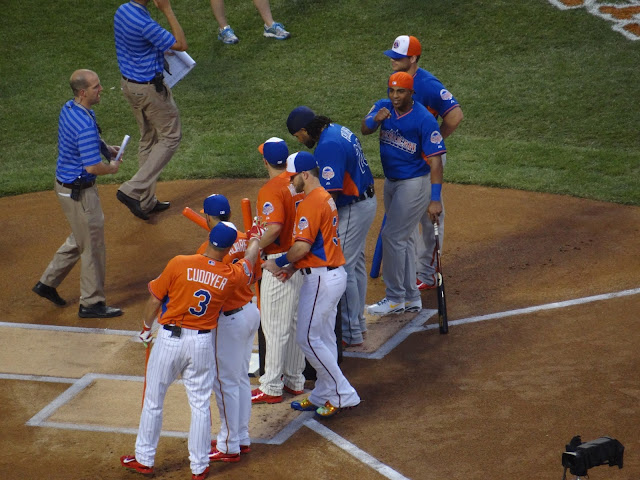 At this point, the bets were on. We did a snake draft choosing players to win the competition starting from oldest to youngest. Dad chose Bryce Harper first overall, and Mike followed by taking 2 time reigning champion Prince Fielder. I went with Chris Davis, and then Vinny chose the captains back to back. I took Cespedes, Mike took Alvarez, and my Dad ended up with Cuddyer. We put a little $ in on our players, which only made the competition more intense! 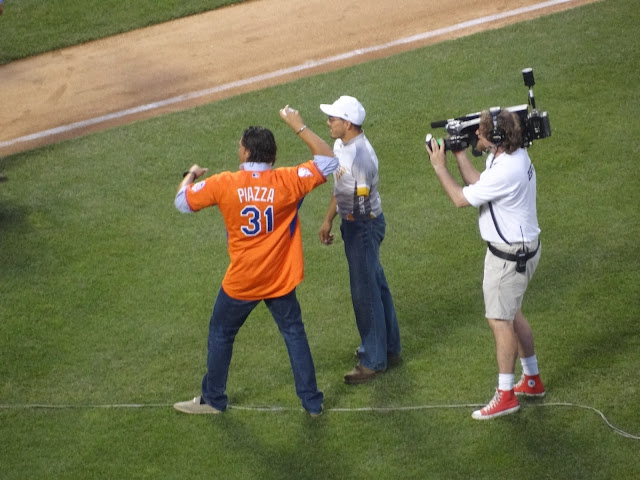 Mets legend and future Hall of Famer Mike Piazza was on hand to throw out the first pitch. He got a huge hand from the crowd, as he deserved. Considering there isn't any evidence against him, I predict that he should make the Hall of Fame in a year or two. 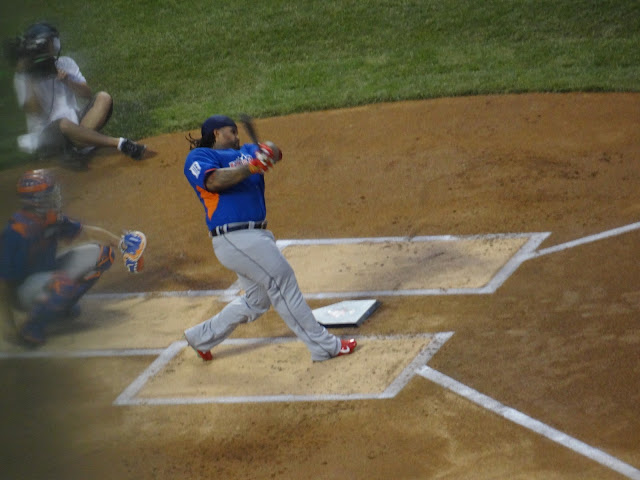 Prince Fielder kicked off the contest with 2 huge bombs, one of which taped out at 483 feet! However, he "only" hit 5 moon shots, and would not advance to the second round. 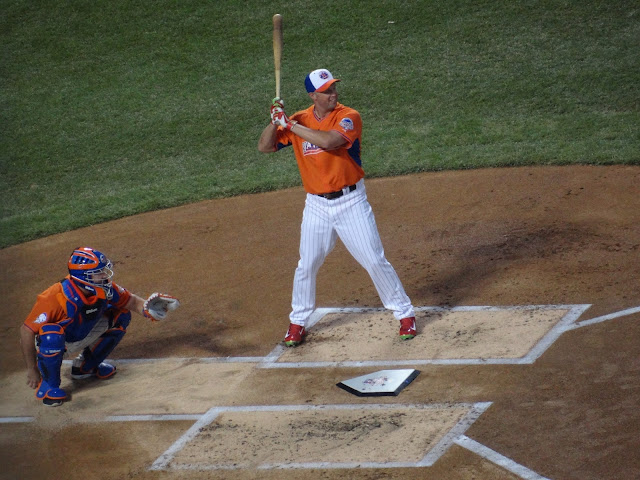 Underdog Michael Cuddyer took his cuts next, and he impressed tremendously, knocking out 7 bombs in Round 1! I've always thought he was a class act player but I wasn't quite sure why Wright picked him for the Derby. He definitely impressed me though, and although he wasn't one of my picks, I rooted for him the whole night. 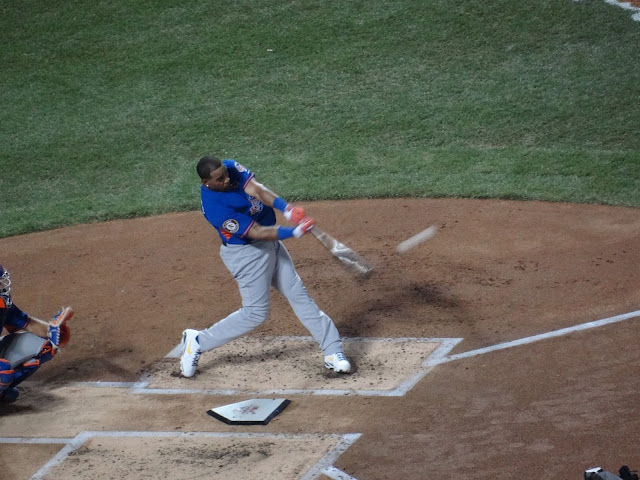 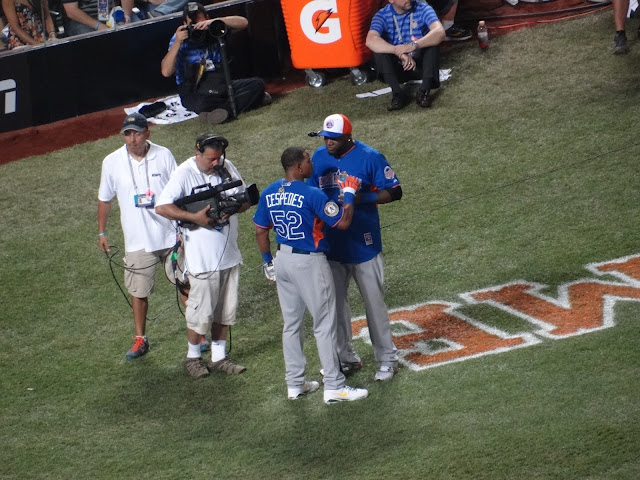 However, Cespedes stole the show, bopping out 17 balls in the first round, including multiple to the third deck at Citi Field, which projected to fly almost 500 feet each! My picked player dominated the first round, which resulted in some great bragging rights. 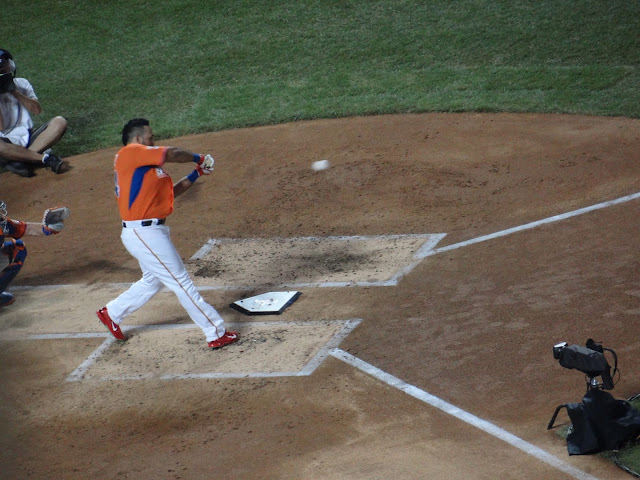 Alvarez was next, and he hit 5 home runs as well, which was a little disappointing considering the amount of power I knew he possessed. We met a guy on a bus in the city who knew "El Toro" from his childhood, and Pirates fans really lobbied to get him in the competition. He didn't do awfully by any means, but he left a lot to be desired. 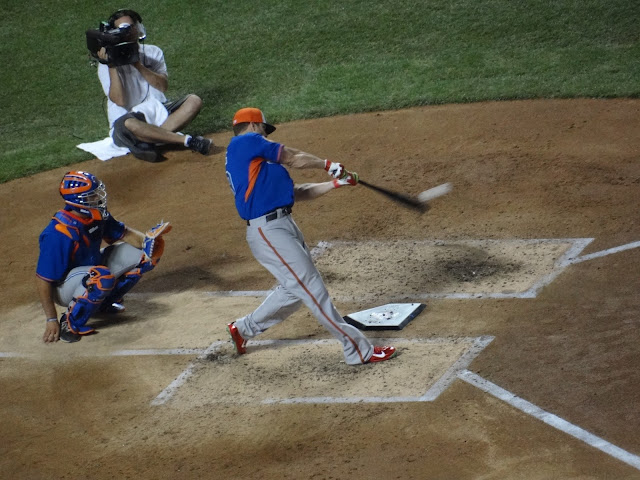 Chris Davis looked like he was taking it easy all night, and didn't seem like he was even trying that hard. But, with his effortless swing, it's easy to point fingers and judge the guy. "Crush" certainly lived up to his nickname, advancing to the second round after 8 first round dingers. 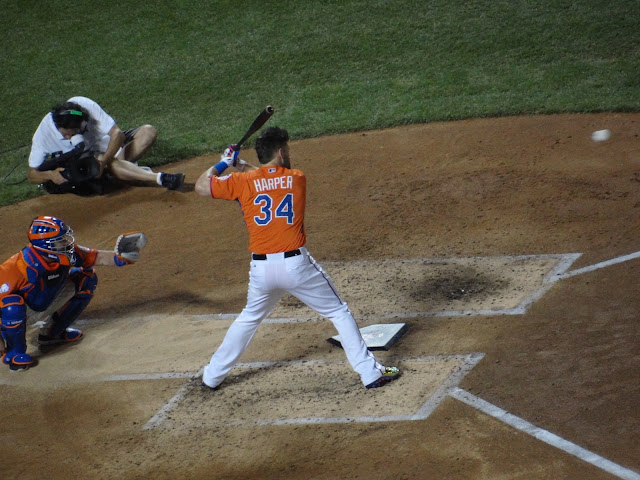 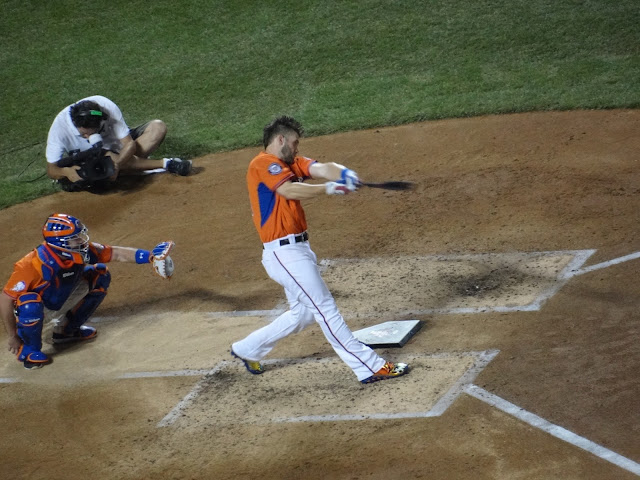 In case Cespedes didn't impress enough, we got the treat to watch 20 year old Bryce Harper showcase some of the tremendous power he possesses! Everything about him popped- the spiked up mohawk, the cleats, and most importantly: the ball off of his bat! He rocketed most of his home runs right down the line in right field, and the ball just flew off of his bat. He finished with 8 first round home runs, and advanced along with Cuddyer, Davis, and Cespedes, coincidentally, my Dad & I's two picks! 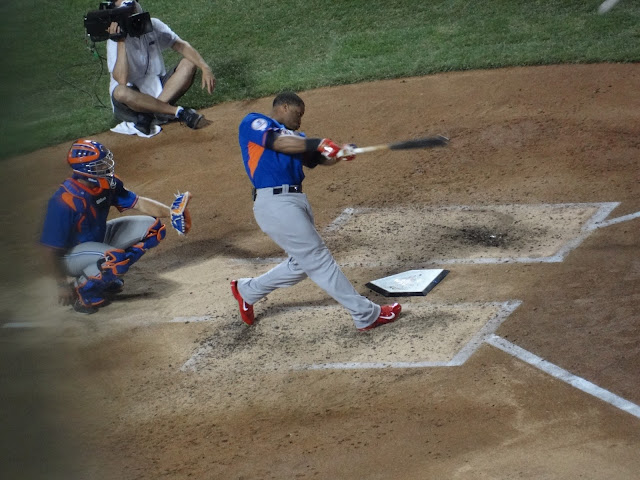 Robby Cano disappointed for the second straight year unfortunately, knocking out only 4 balls. I couldn't stand the Mets fans booing of the Yankee All Star, considering they never really had a reason to, other than being part of a team they aren't even rivals with anymore. 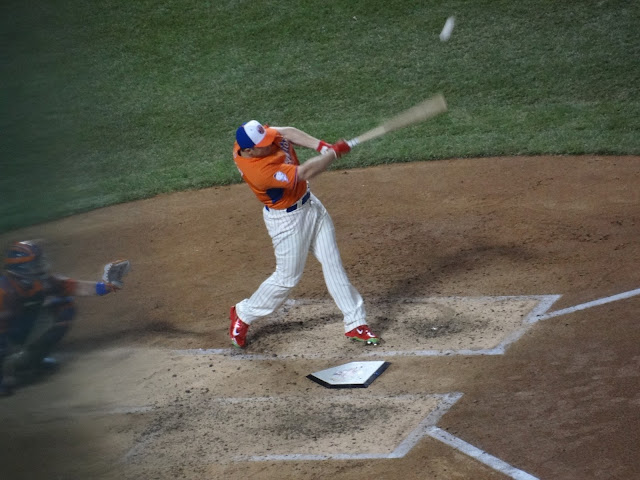 David Wright got the biggest hand I've ever heard in my life that night, but I showered in a few boo's, just in response to Cano being boo'ed as hard as he was. I have always respected David Wright, but I thought it'd be only fair to boo another player for absolutely no reason. Fortunately, he was eliminated after hitting 5 home runs, and a good portion of the crowd left afterwards. 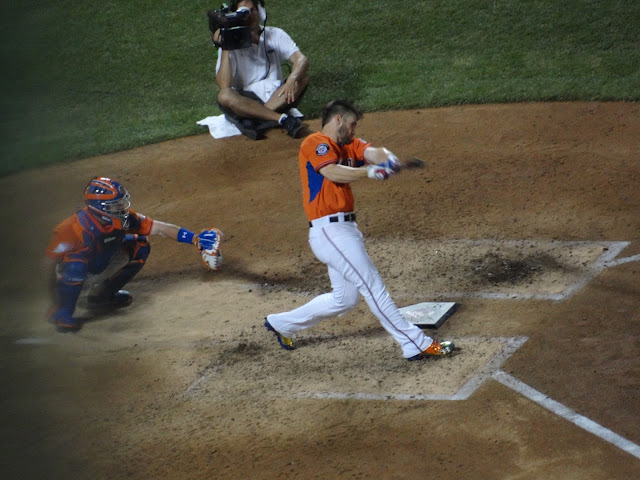 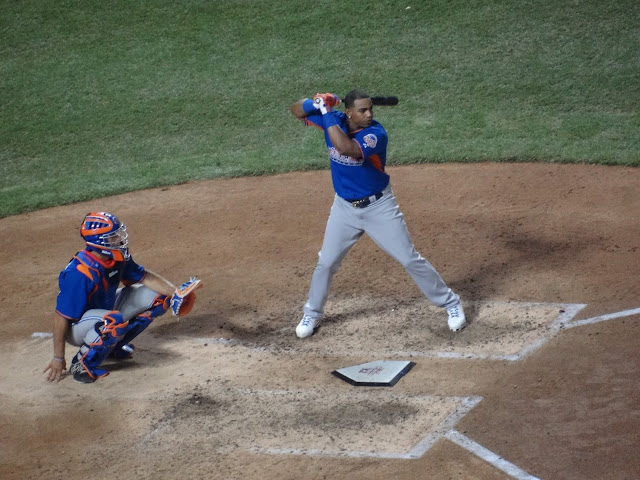 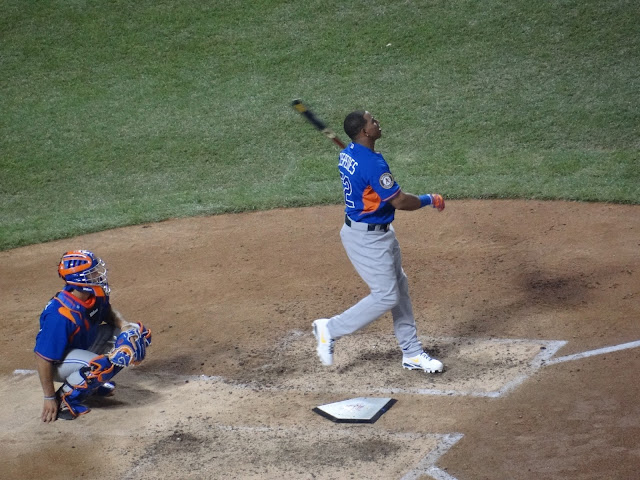 Those people were ridiculously stupid though, because two of the young phenoms in baseball still had an awful lot in the tank! Cuddyer and Davis were eliminated in Round 2, leaving Cespedes and Harper for the final round: my dad's pick, and my pick! Money was on the line as the slates were cleared and the home run counter started from zero once again! Harper put another 8 on the board, finishing with 24 home runs on the night. However, Cespedes finished it off with one HUGE blast, going 455 feet off the wall in center field below the scoreboard! Here's the swing, in case you didn't see it already:

I won the bet, and the extra money, which I used to buy off a ball that Vinny hadn't used for future signings and what not! Despite my winnings, everyone enjoyed the derby as much as we expected to- if not more, and I believe the tickets were worth every penny spent. However, our night wasn't even close to being over... Well, it turned out that the train we needed to take in order to get back to Grand Central was down. There was a fire on the track, so we had no choice but to wait in line for a different train, that came back and forth in longer time intervals. We had no choice but to wait in this enormous mob of possibly 20,000 people for over an hour. People started to get hot and the drunks began to yell at the cops. We were honestly one more idiot away from a riot breaking out. Dad told us to keep our cool, and we did, and I made great use of the free towel they gave away. It was chaotic, and by the time we got to the front of the mob for the train, the other train was back up and running. We ended up turning around and going to that train, which successfully took us back to Grand Central.

After we got on our train at Grand Central around 1:00 in the morning, we thought we were in cruise control. However, as our stop approach and we could see my dad's SUV in the parking lot, he realized that the train wasn't really slowing down. Fortunately the train stopped and we all laughed at him on our way to the exit door. We didn't make it much farther. It turned out that our car door was sealed shut, and by the time we realized the door wasn't opening, the train left for its next stop! A few curse words were chanted throughout the train as we were all outraged at the circumstances. However, Dad got us a cab to pick us up at the next stop, and we moved to a bigger exit area to ensure we would actually get out. The cab picked us up, and then dropped us off without even leaving the parking lot because he technically wasn't supposed to pick us up. Another taxi strolled into the parking lot, and although he had no clue who we were, he gave us a ride regardless. Just about anything that could've gone wrong following the Derby did, and it was quite the mess. But looking back in retrospect, it will be a day I will never forget, despite the ups and downs along the way.

Thanks so much to Dad for treating me to this incredible day. I'm glad we all laugh about how unlucky we were on the way home now, because that wasn't meant to ruin the awesome day. With that being said, I don't think I'll be heading back to Citi Field anytime soon, because its train system really isn't that organized. I don't think I'm the only fan who said that after that night. Oh well, it was a great time.

I hope you all enjoyed and got a kick out of our story! We arrived home at 4:00 AM, which made the day a whopping 23 hours long for us. But with 6 signed baseballs and memories to last a lifetime, I'd do it all over again if I could.