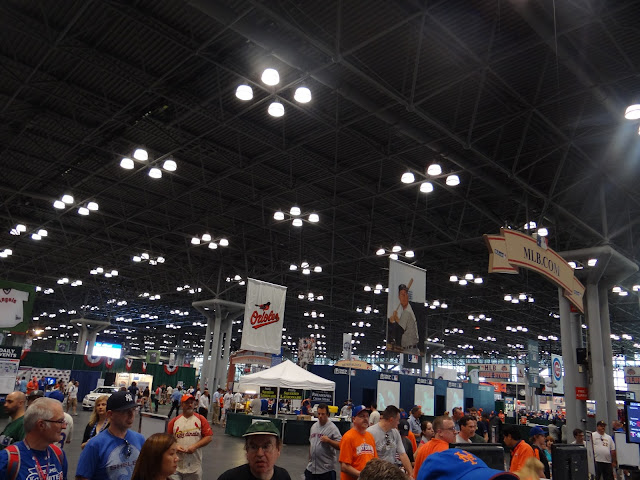 Hey guys, Drew back here! In case you haven't noticed, I decided to bring my blog back to the old design. I couldn't tolerate needing to update my Java every other day in order for the page to actually load correctly. Sorry if the site was inconvenient to any of you, but fortunately now we are right back on track. So when I left you all yesterday, I just finished showing off my "Big Hurt" and Jack Morris signed balls, after a very unlucky opportunity with my favorite player. Let's continue my coverage of 2013 Fanfest, shall we? 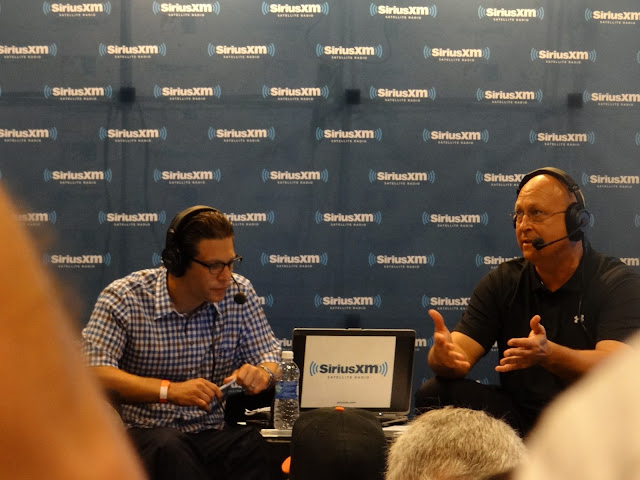 After we finished adding Morris and Thomas to our collections, we immediately bounced over the Sirius XM Radio station. Rumor had it that Curtis Granderson was there earlier and that they were planning on having Cal Ripken Jr. there along with Bud Selig later on! Sure enough, the "Ripken Baseball" interview was just getting underway at Sirius with Cal and host Adam Schein. Had we not had specific goals that day, we would've all stayed and listened to the legend talk, but instead, we rotated in and out of the station, making sure to keep our spot in case he signed autographs. While I was holding our spot, I recorded a little bit of what Cal had to say about the steroid era. Check it out: 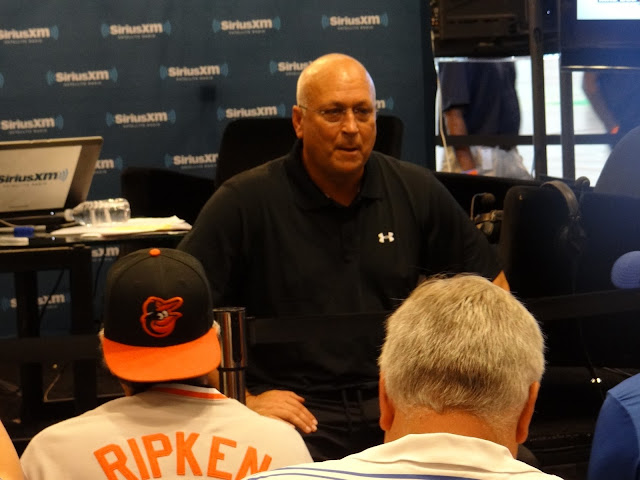 Cal spent the better portion of two hours answering fan's questions, and it was really entertaining to hear his opinions on many of the games current issues. I wasn't too concerned about getting his autograph, since I already paid to do so earlier this year. However, I wouldn't have minded a second one, and I wanted to help my buddies add him to their collections. After the interview, he signed for many of the people there, but it was probably the biggest mob I've ever dealt with in a signing before. I ditched out because it wasn't worth all of the pushing and shoving for me, while my friends hung around. Unfortunately, they were pushed around so much that after about an additional hour of trying, they came up short as well. 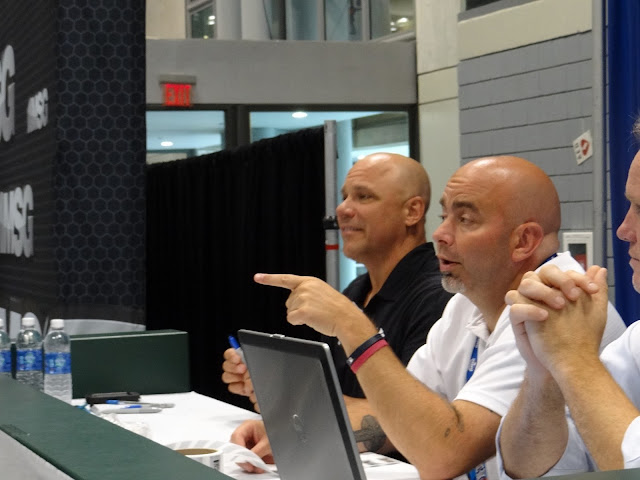 While they desperately tried to get Cal to sign for them, I moved to the WFAN station where former Yankee Jim Leyritz was signing. I haven't heard much about Leyritz since his legal troubles a few years ago, and I didn't even know if he was in prison or not. However, you could have never guessed what happened to him if you met him that day. He was as nice of a guy as they came! I told him I'm a big Yankee fan despite the Pirates jersey, and he curiously asked me why I was wearing it, and I told him it was in order to try and get McCutchen's attention. I told him how all of that went down and he seemed pretty sympathetic. I asked him if he could inscribe 1996 World Series champions because that was the year I was born, and he was more than happy to oblige. Unfortunately, the security didn't allow a picture, but I snapped a few from the bottom of the stage as I walked away. I'm glad I got to meet Mr. Leyritz because it gave me an entirely new opinion on him as a person, so I can begin to watch his classic playoff home runs again without thinking of his darker times. 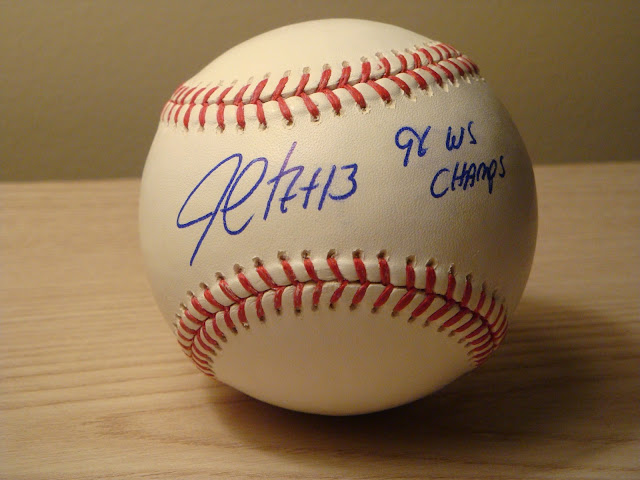 While we were in line to meet Leyritz, we overheard a few people talking about Rollie Fingers signing autographs. I didn't expect to see him there because he wasn't on the lineup, but I should've known better considering he had been there every other day of the show. Sure enough, we bounced over to the Fergie Jenkins Foundation area, which asked for $20-30 donations for any of the players signing. Bert Campaneris, Gaylord Perry, and Rollie Fingers all were sitting there with very short lines. I ended up getting Fingers while my Dad paid to get Gaylord Perry. We passed on Bert because he normally signs TTM for free and I didn't have much interest in adding a signed ball of his. 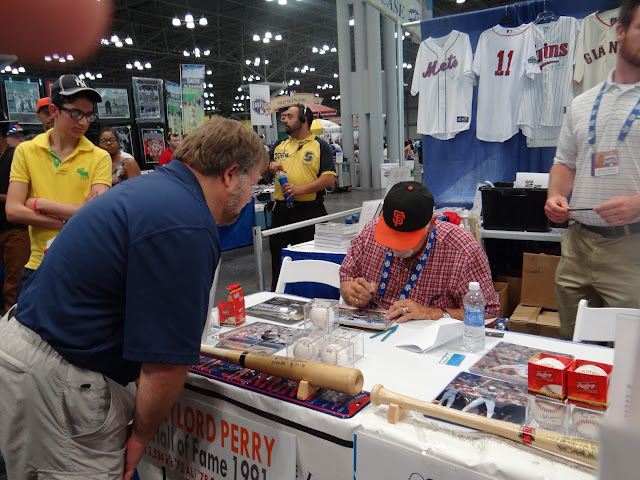 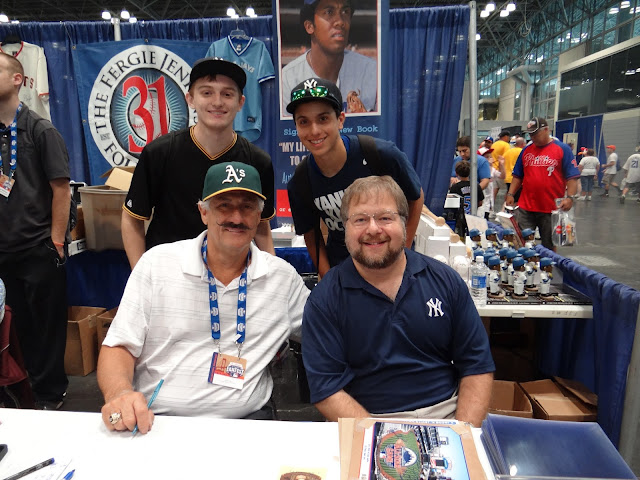 Rollie was as cool as always, and after he signed my baseball, I told him that his signature is beautiful, but not as beautiful as the moustache. I wonder how many times he's heard that one before. He was kind and friendly to us as he had been when Dad & I met him last summer, and I'm glad we took advantage of meeting him again. 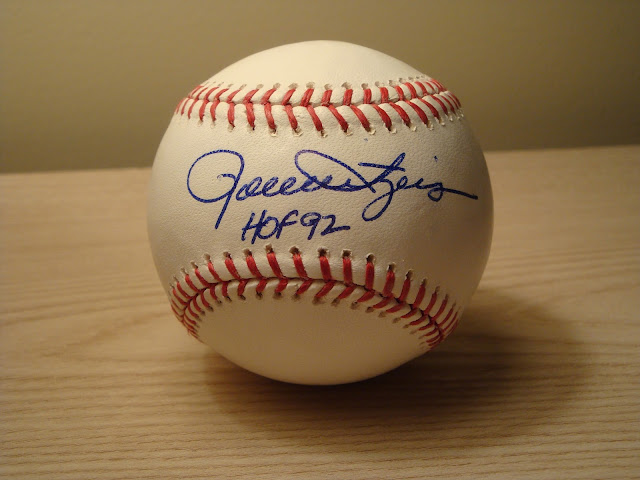 Mike was currently holding down the fort for Cal at the time, but when I told him about Fingers signing he gave up and gave in for the handlebar man. I got him a picture with Mr. Fingers and told him "long time no see"! After Mike got his autograph, we left the station and started to roam around. We saw an older man wearing a blue Detroit cap, and neither of us knew who he was.. but we decided to get him anyway. There is no situation more awkward than when you're trying to get an autograph of an unrecognizable person, however we politely asked the man if he could sign for us and he was more than happy to. He asked us "Do you want my teams?" and we said sure, considering we'd use them later on to find out who he was. It turns out that it was Pedro Sierra, a former Negro League pitcher for the Indianapolis Clowns and Detroit Stars. 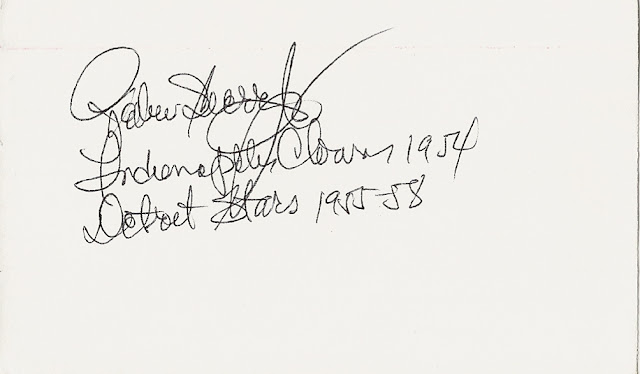 Sierra was a nice surprise, and by the time we got him and made another loop around the building, we saw George Foster enter the building and go to the Fergie Jenkins foundation. For $20, I wasn't going to pass on one of the most underrated players on one of the best teams of all time. Foster was a quiet but relatively nice guy, and he was patient enough to wait for me to walk all the way around Fingers and Campaneris for a picture. While he was decked out in Mets stuff since he played most of his later years in New York, I'll always look at him as a member of the Big Red Machine, and I had him sign the ball recognizing just that. 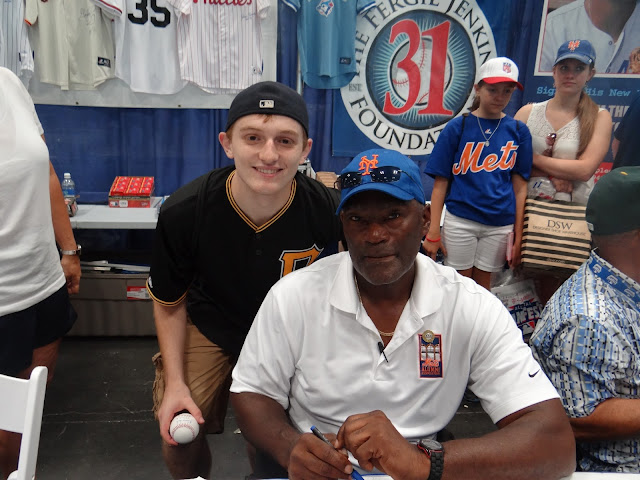 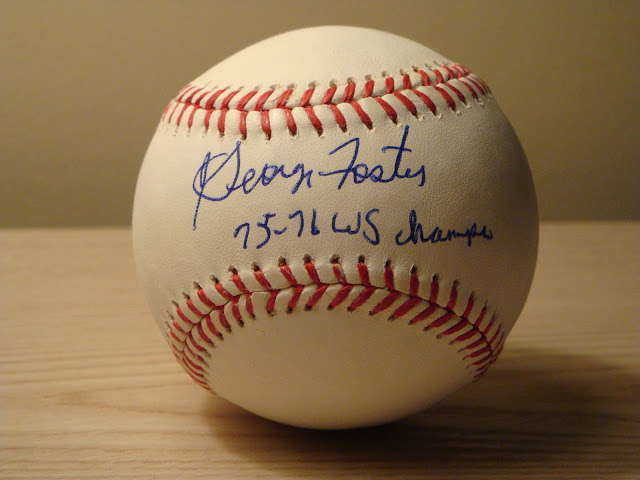 So, I believe that Foster is a pretty solid place to stop for now, and I'll have the rest of FanFest for you guys tomorrow! Indeed, there is more! Keep on the lookout!