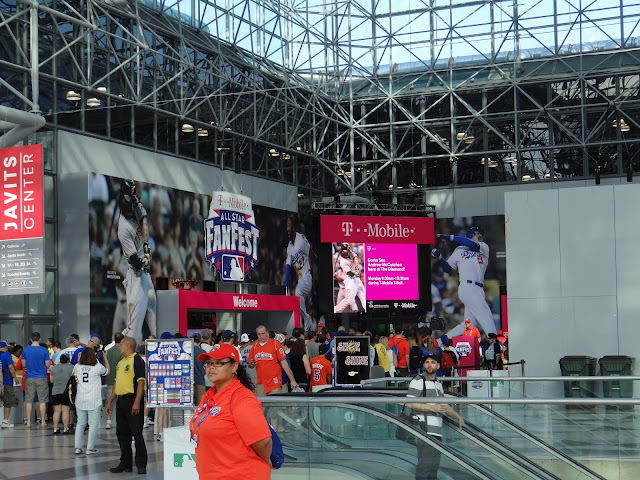 Hey guys, Drew back here! I have to tell you all, first and foremost, that Monday, July 15th was probably the longest day in my entire life. But even with that, it was definitely one of the best days I've had in a long time as well. Back in 2011, my good friend Mike happened to be on vacation in Arizona around the same time that the All Star festivities took place at Chase Field, the home of the Diamondbacks. We convinced him to go to some of the events for his own sake, and he came home with autographs from Josh Hamilton, Earl Weaver, and Miguel Cabrera from Fanfest, and witnessed New York's beloved second baseman Robinson Cano win the HR Derby in person. I was really happy to see him do well there, but from that point forward I was determined to do a similar trip when I got the chance. Sure enough, the All Star festivities took place at Citi Field in Queens, and FanFest was at the Jacob Javits Center in Manhattan! Once I heard of this news, I got tickets for some of the events, and I anticipated heavily for the day to arrive. Finally, July 15th came, and it started right at the crack of dawn. From 5:00 AM, we were ready and prepared to go to MLB FanFest. My Dad and I, along with my good friends Mike and Vinny were excited for a day we would hopefully never forget. 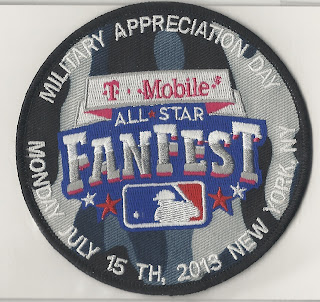 Transportation wasn't very difficult on the way to the Javits Center for us, and we successfully arrived as the doors were being opened. We got the commemorative patch as a giveaway for Military Appreciation Day, and we entered what was the largest baseball arena we've ever seen. 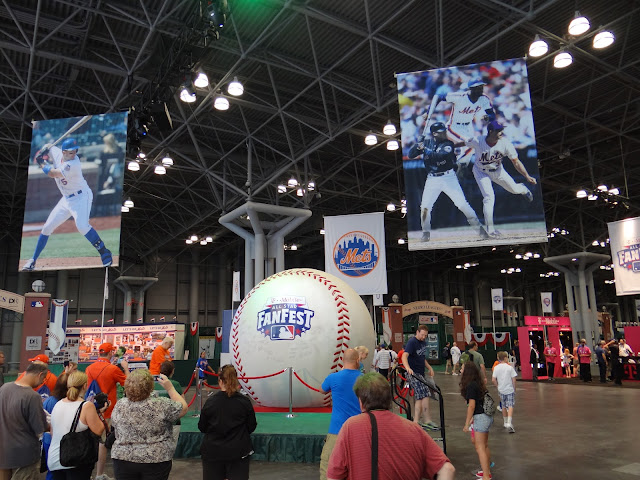 Immediately as we walked through the doors, we came across what Fanfest considers "the world's largest baseball", signed by many of the greatest players to ever live. While we promised ourselves that we'd go back to it later, we got a small glimpse of it as we walked past it. We had a goal in mind, and we wanted to be there before anyone else got there. 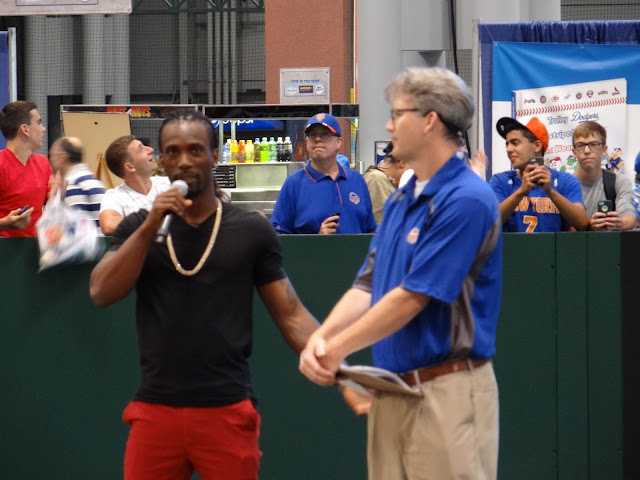 At "The Diamond" field we went to, Andrew McCutchen was scheduled to run a Tee Ball clinic for the younger kids. We got there 15 minutes before it started and claimed a great spot along the side of the field. McCutchen, as many of you know, is one of my PC players and perhaps my current favorite player, so I was really excited at the chance of possibly adding a signed ball of his to my collection. Sure enough, Cutch arrived, and we watched the whole clinic, in which he joined the Kids team, taking on their parents. He was great with the kids, and I gained even more respect for him. 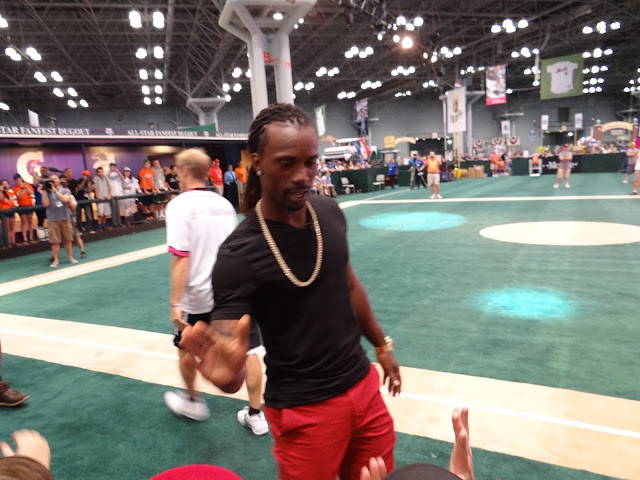 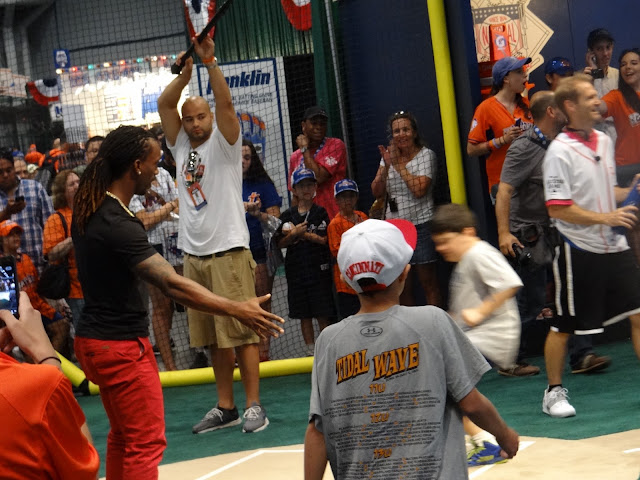 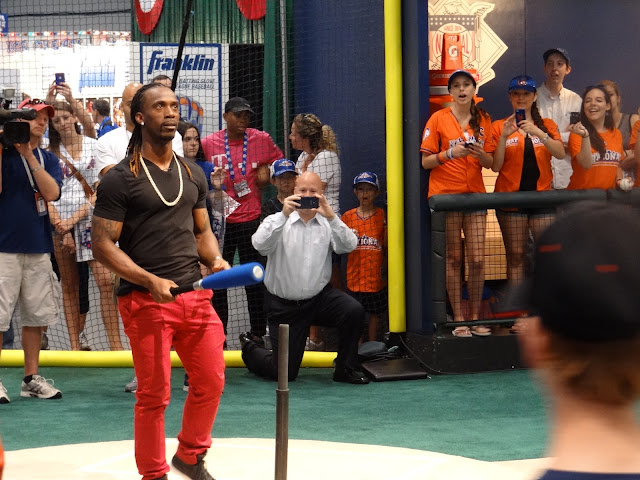 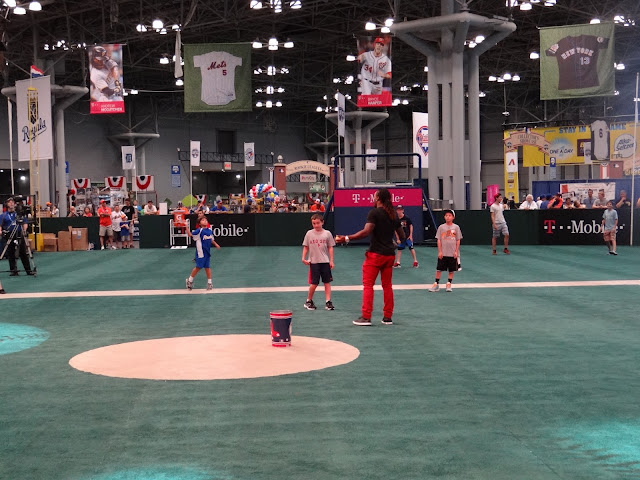 As the event was wrapping up, we got all of our stuff out and ready to go. McCutchen signed for the kids afterwards, and it was beginning to look unlikely that he would come over to us. A lady working for Fanfest actually took our balls and tried bringing them to him to have him sign them, but security refused to let her in and she brought them back. As he left, we followed the direction of the crowd and found our way to the front of the group. Security was wrapped around him like a blanket but at one point I managed to have an opening between him and I, and tried to take advantage. "Mr. McCutchen, you're my favorite player, I'm wearing your jersey!" He didn't even acknowledge me. I wasn't quiet, and I was certain he heard me. I was probably 2 feet away from him, side by side, and he didn't turn, wasn't appreciative or anything. At that point I didn't even want his autograph, I just wanted some sort of response, and I don't know how much security played into that but I feel like I lost some respect for him through the encounter.

Despite our early failures, we knew we had to bounce back because we still had a full day ahead of us. We roamed around the building for a while, but we stopped when we realized we were near the presence of a baseball player that probably could've played football. Through the crack in the MLB TV station, we saw "The Big Hurt", Frank Thomas! 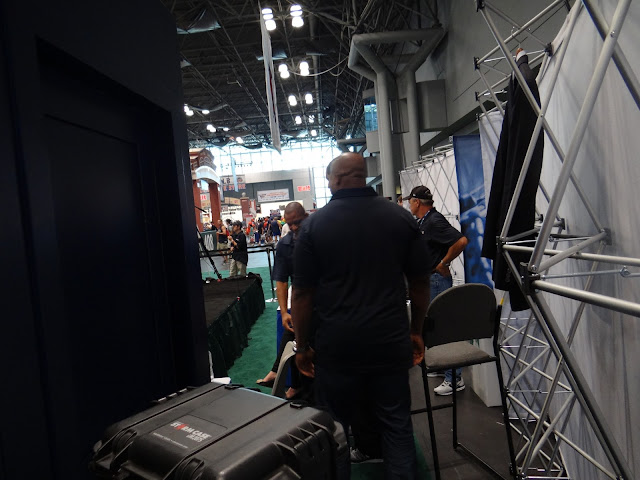 Frank was in the midst of a lengthy conversation with a member of MLB TV, but when things simmered down, Vinny asked him if he could sign for us. He said he would in about an hour, as he was about to go on air. We started a line right by the station, and tuned in to the show that was about to begin! 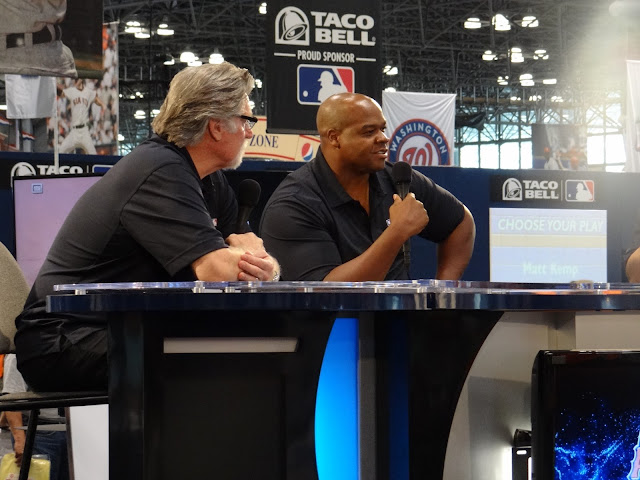 A minute or two into the show, we realized that Big Frank wasn't the only star on set, as former great Jack Morris joined him on set for the interview/Q&A session! We knew at that point that we needed to stay right there and wait for them to wrap the show up. Immediately following the show, MLB set up a quick table, and we were one of the first people in line! 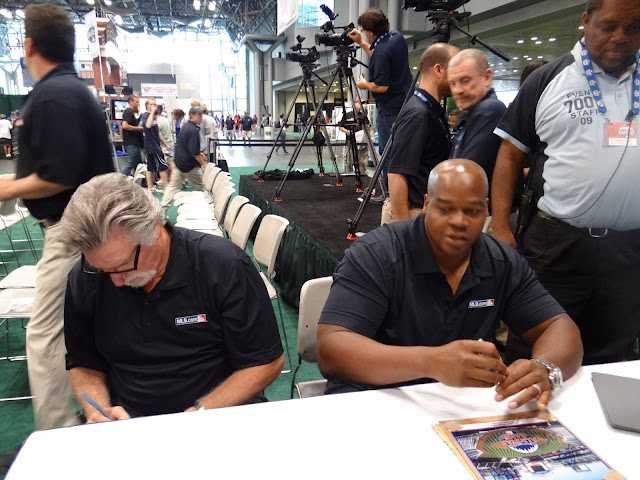 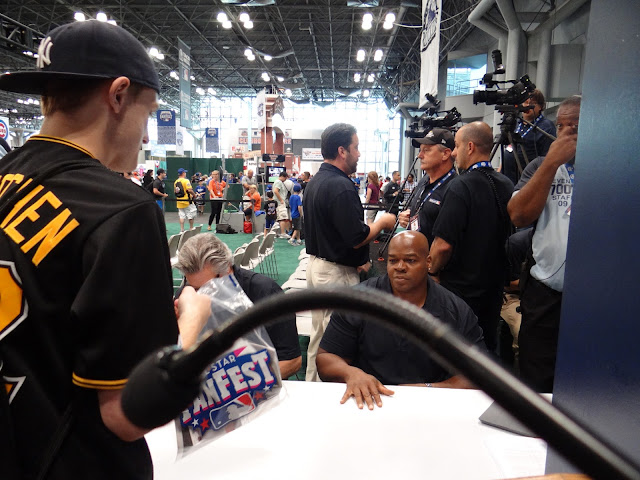 Yes indeed, all 4 of us added a Jack Morris and Frank Thomas autograph to our collections, and since Dad isn't a collector, I ended up with 2 of each! I told both of them as they signed for me that I can't wait for them to make it into the Hall of Fame, and they said they can't wait either. I told them I have my fingers crossed for them and that by signing they made me an even bigger fan. They were really awesome to us and they made up for the way McCutchen was. I still don't know how much security impacted all of that, but I still was a little disappointed my favorite player couldn't say hello to me at FANfest. Oh well. 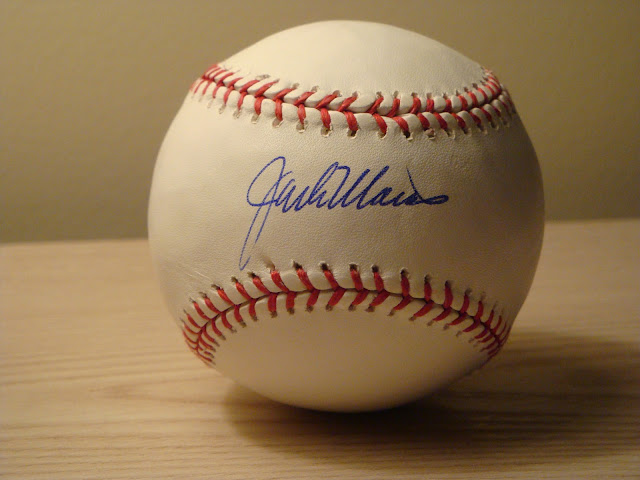 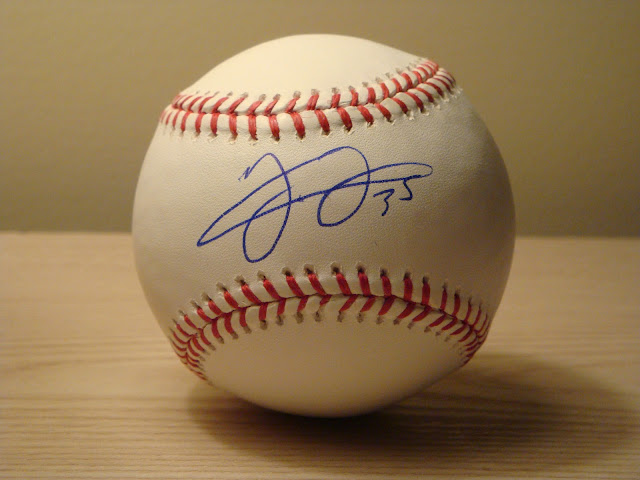 Thanks so much to Jack Morris and Frank Thomas! Part 2 of the FanFest recap is coming up soon, so stay tuned!