Hey guys, Drew back here! I've recently been trying to use some of the spare time I get to write TTM requests again, and I sent out a batch of 8 last week. Today, I came home to 2 successful returns of those 8, making for a pretty great mailday! Both players were contributing factors on championship teams that have never been forgotten by New York Sports fans! Without any further ado, here are my 104th and 105th TTM successes! First, former Mets shortstop Bud Harrelson signed 2/2 for me in less than a week! Harrelson was one of the grittier players during his era, often remembered for his fist fight with Pete Rose, but he was also one of the key contributors on the 1969 World Series winning Mets team. His career statistics didn't speak for the impact he left with the Mets, and following his player career he went on to coach and eventually manage them as well. Bud signed a 1972 Topps and a 1986 TCMA "All Time Mets" card nicely for me, and I'm very happy to add him into my growing autograph collection! 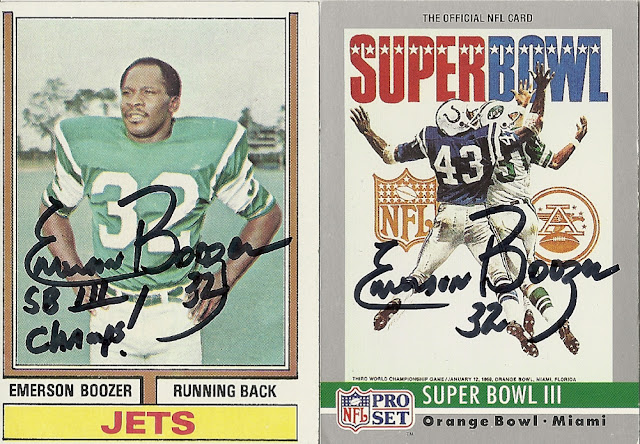 Also, today I received back from New York Jets Super Bowl winning running back Emerson Boozer! Boozer was a solid running back for the Jets in the late 1960's and early 1970's, rushing for slightly over 5,000 career yards and 52 touchdowns! He never reached his full potential due to many injuries, but his hard work allowed him to change his playing style to contribute to the best his body would allow. Boozer signed a 1974 Topps card for me, inscribing his #32 and "SB III Champs!", along with a 1990 NFL Pro Set Super Bowl III card. 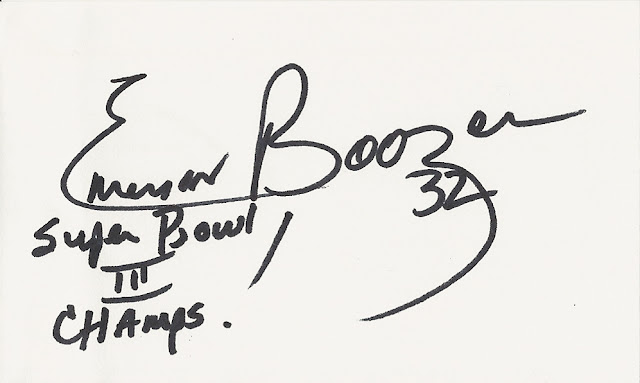 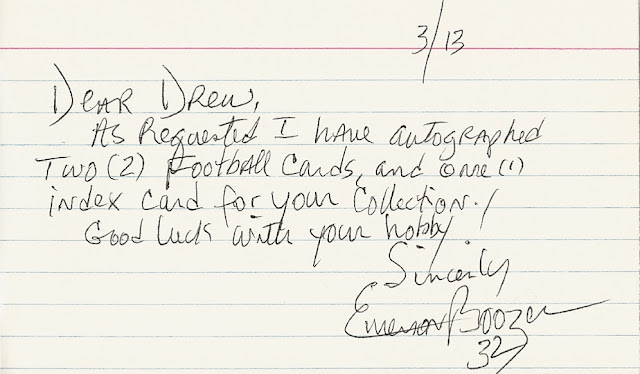 He also signed an index card for me and wrote a nice note! I'm really glad I finally sent out to him, as his autograph has been eluding my Jets collection for a while. I wish more signers would take out the time that he does!

Thank you to both Mr. Harrelson and Mr. Boozer! See Ya!
Posted by Drew at 7:46 PM