The Wright Kind of Purchase!

Hey guys, Drew back here! Well, it was supposed to be baseball season, but apparently Mother Nature doesn't agree all that much up here in the Northeast. However, we've started some indoor open gyms for our Varsity team, and I've been working towards getting ready for my 2013 campaign. As a third baseman, over the past couple of seasons I've been trying to follow the examples left by 2 particular professional players at the position: Evan Longoria and David Wright. I really like the way both of them play the game, and have tried to emulate their playing styles on the field. 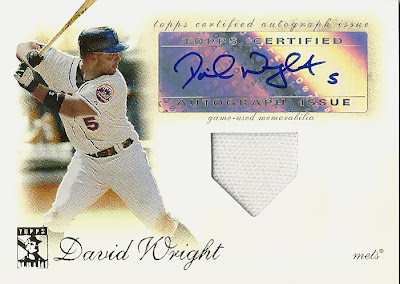 Last week I was able to find this beautiful 2009 Topps Tribute David Wright auto relic numbered to 99 for a relatively low price. I'd been wanting to add his autograph to my collection for a while, and that day finally came! Despite not being a big advocate of sticker autographs; I've always had a soft spot for Tribute cards. I've never been a fan of the Mets, but Wright is one of those guys that it's very difficult to not root for. I'm glad they locked him up long term this past offseason.

What do you guys think of David Wright? See Ya!