A Salute to Baseball's Finest Gentleman

Hey guys, Drew back here. Well, it was a rollercoaster of a Sunday for me, certainly filled with its ups and downs. The highest of highs were spent in White Plains, as Dad and I went down to spend a little money and meet some players. We had a great time, and I originally planned to begin recapping the show today if it weren't for the news my friend William reported to me around noon. As many of you have now read on William's phenomenal blog, the great Virgil Trucks passed away yesterday at the age of 95. 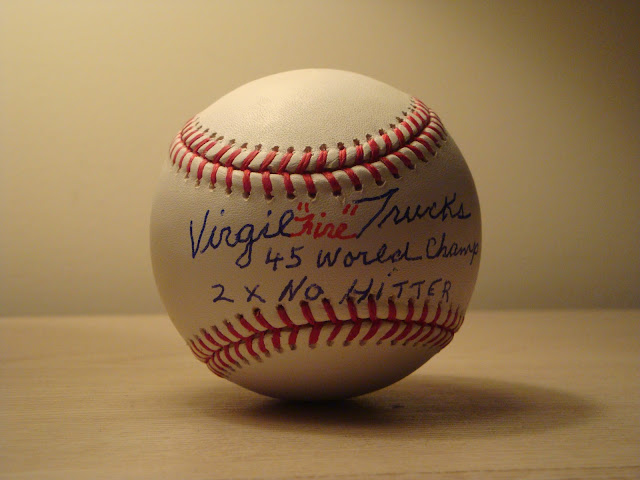 Trucks was a great pitcher throughout his 17 year career, winning 177 games with a career ERA of 3.39. He threw two no hitters in the same season, was a part of two World Series teams, and made two All Star games to top off his list of on-field accomplishments.

However, not many of us got a chance to know that side of Mr. Trucks. Instead, we know him as one of the greatest Through the Mail signers of all time. Most players in today's game are hard to reach TTM, with the exception of a few excellent signers. Most of the retired players and Hall of Famers can be a bit risky and could often lead to failure. There was no such thing as failure with Trucks. He made sure throughout his whole life that he would sign every piece of fan mail, and during the latter half of his life, he would go above and beyond expectations. 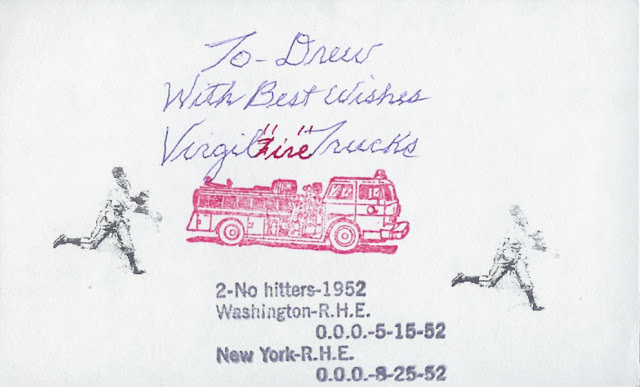 I sent a custom card and an index card for Trucks to sign back in October 2010 after hearing of his remarkable reputation with his fans. Instantly after receiving 5 autographs back from that same request rather than the two I'd asked for, I became one of those fans. He even wrote a handwritten letter to me talking about his stint with the Yankees and advising me to keep up my hard work and good grades! The experience was incredible, and unfortunately I never got the chance to thank him in person. I've received over 100 Through the Mail successes, including superstars like Yogi Berra, Steve Young, Peyton Manning, and Shaquille O'Neal; but none of those successes excited me as much as his did. He truly was a wonderful man in every sense of the word, and it is unfortunate that he is no longer with us. The world lost a great athlete, but more importantly, a great man today. 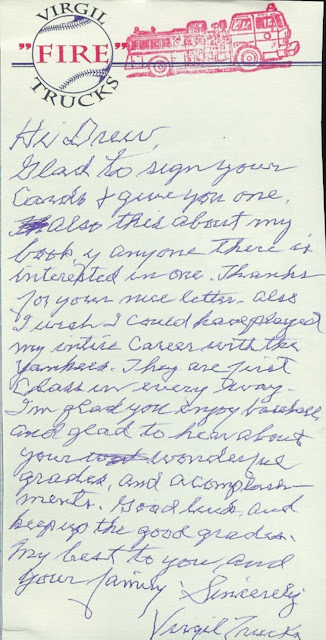 I'll leave you all with the very letter I received from Virgil Trucks two and a half years ago. Although the "Fire" may have finally been put out yesterday, Trucks' impact on our hobby and sport will carry on forever.