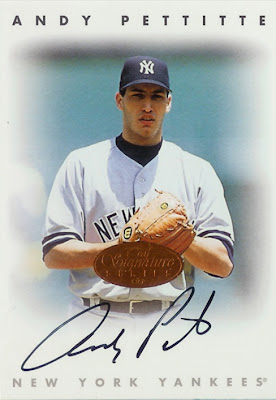 Hey guys, Drew back here! I'm a little late to the parade, but yesterday some big news came out of the Yankees spring training complex down in Florida! YES Network reporter Jack Curry was the first to report that Yankee great Andy Pettitte signed a one year, 2.5 million dollar minor league contract with the team! My dad texted me the news since he heard about it from a friend at work, and when I received the text, I was absolutely shocked. Pettitte is one of my all time favorite pitchers, perhaps even second to Mariano Rivera, so I was ecstatic when I heard the news. He is far out of his prime, at the age of 39 (40 in June), but the Yanks have had some recent success with these kinds of moves in Bartolo Colon and Freddy Garcia, so I think it's a possibility that Pettitte could take a spot in the pitching rotation this season if he works hard at it.

I wrote a post a little over a year ago dedicated to the career of Andy Pettitte, following his retirement announcement on February 4th, 2011. Although many athletes can't quite seem to officially leave the game they love (Brett Favre, Randy Moss), I really did not expect Pettitte to ever take the mound again, besides for future Old Timers Day games. But sure enough, Pettitte is back for his third stint as a member of the Bronx Bombers!

I'm not expecting a Cy Young Award, 20 wins, or anything ridiculous, but I have to say, if anybody can build a nice comeback season at this age, it's Pettitte. He's always had a strong work ethic, and will certainly build himself back into shape in no time. Besides, his "final" season in 2010 was an All Star season for him, as he went 11-3 with a 3.28 ERA in 21 starts before going down with an injury at a game I was at against Tampa Bay in August. With 240 wins under his belt, there aren't many other pitchers with the experience, class, and legacy that this guy has. It will certainly be an honor to see him put on the pinstripes for one last time.