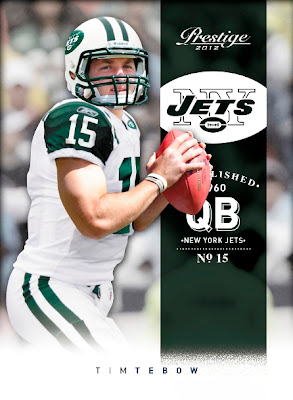 Hey guys, Drew back here. While the Giants continue to celebrate their Super Bowl title from last season, my Jets have started to make waves as well. First off, they signed safety LaRon Landry to a contract, which I think really helps them since Jim Leonhard filed for free agency. He's a proven player, with 2 Pro Bowl appearances under his belt. However, yesterday as most of you know, they were back at it, when news was first released of their trade for Tim Tebow, which only cost them a few draft picks and a little change in the long run! The move was halted as the day went on due to issues in his contract, but he wound up choosing New York over the Jacksonville Jaguars anyway. Besides the Broncos move in acquiring the aging Peyton Manning, this trade has created an awful lot of buzz around the NFL.

I like Tim Tebow a lot. At first, I wasn't a fan of his just because I thought he was overhyped and a future bust. He was a huge talent in Florida during his college career, but the way he plays as a quarterback is much different than anything we've seen in a long time. Nonetheless, he proved his haters wrong (including myself) last season when he led Denver to the AFC Divisional Round. His late game rallies and comeback wins made him perhaps the most beloved athlete in 2011 throughout the whole country! I think logical fans knew he wasn't going to end up being the next John Elway, but they thought it was awful cool to see a player of his caliber succeed at the highest level. Everyone jumped on his bandwagon and "Tebowed" it up last year, again, including myself. He really brought that personal affection for sports out in a lot of fans, and made us remember why we enjoy it so much.

The best part is that Tebow is one heck of a leader, on and off the field. He often is the center of jokes about his extreme religious persona, but honestly would you rather have a true leader or someone who is the center of controversy? I don't think that is a very difficult question to answer, at least in my opinion.

Unfortunately, the Jets have a bit of a conundrum in this situation, in that they already have a starting quarterback in Mark Sanchez. While many Jets fans have lost hope in Sanchez's ability to lead the team, they have to remember he was good enough to bring them to two consecutive AFC championship games. He received most of the blame in last season's collapse, but had his offensive line and running game been more effective, I'm sure he would've done better. People forget just how talented Sanchez is, and they jump to the Jets overall record of 8-8 to try to prove that he's a bust. I've always liked Mark Sanchez, and while admittedly I was very frustrated with him at certain moments last year, he is our quarterback afterall. The Jets signed him to a 3 year extension a week or so ago which was to guarantee he would be the starting quarterback for a few more years.

But, with the addition of Tebow as a backup quarterback, only more pressure mounts on the 25 year old to perform well. Sometimes competition works as an advantage for a team, but sometimes it doesn't. The thing with Tebow is that I can see him coping with being a backup quarterback well enough to let Sanchez have another opportunity to shine. He has a strong work ethic, and will make Mark compete for the job, but all in all, he won't end up with the starting job because of the Jets offensive system. Sanchez could either take the Tebow move in one of two ways: 1) He'll welcome Tebow in with open arms and will work harder to ensure that he keeps the job, or 2) He is upset about the signing and doesn't want anyone stepping onto his turf, so it affects his on field performance. We'll have to wait and see how it goes.

I like the move though, being that they only gave up a 4th and 6th rounder, and have to pay $5 million due to his no-trade clause. We also received a 7th round pick as well, which kind of balances out the 6th rounder we gave up. Going into the 2012 season, I would much rather use our 4th round pick on Tim Tebow than an unproven rookie who will most likely not end up panning out. Plus, with the hiring of former Dolphins head coach Tony Sparano as an offensive coordinator, the Jets will use their Wildcat system more often than they did last year after losing Brad Smith to the Bills. Tebow will be a perfect fit in that case. It's a risky move, because of the pressure fans put on players in New York, but if anybody can succumb to that pressure, it's the former Heisman trophy winner.

From a hobby standpoint, the Tebow merchandise/card prices will rise even higher than they already have, which is typical for any player arriving in New York. I don't plan on buying any of his extremely expensive autographs any time soon, but I'm definitely in support of the deal, granted everything sits well with our GQ-model quarterback. The Jets certainly don't need more turmoil in their locker room.