Hey guys, Drew back here! It's been a heck of a day so far today, as Dad and I were at the White Plains Card Show for the 9th time! Normally I don't try to go to all of the shows, but the lineup was too good to pass up this time around, so Dad and I took the trip down! I was able to accumulate enough money since the January show to bring what I usually have on me, maybe a little less. Unfortunately, a lot of the money I spent went towards supplies and pictures for autographs and what not. Dad helped me out once again as always, proving yet again how awesome of a dad he is, so we were alright in the end! Before I get to the main highlights, let's warm up with some set pickups!

One thing at the show that Dad and I focused on were the two sets I've been collecting: 2011 Topps Tier One relics, and 1961 Topps. Both sets are very different, so it never gets boring to collect them both. We balanced both sets out pretty well, getting quite a few needs for each set. We'll start with the '61 set! 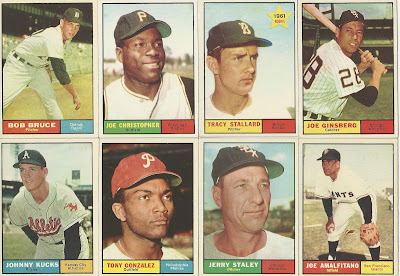 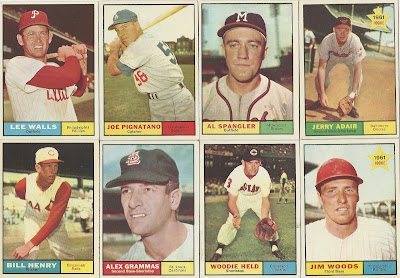 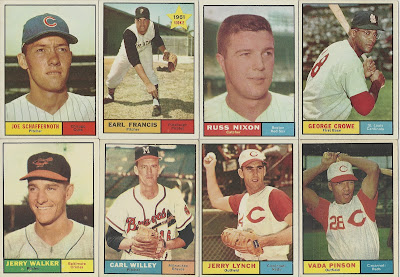 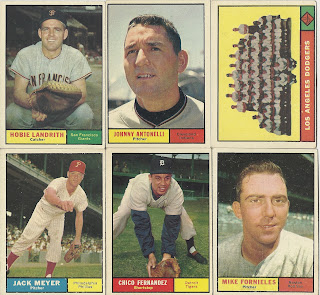 Dad really helped me attack the first 100 cards in the set in this show, which means a lot of random names came up. However, a few solid names such as Vada Pinson and the cards below certainly made it fun to pursue them all today!

Not one, but two cards featuring Hank Bauer were needed for the set chase, until now. We got these three cards from our good friend Hunter, who, along with his friend Rich, are my favorite vendors from the shows. They're always there and they give us very nice deals. Tomorrow you'll see what Rich was able to do for me, which was really awesome. Anyway, we also knocked off the card of then-skinny Don Zimmer! Zimmer wasn't much to write home about as a player but I've always liked him during his coaching career with the Yanks during their pennant run in the 1990's. 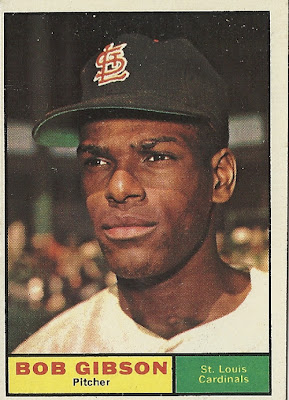 However, the best 1961 Topps pickup we made at this show was undoubtedly this Bob Gibson card, #211! Gibson was perhaps the greatest pitcher of the entire decade of the 1960's, and this card shows him before he gained a massive amount of confidence and dominated for years to come. It's in fair condition, especially for the price we ended up getting it for. He was one of the last big name base cards I needed for the set, so I'm glad we were finally able to knock him off the list. Carl Yastrzemski, Roberto Clemente, and Ernie Banks still await.

So, all in all we knocked off 34 cards in the set, with 3 doubles scattered in between! This pushes us up to 241 cards out of 587 in the set in total, a solid 41%! If any of you have any 61's laying around for trade, please take a look at my list of what I have at the top of my sidebar! Thanks everyone, and thanks to Dad as always for taking me to the show and helping out so much!