Hey guys, Drew back here. So, there was one main reason I went to this October card show. Had I not been born and raised a giant Jets fan, there wouldn't have been much of a point in going to the show. However, JP's Sports hooked us Jets fans up with a sweet addition to the lineup. Time to reflect on an amazing experience!


PART 4:
THE NEW YORK
SACK EXCHANGE!
My dad grew up around the Jets, but was a little young during their Super Bowl winning season. What he remembers most from his younger years was this late 1970's- early 1980's Jets defensive line, consisting of: Joe Klecko, Marty Lyons, Abdul Salaam, and Mark Gastineau! Klecko was Dad's all time favorite football player and he and I were both extremely excited to have the opportunity to meet him!

The players stalled 45 minutes before they came out to sign, so Dad held my spot in line while I went and bought a few things, including a holder for the football I planned to have the 4 of them sign! When we came closer to the front of the line, we realized there was one free inscription. Rather than doing something original, Dad looked up the Sack Exchange's best season, 1981. You'll see what the inscriptions are very soon. 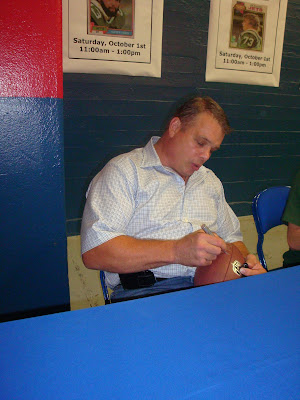 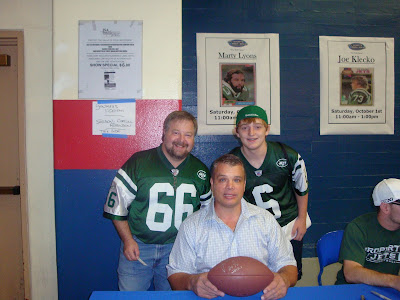 The first player we met was Dad's favorite, Joe Klecko. Klecko was an above average defensive lineman throughout his day, and could be considered the best player among the four we met that day. He made 3 Pro Bowl teams, and was the second player ever to be elected into the Pro Bowl in 3 different positions. Many former players argue Klecko should have been considered more for the Hall of Fame, and the Jets honored him as the 3rd retired number in Jets history early last season. Dad had a blast getting to meet him, as he was a very nice guy, getting a picture with us and signing our football with the inscription we asked him to do. 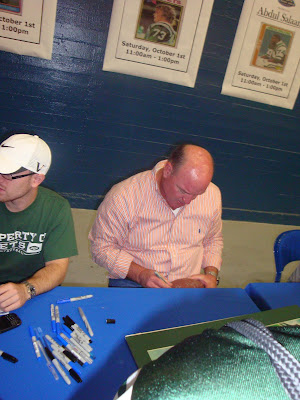 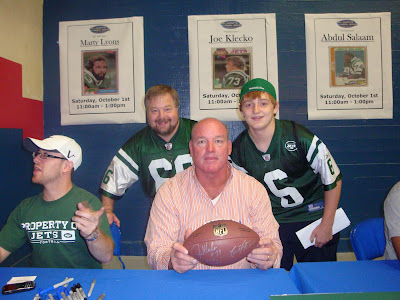 Next up was Marty Lyons, who was the Jets first round pick in the 1979 NFL Draft. He was a fairly decent player during his career, and was known for some pretty dirty plays, especially "giving the business" to Jim Kelly (see below)! Lyons was a really nice guy and talked about some of his charity golf tournaments to us. He kindly posed for a photo and gave us the inscription we asked for. 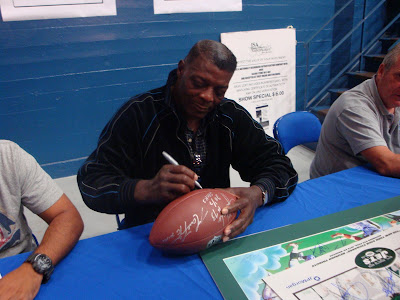 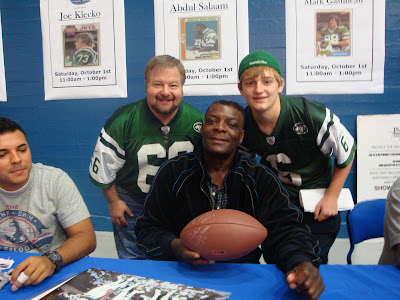 The third of the four players we met was Abdul Salaam. There isn't too much to say about Salaam other than he was a big guy and I think he may have tied Dwight Gooden for the record for biggest hand I've ever shaken in my life. He changed his name from "Larry Faulk" to Abdul Salaam early in his career because his new name meant "servant of peace", and he wanted to be known as a peaceful man. Like the other two, Salaam was a great guy and after noticing we forgot to ask for an inscription, we went back and he added that in for us before we walked away without it, which I thought was really cool of him. 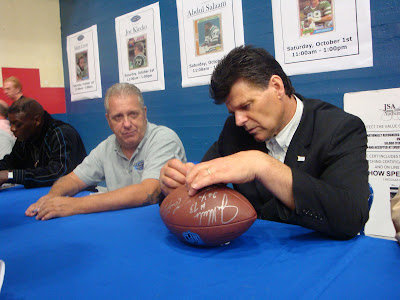 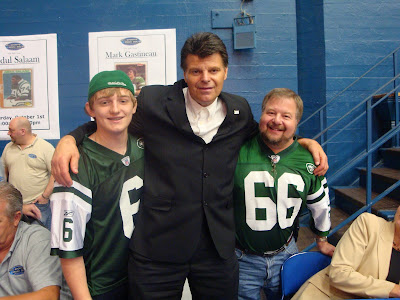 The final member of the Sack Exchange was Mark Gastineau. If there was any competition between who was the top guy of the line, Klecko's biggest threat was Gastineau. Recently, the NFL Network ranked him as the 8th greatest pass rusher of all time. His 107 career sacks is a Jets record to this day, as well as his single season sack record of 22. Among his other accomplishments were his 5 straight Pro Bowl selections, as well as winning the Pro Bowl MVP in 1984. He was the most popular of the Sack Exchange, and here is a basic summary of his career:

He was always known as a tough guy, having been arrested for domestic violence and drug issues in the past. But, boy had he changed when we met him. He now is apparently a major believer in his religion, and considers himself a changed man. Dad told him all about my grades in school and my accomplishments, and Gastineau asked me if I played any sports. I told him I play 3rd base for my school baseball team, and he asked what was more important, sports or schoolwork. I said "School I guess" and he said "You don't guess, school IS the number one focus". He was such a down to Earth and nice guy, and was my favorite of the four we met just because he took his time out to talk to us. Plus, that picture with him tucking my Dad basically under his armpit because my Dad is so short is a memorable one for sure! 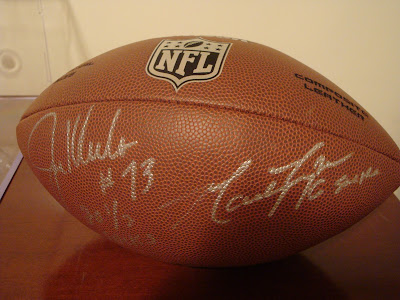 On to the autographs! I found this unopened football laying around in my closet just before the show, and I thought it would be neat to add a signed football to my collection. So, I took the ball, and got all four of the players to sign it! 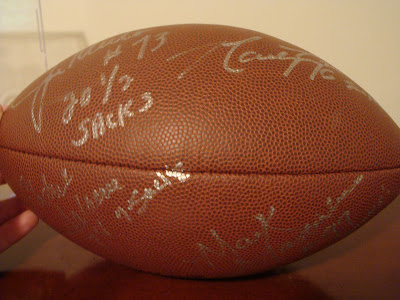 The unique part about the ball is that I got all 4 of them to inscribe their sack totals from the 1981 season, in which the Jets had a total of 66 sacks, with a whopping 53.5 of them coming from the Sack Exchange!


I thought it came out great in all! Now, the only question is what I should do with it! All in all, the Sack Exchange really was an exciting part of a good Jets team. They brought the team back to the playoffs for the first time since their Super Bowl winning season of 1969, and while they never won they certainly displayed a hard nosed way to play football!
What do you guys think of the ball? See Ya!
Posted by Drew at 8:50 PM