Hey guys, Drew back here. Well, it's catch up time now for me here, as I certainly have my share of stuff to post for now. As a blogger, you need to enjoy these moments while they last, because it sure does suck when you can't think about what to write about! Today, I'm gonna share with you guys what my good friend Ryan sent me a few weeks ago. Ryan and I have been talking on and off for a little while now, and he's definitely an awesome guy. I feel bad because I haven't found the time to hit him back yet for this package but I most certainly will in the coming days! For now, here's a look at my end of the deal: 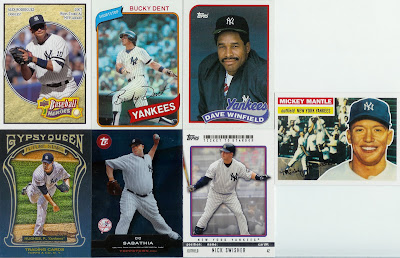 First off were some mixed Yankees cards Ryan generously threw in, my favorite of course being the 1956 Topps Mickey Mantle card. Not too bad for a toss in! Okay, it's just a Topps insert guys, you all know I'd be worshiping the ground Ryan walks over if he actually sent me a real 56' Mantle! However I did need the insert so it's all good. I have to say, that Phil Hughes Gypsy Queen "Future Stars" card looks pretty sweet too. 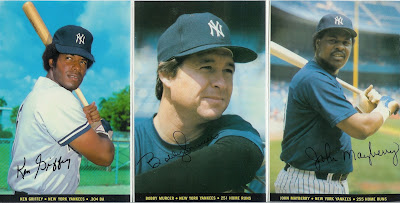 To be totally honest, I didn't and still have absolutely no idea what these cut outs are. On one side of each of the 3 cut outs, there's a Yankee player (Griffey Sr., Murcer, Mayberry), and on the opposite side there are photos of Dave Kingman, Willie Wilson, and Mike Schmidt. They look cool with the facsimile autographs for sure, and the photographs used are pretty nice! If anyone could identify what these are I'd greatly appreciate it. 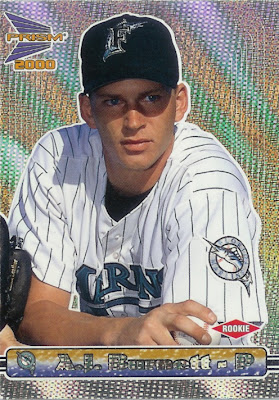 Well... I like the design at least! Kidding aside, here's a 2000 Pacific Prism AJ Burnett rookie card! AJ hasn't fared all that well in New York, and yes I do admit to be part of the growing clan that wants him out of the Bronx, but throughout his career he has had some of the best stuff in the game, although he's had some difficulty finding out how to use it. Hopefully next season he will! 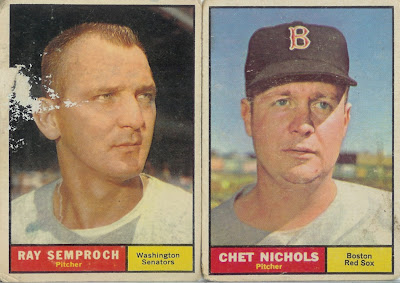 Finally, the only part of the trade I knew I was getting all along were these 2 cards for my 1961 Topps set of Ray Semproch and Chet Nichols! With these 2 cards, I am now officially 400 cards away from completing the set! Oh joy! Both cards, particularly the Semproch, have some damage but I really don't care right now because they fill a spot in the set that can be improved on at any time in the future!

Well thank you Ryan for the set help and other goodies! I promise to have your stuff out very soon!
See Ya!
Posted by Drew at 5:46 PM