Hey guys, Drew back here. So, there was one thing that hadn't been posted yet that I thought deserved it's own little special post! Well, a lot of you know about Dad and I's hot streaks in the past, winning the door prizes at the shows. I mean, between Mike, Dad, and I now, we've won them 5 times. We haven't cheated, but we've just gotten an extreme amount of luck. Just before we met our Jets players, we heard that a certain Joe won the first door prize! Dad took off out of the line, claimed it and came back with time to spare! Check it out: 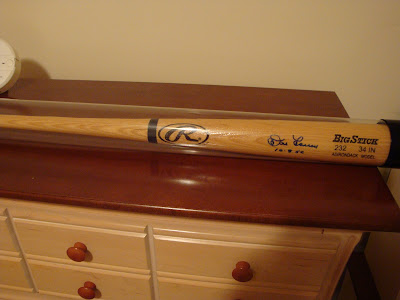 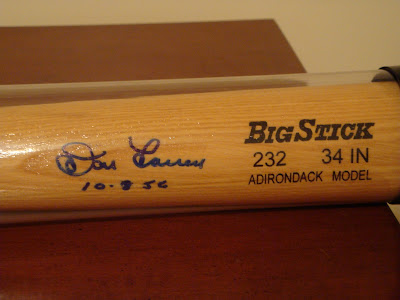 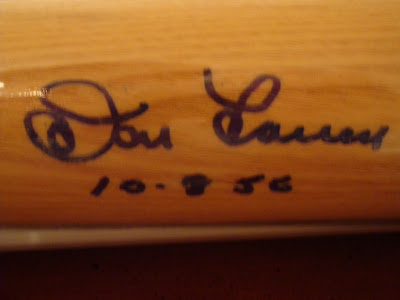 Yep, we won an autographed bat by Don Larsen, with the perfect game inscription! At first thought, I wondered, why the heck did they want Larsen to sign a bat, I mean, he was a pitcher after all! But then, I remembered that maybe while he wasn't known for his bat, there was no DH rule when he pitched in the 50's and 60's, meaning that he did have to hit every fifth day. And actually, after having talked to William about it, and after him doing a little research, it turns out Larsen was a career .242 hitter, with 14 career home runs! Not too bad for a pitcher! He batted .306 in 49 total at bats in 1958, clubbing 4 home runs!
Of course, the point of the piece was not to emphasize Larsen's decent hitting career but to just have a nice piece signed by a Yankees great! I'm not disappointed with this whatsoever, and I'm glad because it came with JSA Authentication and a bat tube. This is my 1st of hopefully many more signed bats to come, and I guess it's a pretty darn good start for a Yankee fan like myself!
All in all, this card show lived up to the hype I had for weeks, about meeting some former great football players, and to have a good time. Thanks so much again to Dad for taking me and treating me all day as usual, and for my good friend Matt too for coming along and checking out the hobby from our angle!
See Ya!
Posted by Drew at 7:19 PM