Hey guys, Drew back here. Things are slowly started to come back to life here on the blog, and I love being back. Sure, I have plenty of plans coming up, but the amount of free time for me increased by so much of late. My summer goal is to clean the countless tubs, binders, and boxes, and get some lots sold on eBay to clear space in the collection, so I don't overflow my house. If anyone has any good experience selling things on eBay, please comment based on how your experience has been with the site. I've bought a countless amount of things off of there but I haven't sold anything before.

Anyway, I got a TTM back the other day, and here it is for all of you to see: 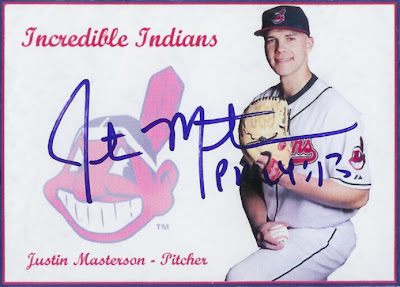 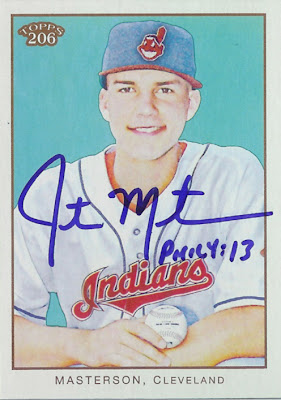 The third and final Cleveland Indian I sent to was their ace, Justin Masterson! Masterson may only be their number 2 pitcher this year to Fausto Carmona in terms of order, but in terms of performance, nobody has topped Masterson for the Tribe this year. He's had some rough starts of late, but currently he's sporting a 5-6 record with a 2.98 ERA in 16 starts. He's slowed down along with the rest of the Indians squad, but I still could see him as a solid 4 or 5 guy in any team's rotation.
Masterson signed 2 cards for me, the first being a custom, and the second being a 2009 Topps 206 base card. The custom actually looks decent for a change, without much damage at all, and it was signed nicely with his "Phil 4:13" Bible inscription. However, my favorite was the other card because it came out sweet! His autograph is different, and I gotta say I'm a fan of it.
Thanks Mr. Masterson! See Ya!
Posted by Drew at 12:18 PM