Hey everyone, Drew back here for the first time in well, too long. I can't believe how long its been. I usually begin each post talking about how long its been, but this post gap crushes any of the previous ones. I've been around, as many of you have seen me on Twitter and Instagram amidst my absence. But to the rest of you, I hope you had a wonderful Halloween, Thanksgiving, Christmas/Hanukkah/Kwanzaa/etc., and New Year!

I have quite a bit to share with you all, and I really don't know how I'm going to do it. I haven't put time towards the blog in any way, but I decided to renew it anyway in January in hopes that I would end up posting again. Hopefully I can try to take the next few months to give you some sort of idea as to where I've been. Similar to Michael Jordan, I took some time to explore some new ventures, realized they weren't quite as appealing (not drugs, I swear), and returned to what I thoroughly enjoy. Yeah, I just compared myself to MJ, have at me.

First; however, I wish to share this past weekend's adventures in New Jersey. Dad and I made the trip for the third consecutive year to the Hilton Doubletree Hotel in Fort Lee, where MAB Celebrity organized another fantastic Yankees autograph show. The lineup was stacked as usual, with 12 players from the 1977 World Series team in attendance on Saturday (and Ralph Macchio!). I used some of my Christmas funds to add some desperately needed names to my Mona Lisa; the Mickey Mantle 16x20 I've previously showed off. 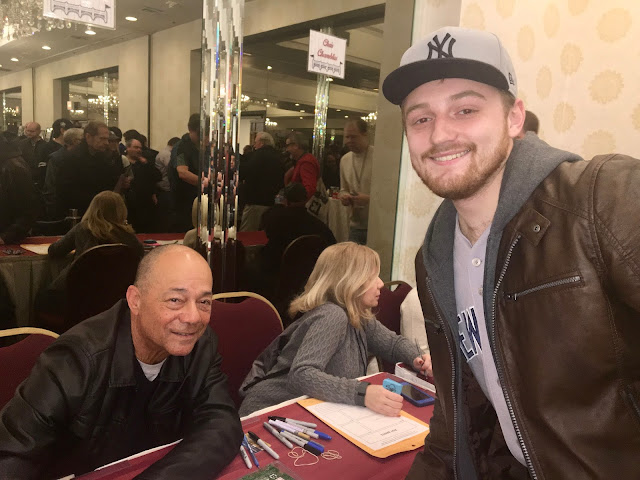 If you've read this blog in the past, you may know about my affection for Roy White, former Yankees left fielder from 1965-1979. I met him at a local Holiday Inn card show when I was probably only 8 or 9, and he was the first player I ever met. I was probably the most excited kid in the world all throughout that day; knowing I had an autograph of a former big leaguer, and better yet, a Yankee.

I've since met him several other times over the years at various shows, and he's always been very soft spoken but kind and courteous. The last time I met him, he signed an 8x10 copy of the picture of he and I (see here). This time, I finally had him sign the project I've been working on for about 5 years now. Dad brought up that I have pictures with him that really show me growing up, and White seemed bummed that I didn't have them on me to show him. I certainly plan on meeting him once more just to show him those. He's as classy as they come. 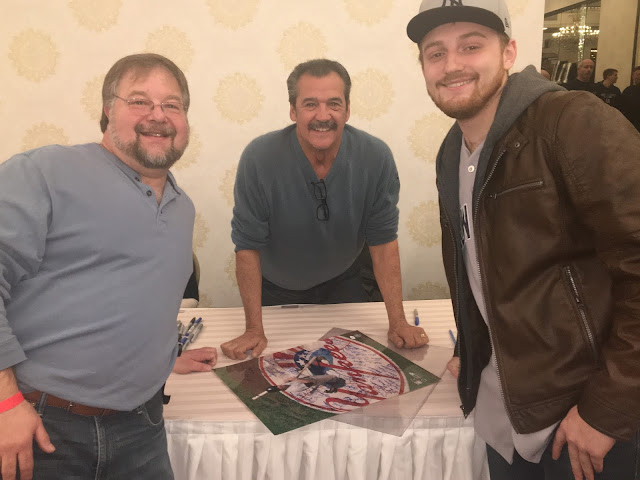 Next, we had an unexpectedly bizarre experience with "Louisiana Lightning" himself, Ron Guidry. Guidry is not a frequent signer in the Northeast. I believe he still lives in Louisiana, which is part of why I've never had the chance to meet him.

Anyway, before we went up to shake his hand, we stopped at our good vendor friend Joe's table to catch up. He wanted to enhance our moment with Guidry, so he pulled out an old check of Guidry's from a box for me to give to him. The check emerged inside a lot of memorabilia Joe had purchased in the past, and it contained Guidry's Social Security number on it. It probably wasn't a good thing that his check was floating around, although Joe wouldn't have done anything to harm Mr. Guidry or his family.

Dad and I eventually got through the crowd and up to Guidry, and I told him exactly what Joe wanted me to tell him. He took the check, glanced at it, and then turned to his son, befuddled by the odd surprise. His son looked at the writing on the back of the check, and noticed it was his mother's, and they both grew concerned that their personal information could've been in anyone's hands. They were both appreciative of us and of Joe for giving it back to him, and he awarded me with being able to fit his signature into a noticeable gap on my Mantle project. 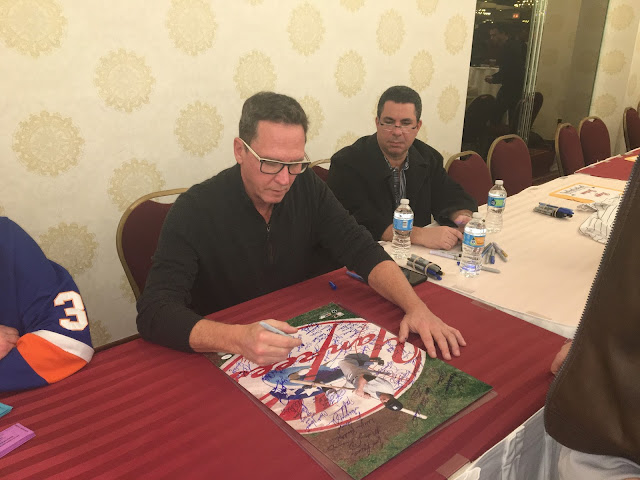 At that point, Dad and I wondered just how this could get any better. Several minutes later, we found out exactly how when we met one of the three perfect Yankees pitchers, David Cone! I've always been a big fan of Cone, especially because I've grown up listening to him contribute to a lot of YES Network content. I was a toddler during the 1990's dynasty run, but watching highlights of those teams certainly helped me become the baseball fan I am now. 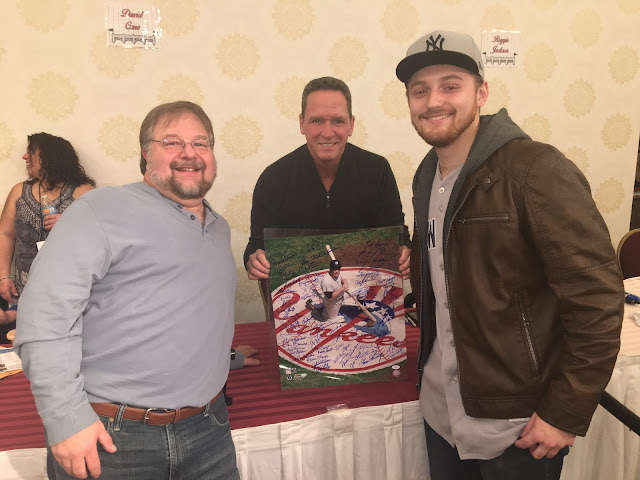 When I passed my picture over for to Cone to sign, he said "wow, that's impressive, it looks like you've put a lot of effort into this". I thanked him for the compliment, and told him his signature would make it even better. He responded by saying he was honored to have his name on my picture, and thanked me. And when we gathered around the table for a picture, he picked up my project and showed it off for the shot, as you see above. 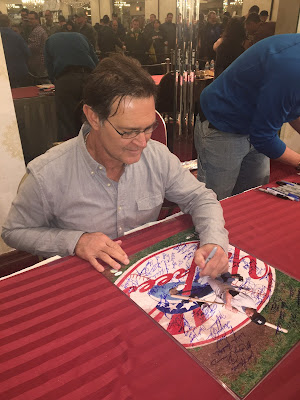 The final player I had a ticket for was the best one, in my opinion, with no disrespect to the greats who came before. Don Mattingly, for the first time in a long time, was back to do a local signing. It hasn't been ideal for the former Yankee captain and MVP to make the journey north for signings considering he's been managing in Los Angeles and Miami since 2011. I actually met him once back in 2010 in White Plains when I was only 13, and I frankly don't remember much from it. 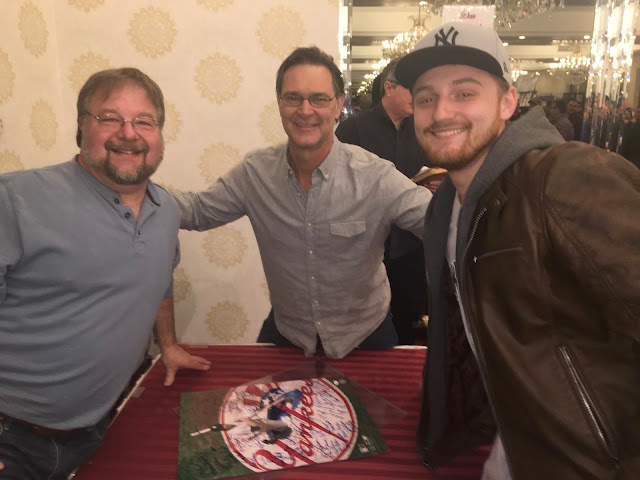 It wasn't an easy year for Mattingly, as he lost his ace, Jose Fernandez, in the tragic boating accident back in September. However, he was in good spirits on Saturday, and we really enjoyed getting to talk to him for a little while. I wished him good luck in Miami next year, and we gave our condolences to him for the tough loss. He really seemed to appreciate what we told him, which was a satisfying feeling for sure considering he's one of our all time favorite players. 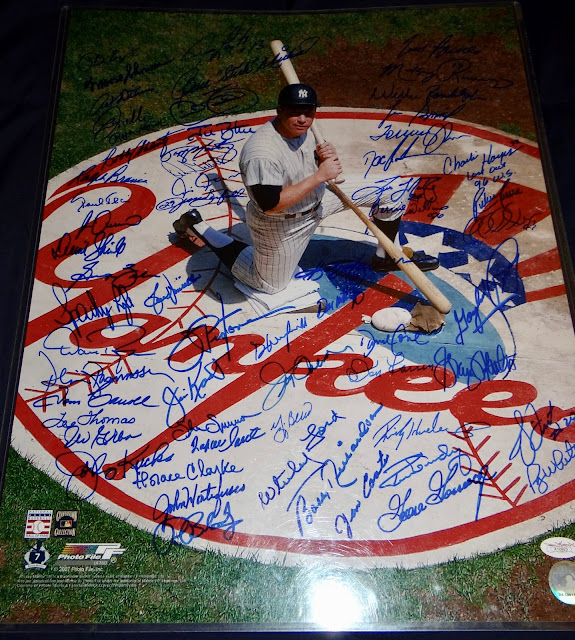 Here is an update on my Mantle project as it currently stands. With the additions of White, Guidry, Cone, and Mattingly, I now have 62 total autographs gracing the photo. I won the picture in a door prize at a White Plains card show with 29 signatures already on it, and have since added 33 of my own. Four Yankees captains and 8 Hall of Famers (including Tim Raines, who finally got his call to the Hall) are among the many gathered around "The Mick". I don't believe I'll be able to fit many more signatures, but there are a few guys I've saved some room for. 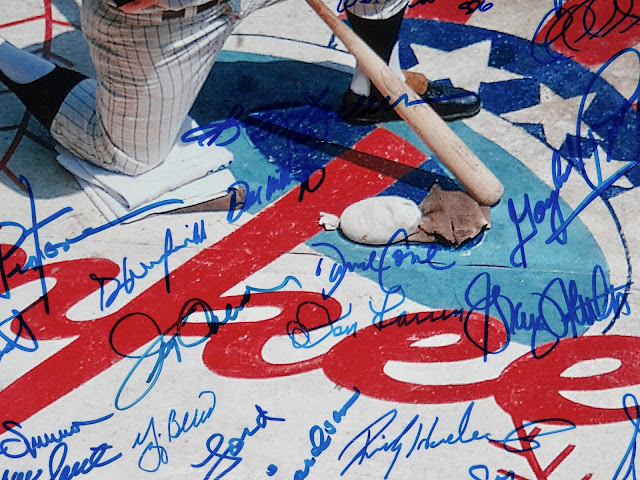 If you look closely, you can see Mattingly's small autograph to the right and above Dave Winfield. I wanted to make sure the two former sluggers would be close to one another. You can also find Cone's signature right above Don Larsen. Because Mattingly signed so small, I have enough room to try and get David Wells too to complete the perfect game trio! 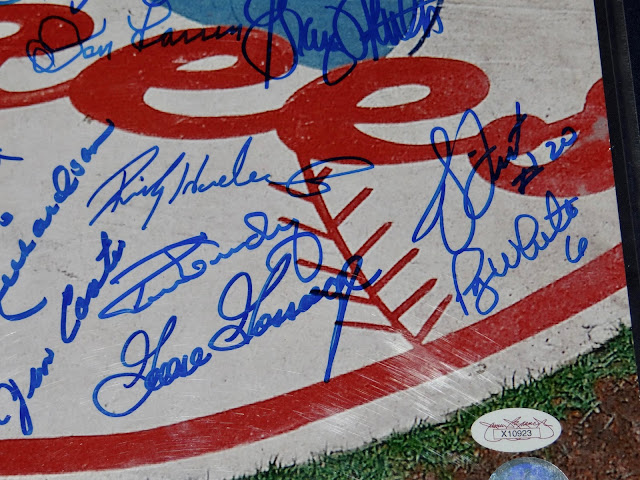 On this picture, you can see White's signature to the right of Goose Gossage's and below Bucky Dent's. Also, you can see the small space Ron Guidry squeezed into between Rickey Henderson and Goose. 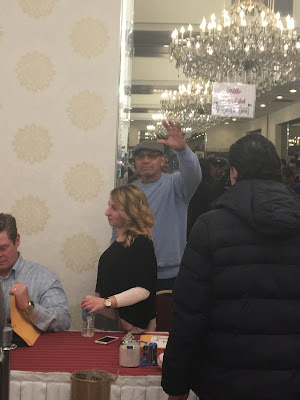 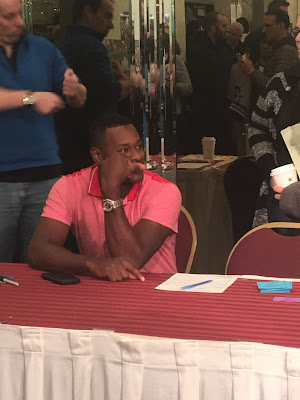 Once again, this show was a major hit for Dad and I. We've had some great experiences with Yankees past and present greats through MAB, but I do wish the room was bigger. There are multiple vendors inside the already small room, and people end up crushing each other trying to get towards the front of the pack to meet the people they bought tickets for. The show organizer kept telling people to make room for others, but the only way we could was by getting in the way of the vendors and their tables.

In addition, there was a point where Reggie Jackson, Don Mattingly, David Cone, Luis Severino, and Willie Randolph were all signing. If you're going to hold a show in such a tiny room for a large audience, I wouldn't suggest putting all the headliners at the same time. If they were spaced out, perhaps it wouldn't have felt so cluttered and uncomfortable. If I didn't have to go to this show, I probably wouldn't, but the lineups have been so good I can never resist. Luckily, the players made up for any of the issues and were as respectful and classy as can be.

I do have one more thing from this day to share with you guys, but I'll make a separate post of it. Don't worry, I won't be disappearing for 3 months again, at least for now I can assure you.

Thanks for reading, and have a great day! Spread the word baby, because...