It's hard to believe that in just over a week, I will be living in a different country. I don't think that is going to fully hit me until I get to Italy next week. There is still quite a bit of work that needs to be taken care of before I set sail (metaphorically), but it's right around the corner now and I couldn't be more excited to see what life looks like from the other side of the pond.

In January, I've gotten three through the mail successes, continuing my recent surprisingly hot stretch. All of these requests were initially sent as late as this past summer. I don't have exact dates because of an iPhone update gone horribly wrong. 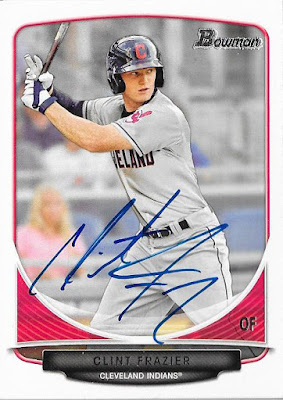 No offense to the following two successes, but this was by far my favorite of this mini-bunch. I've been a fan of Clint Frazier since the Indians drafted him in 2013. He's only 21 years old and ranks as one of the organization's top all around prospects. Frazier batted .285 in high A ball and was also successful in this past year's Arizona Fall League. I hope he continues his good fortune and becomes an everyday player for the Tribe! 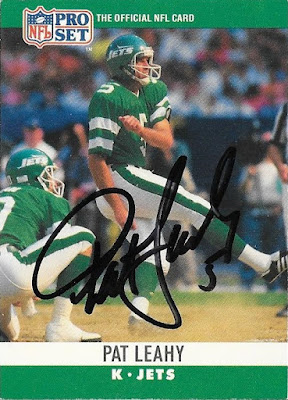 Here's a fun trivia question for you all: Who leads the Jets in points scored over their history? Hint: It's this guy right here, Pat Leahy. It would make sense, considering he was their kicker from 1974 all the way until 1991. Leahy even ranks 22nd among all players in recorded football history in scoring, ranking among many of the league's finest kickers. He signed this 1990 Pro Set nicely in black sharpie, and was one of the final Jets I had to sent to last year that I hadn't gotten back yet. 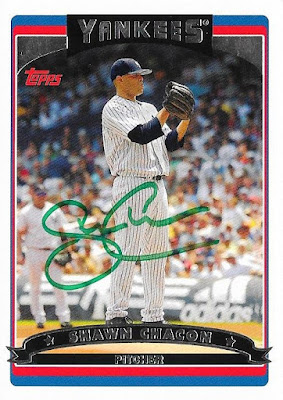 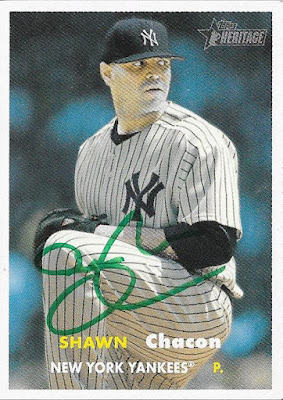 The Lost Collector recently got back from the former journeyman, and I was particularly jealous. Little did I know, I would receive two cards back myself just days later. I remember Chacon fondly for his brief period in New York because I was just getting into baseball around that time. He pitched in a few of the first games I ever went to, and I grew to like him. Unfortunately, just as he was growing on me, he was dealt to Pittsburgh for utility infielder Craig Wilson. Both the 2006 Topps and Topps Heritage were signed in green sharpie, which is certainly a unique touch among my growing autograph collection.

Thank you Clint Frazier, Pat Leahy, and Shawn Chacon for the autographs!
Posted by Drew at 8:12 PM