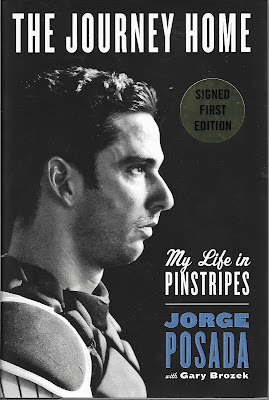 Hey everyone, Drew back here! I have been excited to write this post since I first received my hard copy of Jorge Posada's new autobiography "The Journey Home" last month. I'm not exactly a swift or aggressive reader by any means, so after a few weeks I finally was able to complete the 344 page story of the most unknown member of the "Core Four". I think I've said on several occasions that Posada's status in the "Core Four" tends to rival Ringo Starr's status in the "Fab Four". Even down to the enlarged facial features. Silly jokes aside, I've been excited to check out what Jorge had in store for baseball fans since the moment it was revealed to be released. I didn't know much about Posada's life, and really was interested in learning about the man who was the Bronx's primary backstop throughout all of my early childhood.

Posada begins with an important chronicle of his early years in Puerto Rico, recalling a summer in which his father moved an enormous pile of dirt into his backyard that he requested young Jorge spread across the yard. His father had a noticeable impact in all of Jorge's decisions and his progression into a big league ballplayer and one day All Star. He embarrassed him at games, making him bat left handed until he became fluent at both sides of the plate, and certainly did not go easy on him. "Tough love", as Jorge called it, would become the staple of his childhood, but eventually he learned there was a method to his father's madness.

His dad's goal was to make a ballplayer out of his son, and we all know how that went in the long run. But as the title recognizes, it was the journey that we all wished to know more about. We wanted to know how Jorge came to be best friends with Derek Jeter, how he felt about performance enhancing drug users keeping him from achieving great milestones (such as the 2003 AL MVP, which he succumbed to Alex Rodriguez), and of course, how he felt about his compadre, Pedro Martinez. We got all of that and more as Posada made his march through the Yankees organization and into the big leagues.

One interesting, and quite hilarious tidbit I gathered from Jorge's story, was how he met his now wife, Laura. Apparently, he was too nervous to approach her although he knew he would marry her if he could, and it was Jeter who pushed him to do so. Jeter seemed to have his back throughout all of Jorge's hardships, and it was pleasant hearing that their relationship is far beyond superficial. Also, Joe Torre's supposed position as a mentor and father figure were put to the test when Jorge discussed his challenges with his son Jorge Jr., who battled with cryniosynostosis (a birth defect where joints of the skull close prematurely). Torre lived up to what has been said of him, and was there for support whenever it was needed on their battle to keep Jorge Jr. alive and healthy. It was touching to hear that Jorge Jr. is now a young adult and doing better, and nothing beats the story of Jorge sending him out on the field during the 2003 All Star Game lineup announcements.

The final chapter was particularly controversial among recent headlines, where Posada spoke about his relationship with current Yankee manager Joe Girardi. It was clear from the time he first introduced Girardi in the story during his time backing him up that their relationship was strictly professional. Posada hoped Don Mattingly would have taken the reins after Joe Torre left following the 2007 season, but was not upset when Girardi was first hired. In fact, from Posada's perspective, it sounds like their relationship grew much stronger during Girardi's first few seasons managing. However, things eventually took a tumble when Posada was texted rather than being told first hand what he would be asked to do with the team. I can see where Jorge was coming from, as this was his job after all and I would have even taken a phone call over being texted important news. They grew apart as years passed, and Jorge was no longer asked to join the catcher meetings because he was told not to. He became a semi-permanent DH, and wasn't happy with his demotion considering the blood, sweat, and tears he put into being a Yankee for as long as he had. He did mention his final big moment with the team, when on September 21st, 2011, he pinch hit and knocked in the go ahead run that would win the division for the Yankees. I was at that game, and can easily say it was my favorite moment I shared with #20 in my time as a fan.

My goal in reading this book was to gain a new outlook on our fiery, hard-nosed catcher. Jorge turns out to have just as much of a temper as we saw on the field, and left an almost overwhelming amount of emotion in his words. The only flaw I came across in reading this was how he approached some of the Yankees big moments, but I will give him a pass considering just how many there were in his tenure with the team. If you don't know about what went on during the Yankees dynasty run in the 1990's and some of the crucial moments, the second half of "The Journey Home" may confuse you. But, Jorge was clearly writing to an audience that already somewhat knew him, the Yankee fanbase. Luckily now, we know even more.

Rating: 8/10 - An absolute recommendation for any Yankee fan who hope to gain more insight on Posada's career. The emotion was real from Jorge, and after reading this I now feel satisfied with his career and story. 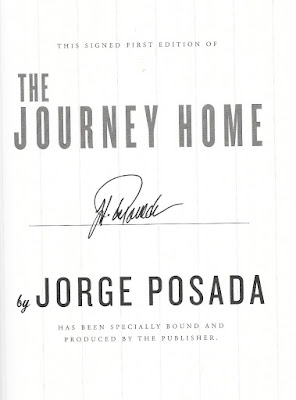 But wait, there's more. My pre-ordered copy from Barnes and Noble was signed by Jorge himself, which was an added bonus! For $20, they sold signed copies of the book for a short period of time, and I was able to pounce on the deal while it was available. Jorge's autograph generally sells for $30+ alone, so I felt like I bought an autograph and his entire life story for an incredible bargain! This now makes my second autograph of his in my collection of hopefully more to come!

Did any of you get a chance to read Jorge's new book? If so, what did you think of it? I can say that I'm now very excited for Jorge Posada Day on August 23rd of this season, and really hope I can get tickets to see his number retired by the Yankee organization.