Not Missing Out This Time

Hey everyone, Drew back here! I've been having a pretty nice, relaxing week away from the world before I get ready to embark on my second year of college. Last night my family scoped out Atlantic City in preparation for when my Dad and I will be attending the National next year. We saw a performance from America's Got Talent participant and hypnotist Wayne Hoffman. I was shocked by his act, and he truly did blow my mind. If he ever comes to a town near you, I would recommend you check it out.

About two weeks ago, I was feeling quite jealous of all my blog friends being at sports collector heaven, and decided to treat myself. Rather than buying more for my PC's, I wanted to take a risk. Hopefully, this risk will have a high reward. 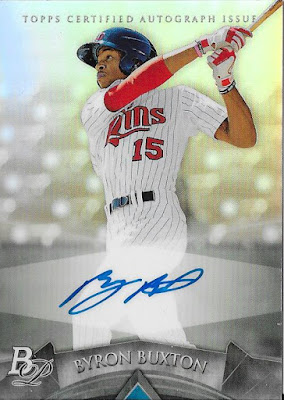 Out of 2014 Bowman Platinum, I added a gorgeous on card autograph of not only the Twins top prospect, but widely regarded as the best prospect in all of baseball, Byron Buxton. Buxton made his MLB debut earlier in 2015 although he clearly wasn't ready to take on the show just yet. At 21 years old, most superstar prospects still have room to grow before reaching their full potential. After all, not everyone is Mike Trout. He has a great swing, and appears to possess five tool talent.

Mike Trout was actually a lot of the reasoning behind this pickup. I remember passing up on cheap Trout autographs on eBay back when he was emerging through the minor leagues, and I didn't want to miss out on this opportunity. Not only could this card rise substantially in value if Buxton does become what he's said to become, but it is one of his nicest cards as well. Bowman really hit the nail on the head with this card, and I'm going to be hard-pressed to move it even if he does well.

What do you all think of Byron Buxton? Is he worthy of being the #1 prospect?