Much Delayed Pickups from COMC!

Hey guys, Drew back here! I haven't had a whole lot coming in over the past few weeks, but I did get this package in a while back that I haven't gotten around to showing off to you all just yet. I ordered some cards off of Check Out My Collectibles after selling a few cards I'd been wanting to move, all of which going towards my new Player Collections box I've been building while I've been away from the blogosphere. Take a look at what I was able to add this go-round: 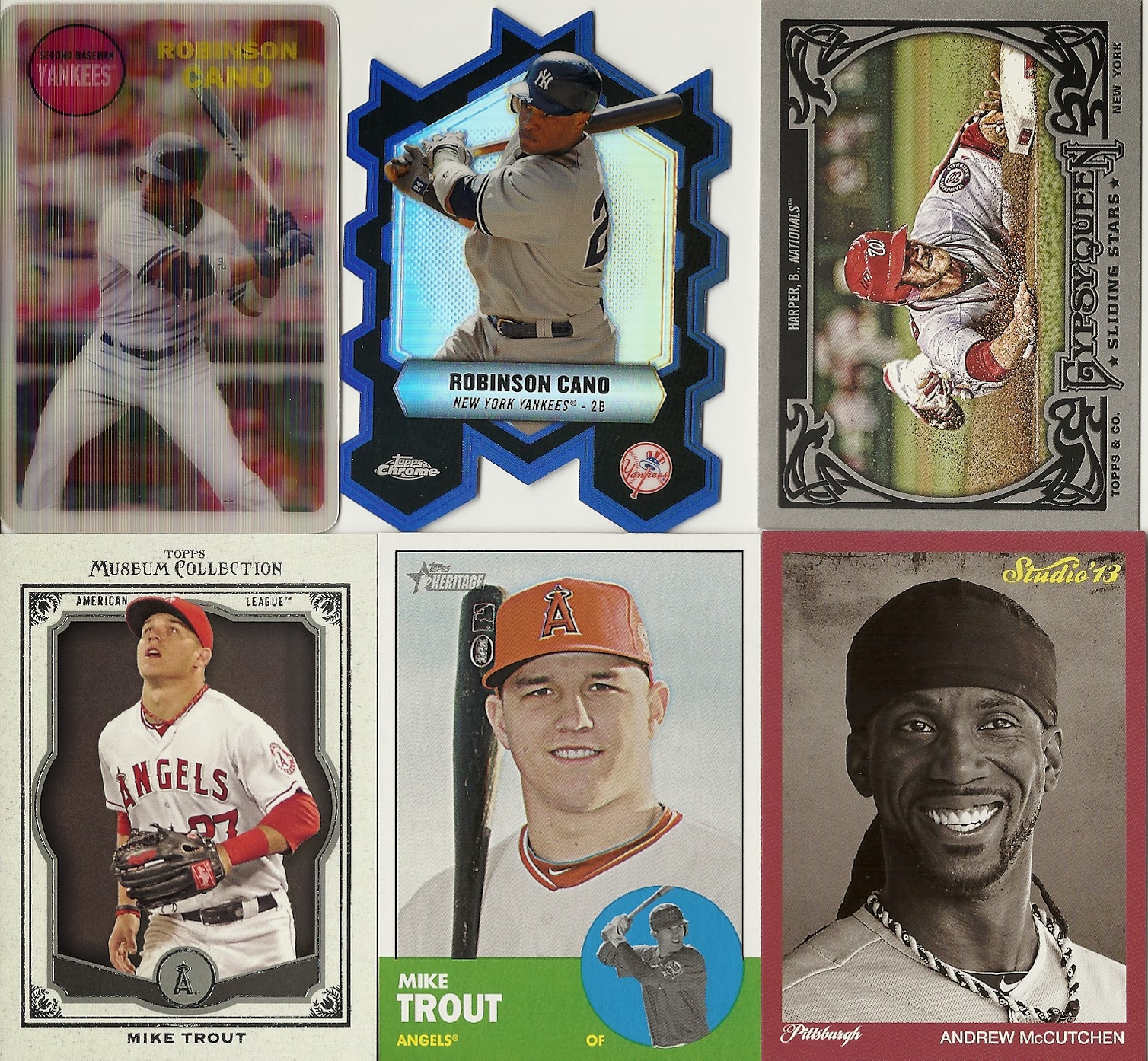 When I first made my list of players I wanted to collect from this point on, I made sure to look young in some cases. Obviously I love a lot of the legends of the game, and a majority of my list consists of those players, but I was also sure to pick a few new favorites such as Mike Trout, Andrew McCutchen, and Bryce Harper. Cutch has been a favorite of mine for a few seasons now while I've been warming up to Trout and Harper along the way. The Home Run Derby I attended last summer definitely made me a bigger Harper fan, because I originally labeled him as cocky and arrogant (kind of like Puig). I love the intensity each of these 3 players bring to the table; they're always willing to go the extra mile and that has allowed them to be as successful as they have been. Also, while Robinson Cano left New York, I still decided to collect his cards because I've been a fan of his from the very beginning of his career and I can't let the business part in baseball get in the way of me rooting for one of my favorite players ever. I don't like seeing him in a Mariners uniform but he is still a favorite of mine, without a doubt! 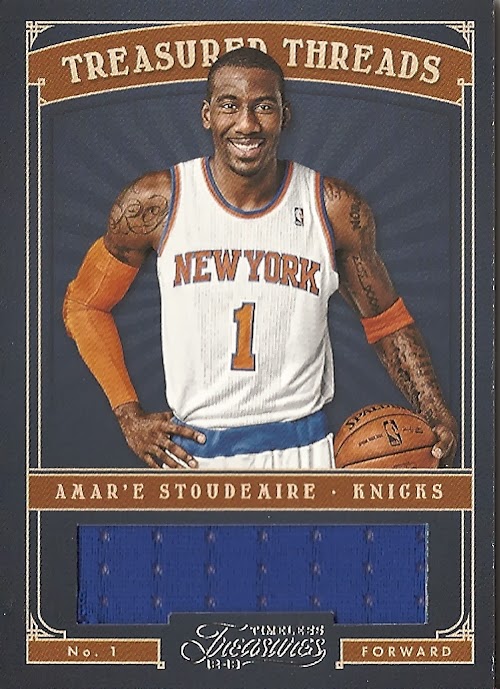 The Knicks suck. I've been so incredibly disappointed with them this season, as I came into the 2013-14 season with high expectations coming off of a very good previous season. Now, I can't even bring myself to watch them, and I think a lot of smart business moves need to be made before I can really take interest in them again. However, I don't see James Dolan making any of those smart moves, so until he's out of the franchise, I don't know if I can get my expectations up again. Amar'e Stoudemire, despite all of his injuries, is still my current favorite Knick, although Carmelo is carrying most of the load. I feel bad for his poor health even though he's making a boatload of money because I see how much he cares about being a part of the team and wanting to contribute. I picked up this relic of his for a few dollars just for the heck of it. It's out of 2012-13 Timeless Treasures and is numbered 76 of 99. 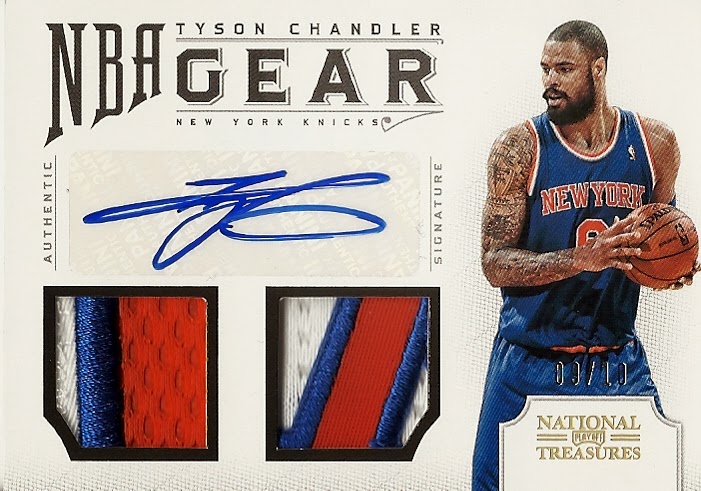 Tyson Chandler is another favorite of mine on the Knicks during this dark period. I love the way he carries the team on defense and he does a great job in his role. Unfortunately he doesn't have much help, as the defense is basically helpless outside of his performance, so with his frequent injuries it leads to many more problems. I picked up this gorgeous dual patch autograph of Chandler's from 2012-13 Panini National Treasures numbered only to 10 for a pretty fair (while expensive) price, but it's absolutely gorgeous and I'm glad to add it to my collection, despite how pathetic the Knicks have played this season. 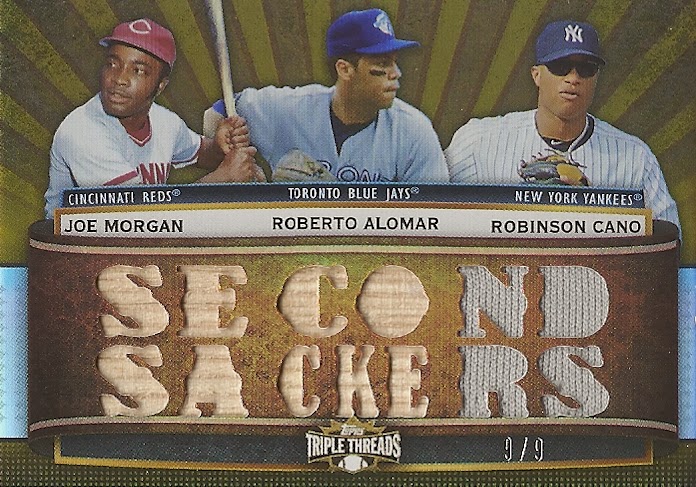 Finally, going back to my Cano tangent, here's a really sweet 2011 Topps Triple Threads relic numbered only to 9 featuring Robby along with Hall of Famer's Joe Morgan and Roberto Alomar! The relics spell out Second Sackers, and while sort of cheesy, the card is still amazing to look at in person and it's really cool to see a personal favorite player of mine stacked up with the all time greats at his trade! I think Cano will ultimately go down as one of the best second basemen of all time (especially offensively, while he more than holds his own defensively as well), and quite possibly a Hall of Famer as well!

So that's all I have for now everyone, hopefully I'll be getting some stuff in soon leading up to perhaps the biggest event I've attended yet coming up next month! Be on the lookout for that, but until then, see ya!
Posted by Drew at 2:03 PM