Hey guys, Drew back here! It's starting to become that time again in which schoolwork begins to take over some of the time I normally would spend on my hobby. However, that doesn't necessarily mean I've been completely out of it, as you'll see over the next few weeks. Take a look at some of the through the mail successes I've received over the past few months! 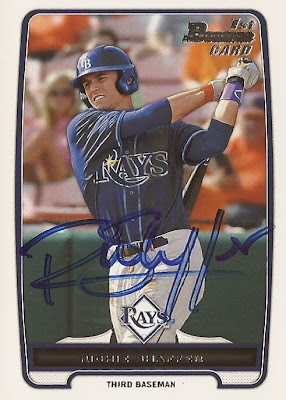 The Rays selected Shaffer with their 1st round pick in 2012, and so far he's played fairly well in his professional career. This year he batted .254 with 11 home runs in 122 games played for High A-Charlotte. I mainly mailed to him because he played for the Hudson Valley Renegades in 2012 and I got to watch him play a few times. He signed a 2012 Bowman and it came out pretty nice! 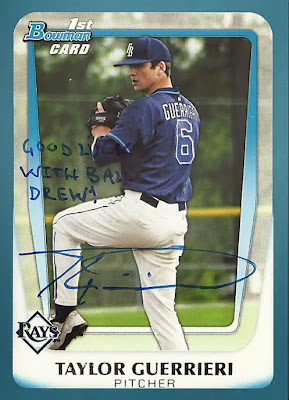 Keeping with the ex-Renegades theme, I next received a signed card from 2011 Bowman by fellow Rays prospect Taylor Guerrieri! He signed my blue parallel numbered out of 499, inscribing it "Good luck with Ball Drew!" It's cool to see a player actually responding to part of what I wrote in my letter! Unfortunately, Taylor underwent Tommy John Surgery this summer, so he'll miss most of next season. However, prior to the surgery he was ranked as one of the Rays best prospects, so hopefully he'll come back strong! 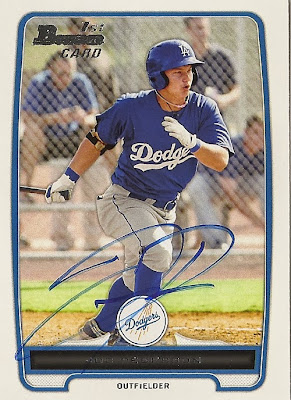 The worst part about being Dodgers top prospect Joc Pederson right now is that there simply isn't a spot for him on the roster! He's spent a few years in their farm system since he was drafted in the 2010 draft, but all that time has served him well. In 2013, he batted .277 with 22 home runs and 58 RBI, along with 31 steals! The kid has a lot of potential, and hopefully he'll get a chance to show it off in the majors in the next year or two! In the meantime, he signed a 2012 Bowman for my collection! 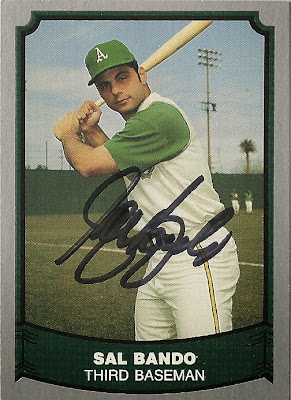 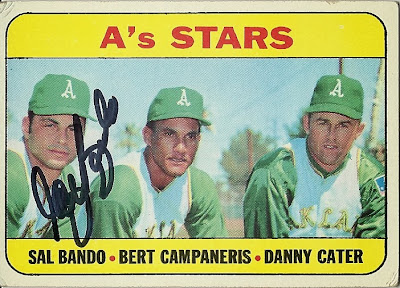 As we now travel from the future back to the past, former Oakland A and 3 time World Series champion Sal Bando signed 2 cards for me! Bando was more known for his postseason heroics, but he had a very solid career to go along with them. He made 4 All Star teams and hit 242 home runs throughout his 16 years in the big leagues. He signed a 1988 Pacific to go towards my growing collection of autographed cards from that set, along with a 1969 Topps card that I hope to have signed by Cater and Campaneris at some point as well. 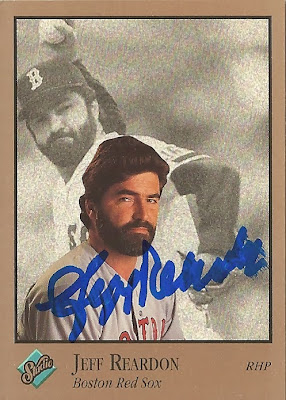 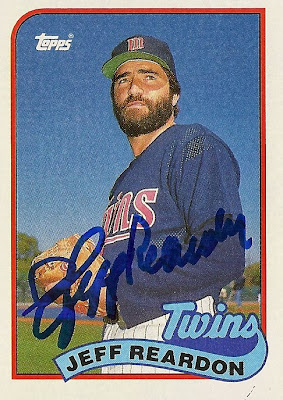 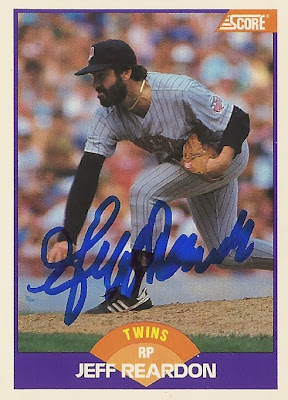 Jeff Reardon is one of the more underrated closers in history, and for that reason I knew he would be a solid TTM request! Not only was Reardon a 4 time All Star, but he also finished with 367 saves, which currently has him ranked 7th all time! In 1992, Reardon became MLB's All Time Saves leader, only to eventually be passed by Lee Smith the next season. He signed 3 cards for my collection which all turned out great! 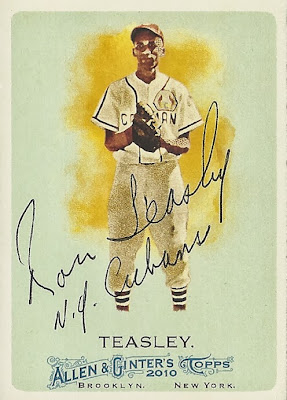 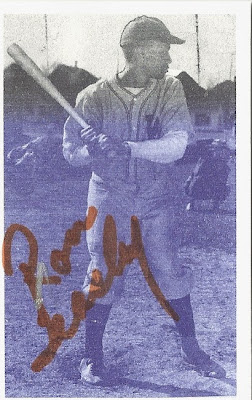 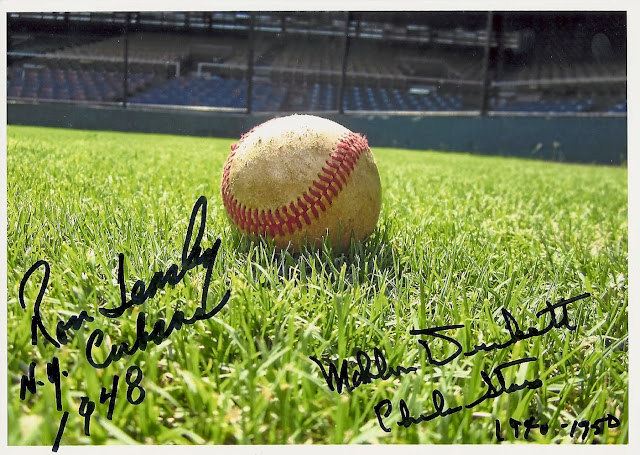 The next player to receive my Negro League TTM project was former New York Cuban Ron Teasley! Teasley played just one season of pro baseball, but also spent some time in the Brooklyn Dodgers organization! He signed my picture nicely, inscribing "NY Cubans 1948 and joining Mahlon Duckett! He also signed a 2010 Allen & Ginter and generously threw in a small signed printed photo. 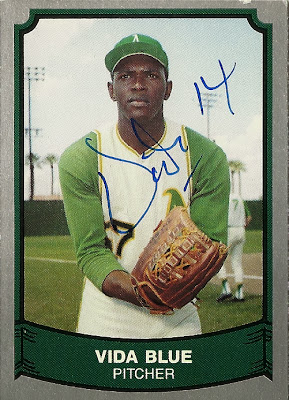 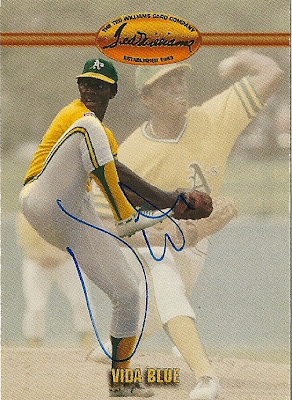 Before I complain, let me say that I believe Vida Blue is one of the most underrated pitchers in baseball history. He was one of the hardest throwing left handed pitchers ever, and although his career was marked with ups and downs, his "ups" can rank with just about any pitcher in baseball history (example: 1971- 24-8 W/L, 1.82 ERA, 301 K's)! I was ecstatic to see these come back in the mail, but a little confused once I saw the autographs. Being a self proclaimed autograph expert, I knew that Vida never signs with just his first name. Every autograph I've seen of his has included his full name, and I did send him $5 for the autographs. I'm a little confused by this still, and I'm not sure of the legitimacy of the autographs, but there's really nothing I can do at this point. 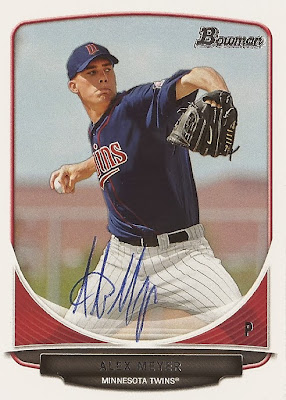 Meyer went into the 2013 season as the Twins top pitching prospect, and despite a trip on the disabled list, he lived up to those expectations. He was traded to Minnesota as the big piece in the return package for Denard Span, and it appears that the trade has a good chance to work in Minnesota's favor! He signed my 2013 Bowman card for me in ballpoint pen but I'm not upset about it at all since it still looks great! 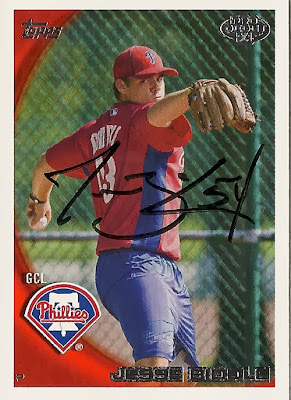 That same day, I also received my card back signed from Phillies prospect Jesse Biddle! Biddle was highly touted as well going into 2013, but seemed to regress more than the Phillies would have liked thanks to some control issues. He still managed to have a 3.64 ERA, but even that isn't all that impressive. However, he has all of the tools to come back strong and make a run at the big leagues, and I'll be rooting for him all the way there! 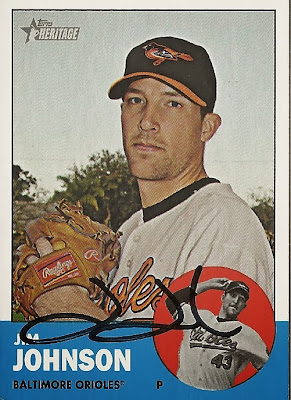 Lastly (for now), I just got this sweet Heritage card back from Orioles closer Jim Johnson! Johnson made the All Star team in 2012 and went on to lead the league in saves, but he ended up taking a slight step back in 2013. Either way, he's now saved over 50 games in back to back seasons, which seems to be getting more and more difficult to do.

I want to thank all of the preceding players for signing all that I had sent out! There is one more success I did not show here that will eventually receive its own post, and I ended up getting a RTS from Greg Luzinski via his Bonita Springs address. On that note, be on the lookout for an upcoming card show recap among a few other things!