Hey guys, Drew back here! It was a great day today, as we got to leave school early due to a few inches of snow! I spent most of my afternoon indulging in my latest book for English, "One Flew Over the Cuckoo's Nest", however I found a little spare time to finally update the design of the blog, and well, write this post! Before I get to it all though, I want to say rest in peace to my dear old blog logo, as it is no longer present on the site. I went with the new Blogger template, and I'm yet to see if it'll actually keep the same template without automatically changing like last time. Let me know if you like what you see with the new layout!

As I may have warned you all a few times, there have been a few big posts planned. Yesterday, I showed you all my experiences with Harold Baines and Sparky Lyle, and I hinted towards two more big names that would each deserve their own respective post. Ladies and gentlemen, I met the Iron Man, Cal Ripken Jr.!

Ripken made his first appearance in White Plains last weekend, and was regarded as "the guy" for the entire show! When he was first announced, I wasn't exactly sure how excited I was, because his price point was, well; ridiculous. However, I ended up deciding that no matter how high the price was, since Christmas helped me fund more towards my show budget; that I would go in and do it. I mean, come on, the guy has an entire baseball LEAGUE in his honor, how could I resist the opportunity to shake his hand?

The first thing I noticed about Mr. Ripken was that he wouldn't be somebody I'd want to mess with. He's listed at 6'3; and definitely appeared to be every bit of that! I'm not sure if it was just that I've always overlooked his height, or if his larger than life persona just made me picture him to be bigger than he actually was on stage that day! He brought his own company representation with him for the signing, which was so refreshing considering that many of the JP's sports workers get very grouchy and aggravating. These people handled us fantastically, even holding our spot in line for us when we realized time was running out for one of the other signers we had an autograph ticket for! They all cracked jokes and were really personable, which set Dad, Schuyler and I up really well for "the moment". 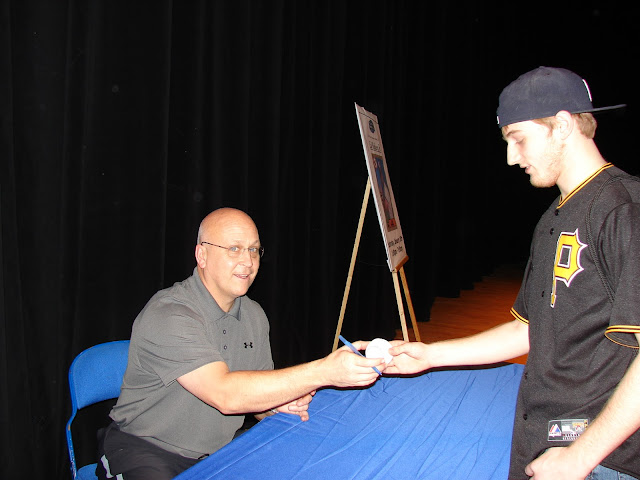 That moment eventually came, and there he sat directly in front of me. I opted for him to sign a baseball, as a custom card just wouldn't have been logical for the price I paid. I, of course; was thrown offguard by the fact that a baseball legend was signing my baseball, however; Dad told Ripken how much he enjoyed his career and told him that he'd never forget the game he passed Lou Gehrig for most consecutive games played. Ripken (who's heard that same script too many times to count I'm sure) thanked him, and that was about it. In reference to the picture above, Ripken held still and told me it'll be a cool action shot!

But, that wasn't all. After every set of 5 or so people got their items signed, they received a photo opportunity with Cal! They threw all of us in "The Bullpen", where we waited to be called back up and get our pictures taken. The representatives again handled everything well, allowing us to take two pictures instead of the one we were originally allowed. "I'll retake it once for you if needed, or twice even, but if I have to retake it a third time it's not the camera, trust me," said one of the guys.

Ripken got up, posed for a few pictures; telling everyone that we're his friends. We stepped up as a group eventually, got our photo ops in, and just when we were leaving I shook his hand again, thanking him, and Dad told him along with his representatives that they did a great job with the experience. Ripken's response: "Thank you! I'll be here until midnight." 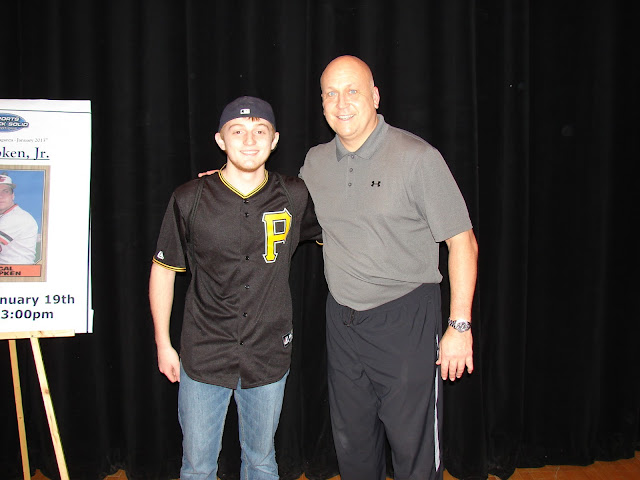 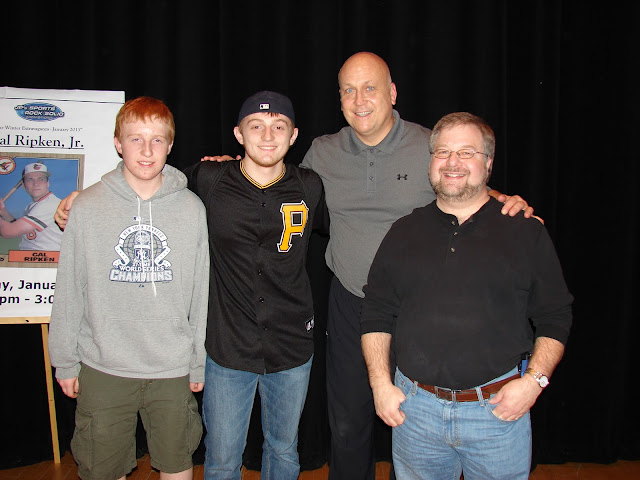 The other day, I reflected on the whole thing, and I could see why Cal is revered throughout professional sports. He's a class act, he did everything in his career in the most respectful way possible, and he's one of the best true players during the Steroid Era. If I grew up 15 years earlier than I did, I have no doubt in my mind that Cal would be one of my favorite players, because he seems so similar to my favorite player, Derek Jeter! I still can't believe I got the chance to meet him, and I'm glad I saved up my money in order to do so! 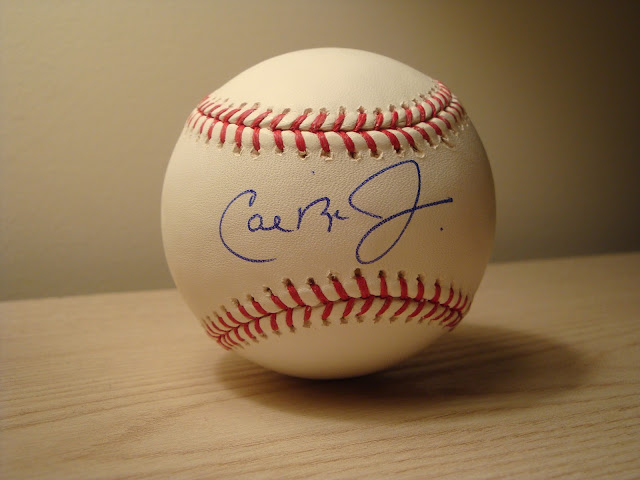 Oh, and by the way, the baseball came out beautiful! I got it certified for the discounted price over at JSA immediately following the signing, and it officially has become a staple in my memorabilia collection. This makes my 3rd Ripken autograph; I have him also on a card with his brother as well, and on his recent children's book "Hothead" (which I enjoyed reading)!

Overall, this was a phenomenal experience, and even though I was quiet, I don't think I'll ever forget it! Thank you to Cal and his company for really making my day! You guys will always be friends of mine!