Hey guys, Drew back here! I have two more things to share with you guys in order to properly wrap up my card show review, and well, they both deserve their own individual post! I decided to save the best of them all, in my opinion, for last, but this one ain't too shabby either. Take a look: 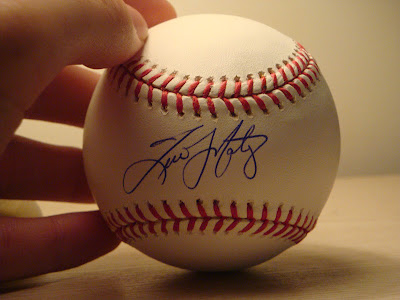 Why if it isn't an autographed baseball of Tino Martinez! As a lot of you may know, Dad and I have lucked out to the max with the door prize giveaways at the JP's Sports shows. Our strategy works quite often, and we've been able to win autographed items of many great athletes such as Don Larsen, Robinson Cano, Tom Seaver, and that huge signed photo with over 30 Yankees signatures! The luck kept going at this show, as I was the second name drawn for this prize, after the first name wasn't there to claim it.

Tino is one of a few Yankees greats that I really don't have a whole lot of in my collection. This is my first autograph of his, and I'm glad I got it for free because normally his ink sells for quite a bit, just because he doesn't sign that often. He's easily one of the biggest class act players of the late 90's Yankees dynasty, and his career wasn't too bad either. Over 300 Home Runs, 2 All Star Selections, and a plethora of clutch hits during one of the best time frames in Yankee history has earned him one of the biggest hands year after year at the Old Timers Games. While Cooperstown may not be in his future, baseball fans won't forget some of the moments he made during his career. And it's awesome to now be able to have his autograph.