Autograph Pickup of an All Star Flamethrower!

Hey guys, Drew back here! So first and foremost, it looks like some of you have enjoyed doing the contest thus far, which is great! I sure hope we can get the word around even more though guys, so please don't stop with what you're doing, because 10 entries really isn't anything spectacular, especially for prizes of this caliber. Someone out there wants a 1/1 cut autograph of a Hall of Famer, right? You can do this! I'm rooting for you!

Anyways, to kick off the next 1,000 posts here on drewscards, let's start it off with an autograph of a guy whose young career will probably just be getting incredible by the time I get to #2000! Take a look: 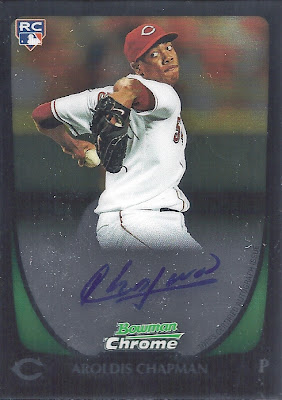 My apologies for the horrible scanning job, but this right here is a 2011 Bowman Chrome rookie autograph of Reds gunslinger Aroldis Chapman! Chapman has made a ton of waves in the MLB in his first few seasons due to being notorious for clocking well over 100 mph on his fastball. He set the record for fastest pitch in a game with a 106 mph fastball blazing inside to Andrew McCutchen, who could hardly even see the ball. However, he's also a very talented young pitcher with a load of potential for the Reds. He's posted a 1.93 ERA and 9 saves as the fill in closer, due to an injury to Ryan Madson in the beginning of the year. Of late, he's blown quite a few saves, but there is no concern that he won't bounce back.
I paid about $15 for the card, and I'm hoping it was a fairly reasonable buy down the road. No matter what, it is kind of cool to own an autograph of the hardest throwing pitcher in history, even though the card is as dull as anything I've ever seen before. Note to all of you out there, if you're going to get any of these, at least pay $5-10 extra for the refractor. You're better off.
So that'll do it for today, I've got a game tonight and when I come back I want to see some new guys getting in on the contest! The link will be posted right above this post, or you can just keep scrolling to the post directly below this! Let's Go!
See Ya!
Posted by Drew at 3:34 PM