Hey everyone, Drew back here. This summer has not been even close to what I thought it would be for me in terms of the hobby. I haven't gotten a chance or wanted to write any through the mails (thanks damage), I have barely made any trades, but one thing I have done is learn how to spend money. Here's my most recent acquisition off of eBay, this being of a fan favorite in New York, a great leader, and a perfect pitcher: 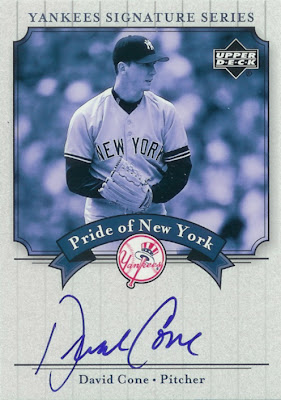 Out of the 2003 Upper Deck Yankee Signature Series product, a set released for the 100th anniversary of the most successful baseball team in history, this is a hard signed David Cone autograph! Cone was truly a great for both the Mets and Yankees, pitching for either of the teams in 13 of his 17 big league seasons. He won 194 games, including several very clutch games in the postseason. I was a little late to catch Cone, as he retired the year before I started following baseball, but he seemed like a major leader for the Yankees team, who was counted on to say all the right things in press conferences and speak for the team.
His most famous moment came on July 18th, 1999, on a typical Yankee miracle day, in which they honored Don Larsen and Yogi Berra for Larsen's perfect game in the World Series back in 1956. Berra caught the 1st pitch from Larsen and passed his glove to Joe Girardi, who preceded by catching Cone's perfect game. I've watched the game before, and it was so cool, and like Yogi says "deja vu all over again"!
I really like the looks of this card, and I'm glad I'm able to add him to my collection! See Ya!
Posted by Drew at 9:19 PM