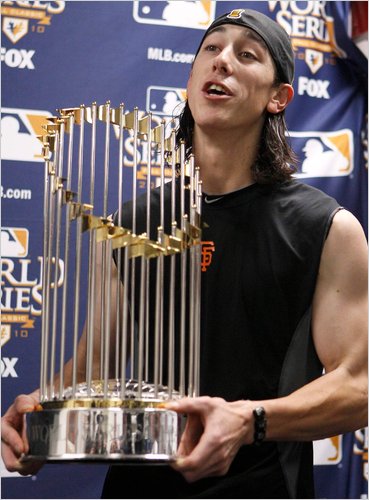 Hey guys, Drew back here. Before it got too late, I want to congratulate the 2010 San Francisco Giants on winning the World Series last night. I rooted for them to win, for a few reasons. One, I don't like seeing the team that beat my team win, no matter who it is. I'm a big fan of Josh Hamilton, and Vladimir Guerrero, but again they beat my Yankees so they can go lose. Second, I've always liked Tim Lincecum, Matt Cain, and Buster Posey, so I was glad to see them win so early in their careers. And lastly, they haven't won in forever so it was about time.

That's pretty much all I have to say. Renteria was very clutch, from the one game I got to actually watch on TV. The FOX thing really screwed up my World Series, but at least I got to watch Timmy dominate.