Hey everyone! I know, you're probably shocked that I've posted three days in a row. And you probably also think that in a week I won't post again for another three months. If so, I totally get that, and there's definitely a likelihood that will be the case. For now, we're going to let the good times roll.

In order to properly put a bow on the Bronx Baseball Bonanza show I went to last Saturday, I have to show off my other new prize. At the show, my vendor friend Joe I mentioned in yesterday's post was really helpful with some non-hobby related ventures of mine, and my Dad and I thought it would be best to buy something from him as a "thank you". And now that you're caught up, voila... 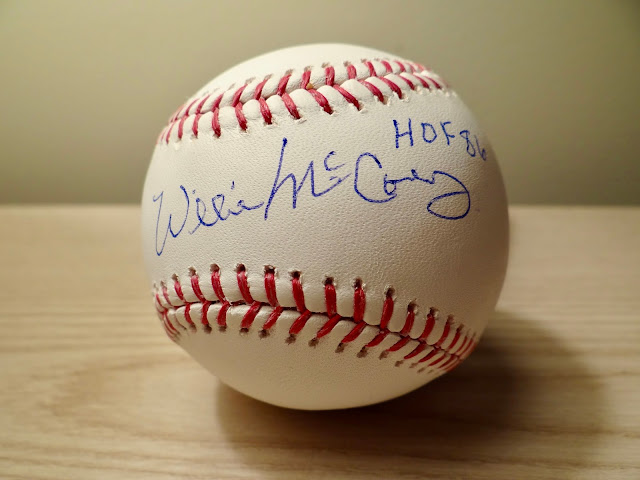 My 24th Hall of Fame signed baseball is of Willie McCovey! This ball is in mint condition, and is certified by Steiner. When compared to the other McCovey balls he had, I felt as though this was the one to have because it appears that the signature had the best chance of lasting long-term. It wasn't cheap, but it was worth it. I've been wanting a ball of the Giants slugger for some time now, and have come to the conclusion that I probably won't ever get to meet him considering his declining health.

Ultimately, I think a big reason I don't often go after Hall of Fame signed baseballs is because I plan to try to meet as many of them as possible. But when I know the chances are slim, I'm more likely to pounce on one. Dad paid for a majority of the ball, so thank you so much for the great gift. This one is already in my Hall of Fame baseball display, and will stay there for the foreseeable future.

Alright, I'll talk to you guys tomorrow (hopefully)!
Posted by Drew at 11:00 AM