Hey everyone, Drew back here. Alright, so maybe the comeback was a little bit of a tease. What more could you have expected from perhaps the most consistently inconsistent blogger in the community?

Anyway, I'm going to at least shoot for one post a week, and this week I'm going to start catching up on some of the mail I've received from some of my friends. We begin with a Christmas gift I received from Andrew, of the now pretty much extinct Everyday Holliday blog. Andrew is finishing up high school now and; while he's still involved heavily through his Instagram (@everyday_holliday7), he's seemed to move away from the blogs. If he ever does make his way back here like I did, he would most certainly be welcomed back. 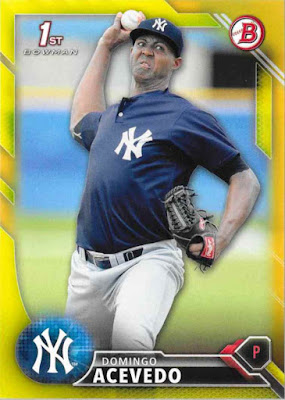 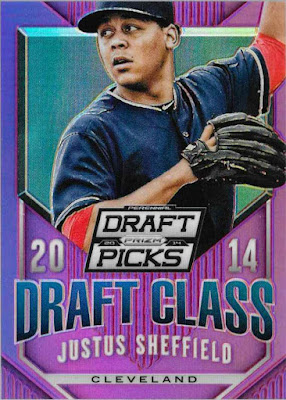 His package contained a bunch of various odds and ends I really didn't expect. To begin, here were a couple really nice parallels of some of the Yankees high end pitching prospects.

Domingo Acevedo put together a strong 2016 season and fits the mold of "tall Yankees right hander who throws gas" (a la Dellin Betances). It will be interesting to see if he can string together another excellent year; because if it weren't for the year Chance Adams had (not to mention all the new young acquisitions), he would be all the talk.

Speaking of which, Justus Sheffield was acquired from the Indians last July in the Andrew Miller deal. The lefty found success in his brief stint for the Yankees following the trade, and projects as our second best pitching prospect behind James Kaprielian. 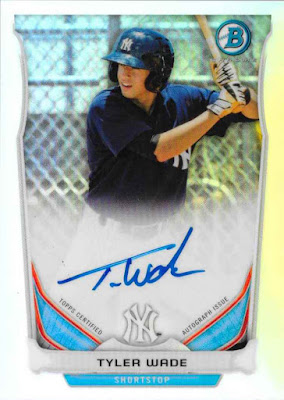 Tyler Wade is going to have to work really hard if he wants to play for the Yankees going forward. Wade does a lot of things well, but nothing exceptionally. He currently ranks as our tenth best prospect according to River Ave Blues, but with Didi Gregorius, Gleyber Torres, and Jorge Mateo also listed under shortstop on the organizational depth chart, he may need to find a new position. Last fall, he tried playing outfield in the Arizona Fall League, which could open up an opportunity for him to supplant Ronald Torreyes or Rob Refsnyder as the utility man in the long run.

Wade was certainly one of the top Yankees prospects I needed a refractor autograph of for my collection, and Andrew was able to knock him off my list as my main gift. However, he went overboard and spoiled me with some other stuff... 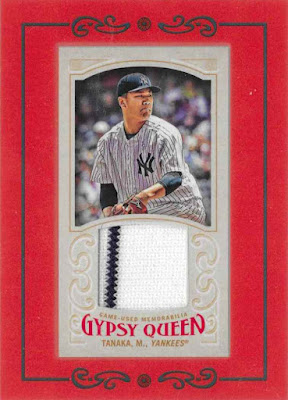 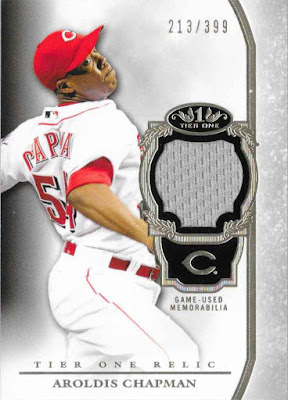 Ah, arguably the Yankees two best pitchers, Masahiro Tanaka and Aroldis Chapman. You can definitely add Dellin Betances in this upper tier, but after that there are endless questions about the rest of the pitching staff. Can Michael Pineda be a little consistent? Can CC Sabathia repeat his bounceback year? And most importantly, is Luis Severino more of the 2015 or 2016 version? These questions are paramount to the team's success this year and to the future teams.

I absolutely love the Gypsy Queen relic of Tanaka. The card design just works for me. Also, the Chapman relic is an instance where a gray relic actually looks good aesthetically! 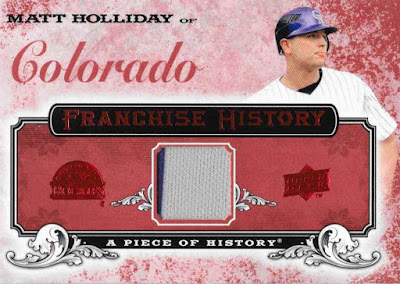 Wait, wait, wait. Hold up. Why are there Matt Holliday cards in a package from "Everyday Holliday"? Well, Andrew is a Cardinals fan and had two PC's: Matt Holliday and Aroldis Chapman. And as of now, both of those players are now on the Yankees roster, which is not exactly something he was envisioning. So, he's decided to cut bait with some of the lower end cards of those collections (hence the Chapman above, as well as the next few Holliday's).

2008 Upper Deck A Piece of History was one of the first products I really got into when I took the next step in my early collecting years. Holliday was a heck of a player in his Rockies days. 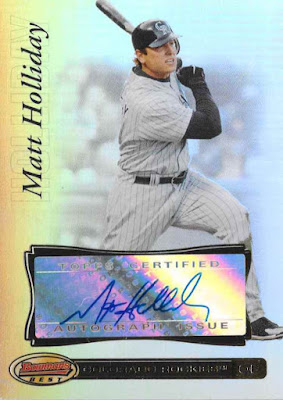 In a deal Andrew and I made early last summer, I sent him a parallel of this autograph from 2007 Bowman's Best. Now, I've got the base version of that card back in my collection. In 2007, Holliday batted .340 with 36 home runs and 137 RBI's. If he can do half of that pinstripes, I'd be satisfied. 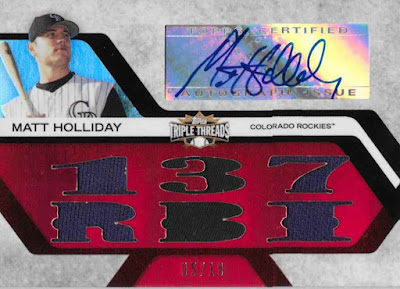 I actually knew I was getting this card, because I bought it off of him before he mailed out my Christmas gift. I really am not a fan of sticker autographs at this point, but most of Holliday's affordable autographs are on sticker. He really doesn't sign much, actually. I love this card from 2008 Topps Triple Threads, one of the first high end products I remember watching box breaks for. This one is numbered 5/18. 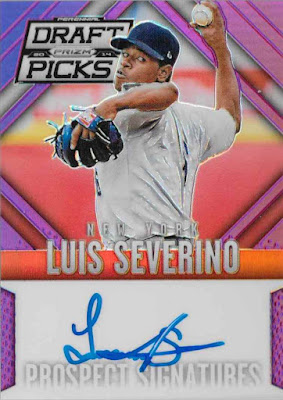 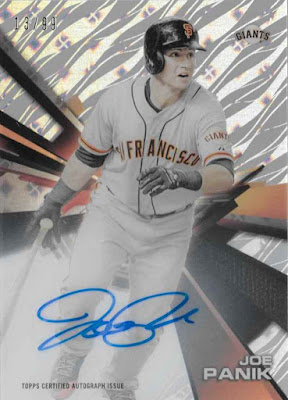 Lastly, Andrew threw in an autograph of the aforementioned Severino and a really nice Joe Panik out of Topps High Tek numbered to 99. I probably am of the minority when it comes to Topps High Tek: I'm not really much of a fan in most cases. I think the clear acetate style cards are sort of a gimmick, and my opinion varies from a card to card basis. I won't even try to figure out what version the Panik is, but it is a good looking card and I appreciate the kind gesture!

Andrew is a heck of a good dude, and I think more people need to know that. If you have an Instagram, be sure to check out his if you haven't already. Thanks for the awesome stuff!
Posted by Drew at 2:14 PM