Hey guys, Drew back here. We now continue with the Pinstripe Pandemonium recap, today featuring a Yankees great in the late 1990's. He played 7 full years in the Bronx, averaging great home run and RBI totals while manning 1st base, initially replacing Don Mattingly at the position. He was a starter on all 4 World Series winning teams in the '90's, and was a prominent role in each of the four. Ladies and gentleman, Tino Martinez! 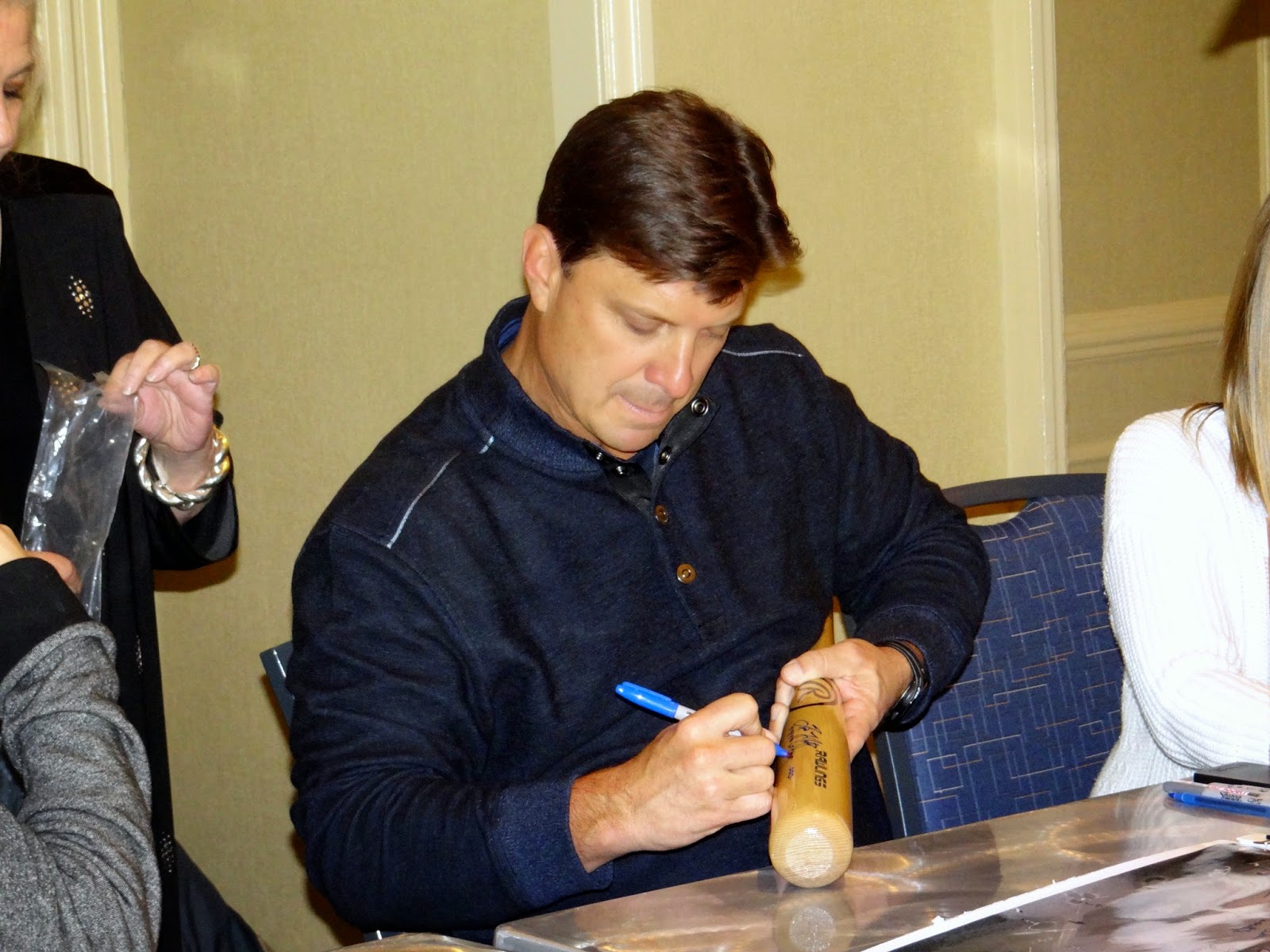 Tino easily impressed me the most among the players I met that day. His charisma and charm could be felt across the room, and you could tell he loves being recognized as a fan favorite on such a classic dynasty team. Just before he entered the signing "stage", I caught him walking in and said "Hey Tino!" He said "Hi, nice to meet you," and shook my hand. Also, the couple before us in line brought their baby up to him, and he posed for photos with it and was really sweet towards it. It was a nice moment to watch, without question. 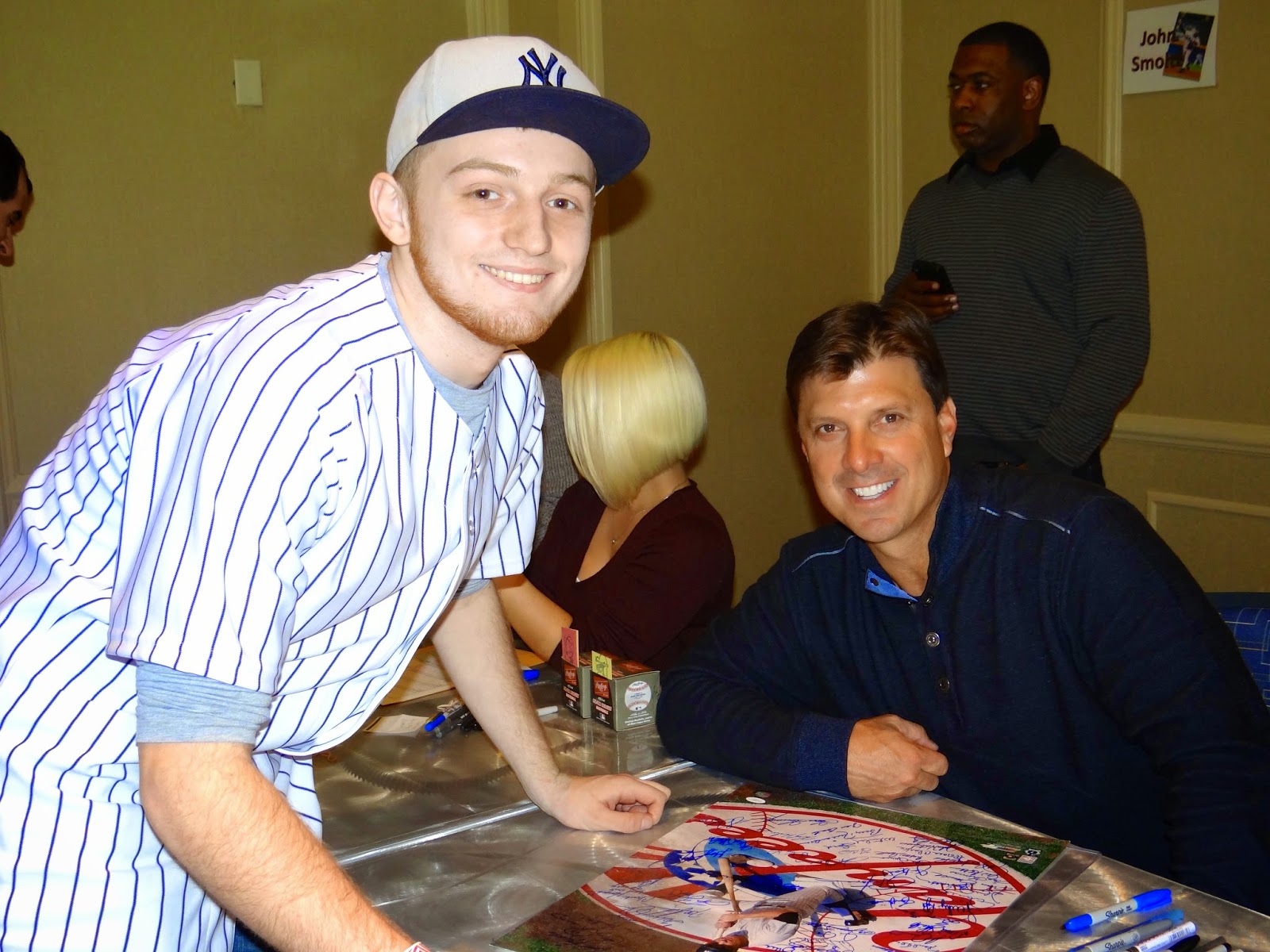 When we got up to meet him, I shook his hand and said thank you for all the memories. My dad remembers watching him fondly and loved getting the chance to talk him up and make him feel great. Tino, after signing my photo, asked me if I had Mickey Mantle's autograph on my picture. I told him that I don't but wished I did, and he said oh well, but the picture is so nice, and I thanked him for the compliment. He was really kind hearted from what I could tell, and it makes me believe that those rumors about him causing issues in the Marlins clubhouse weren't as true as some have proclaimed. I was worried that I would end up spending all this money but wind up with no pictures with the players, but it turned out that every player I met allowed pictures. MAB introduced professional photo op costs for every player on the lineup, and I think they would've cracked down on more people had the show not been as hectic as it was, with players coming and going by the minute. I really lucked out though, and I love how this picture came out with Tino! 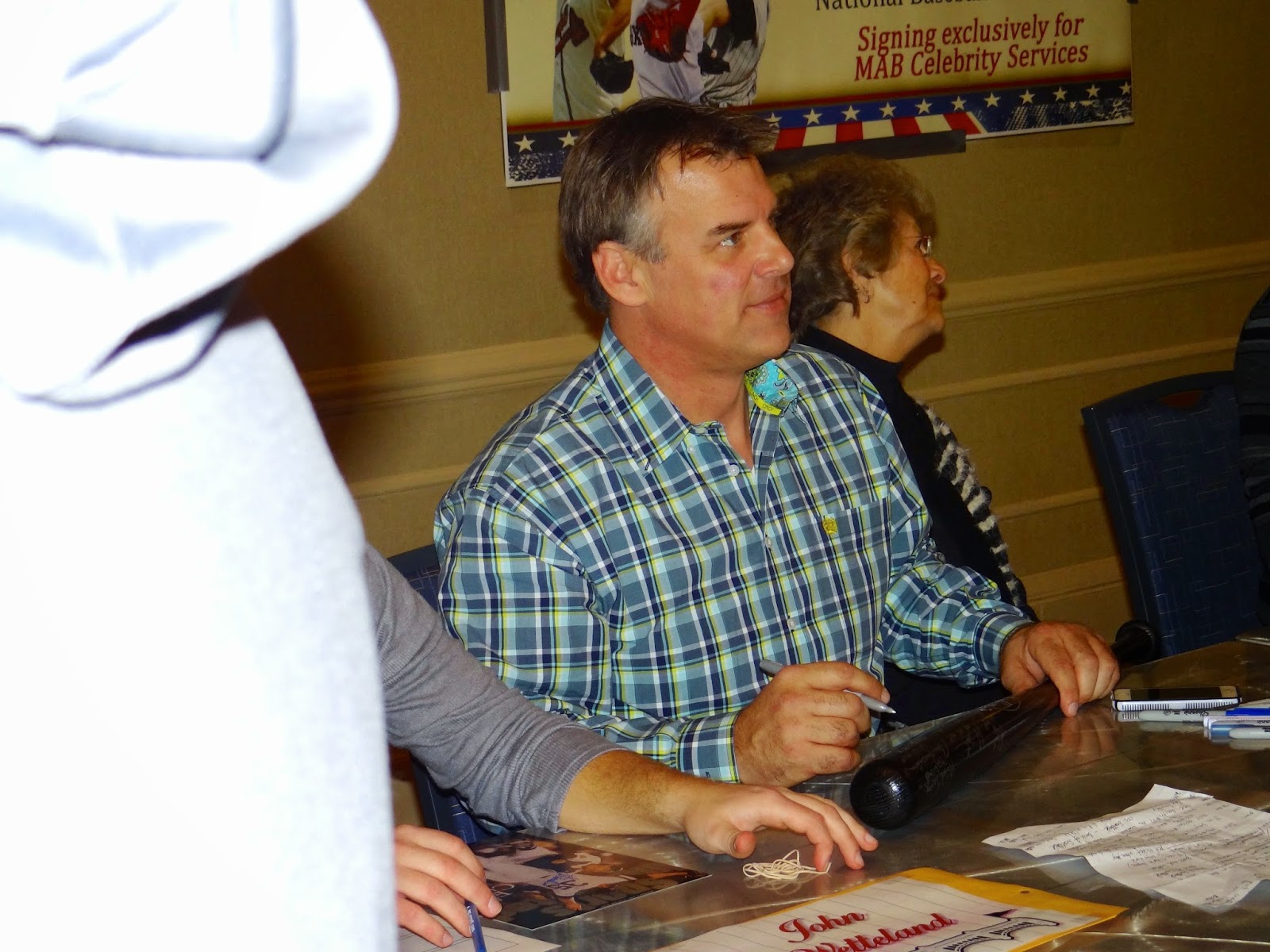 At the time Tino was signing, several other great players were also available, including former closer John Wetteland. He seemed to make a great impression on everyone, and even posed for a picture outside of the autograph room with my dad later on in the day. I wish I could've added him to my picture too, but didn't think there was enough room for him to sign. 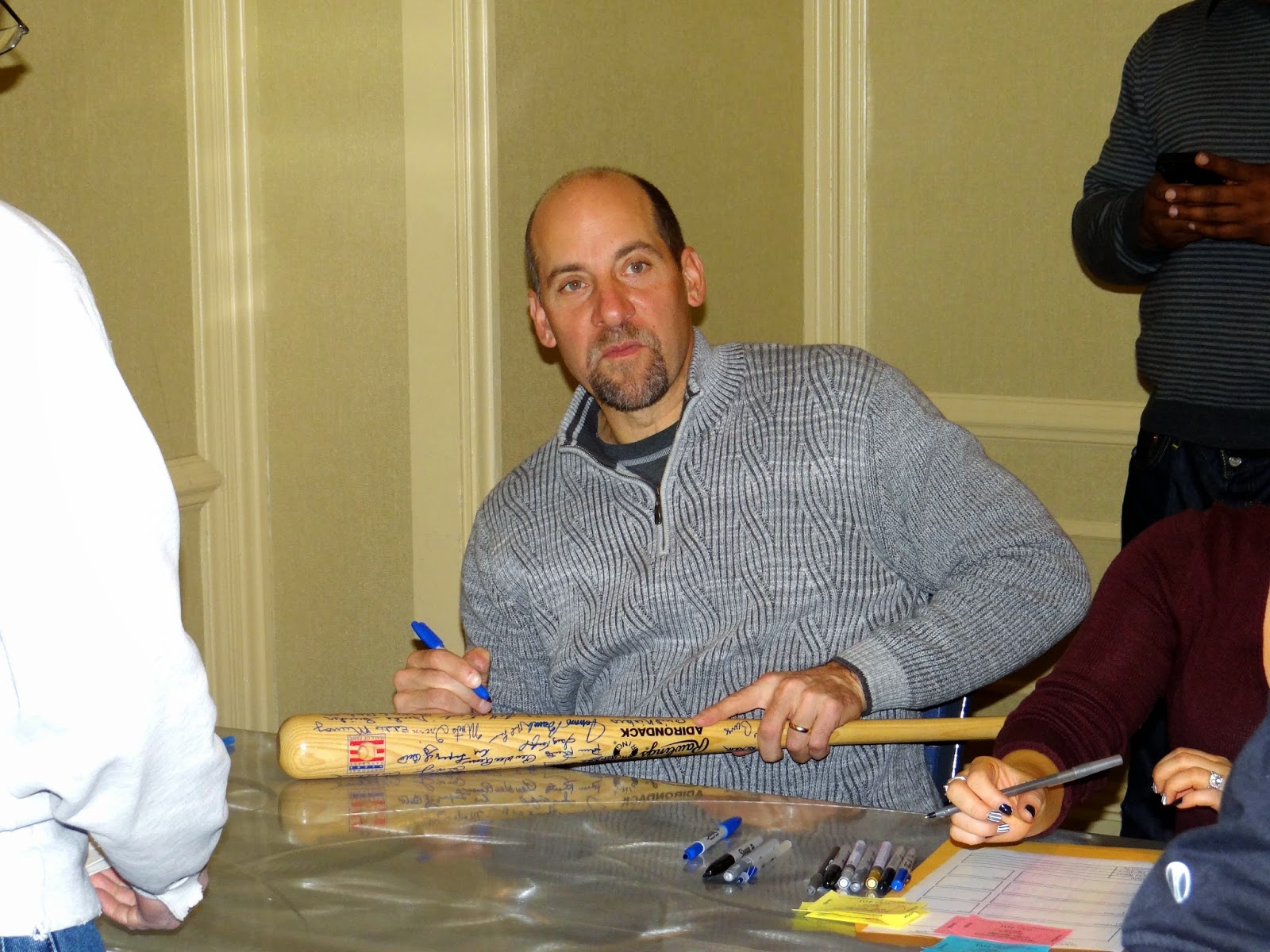 You may think you're seeing things, but yes, John Smoltz was indeed a signer at the Pinstripe Pandemonium show. Shortly after Smoltz, Randy, and Pedro were inducted into the Hall of Fame earlier this month, MAB locked up Smoltz to a contract. They used his recent induction to their advantage, and had him appear at this show. Some people I talked to said they didn't both with him yet because his price is far too high compared to other players of his type. I actually paid $50 less to meet him in White Plains a few years ago, so I could definitely vouch for that statement. Either way, high price or low price, we all yelled out Congratulations to John as he entered the room, and it was a pretty cool moment. May be pricy now, but still a very nice guy and it was nice to see him. 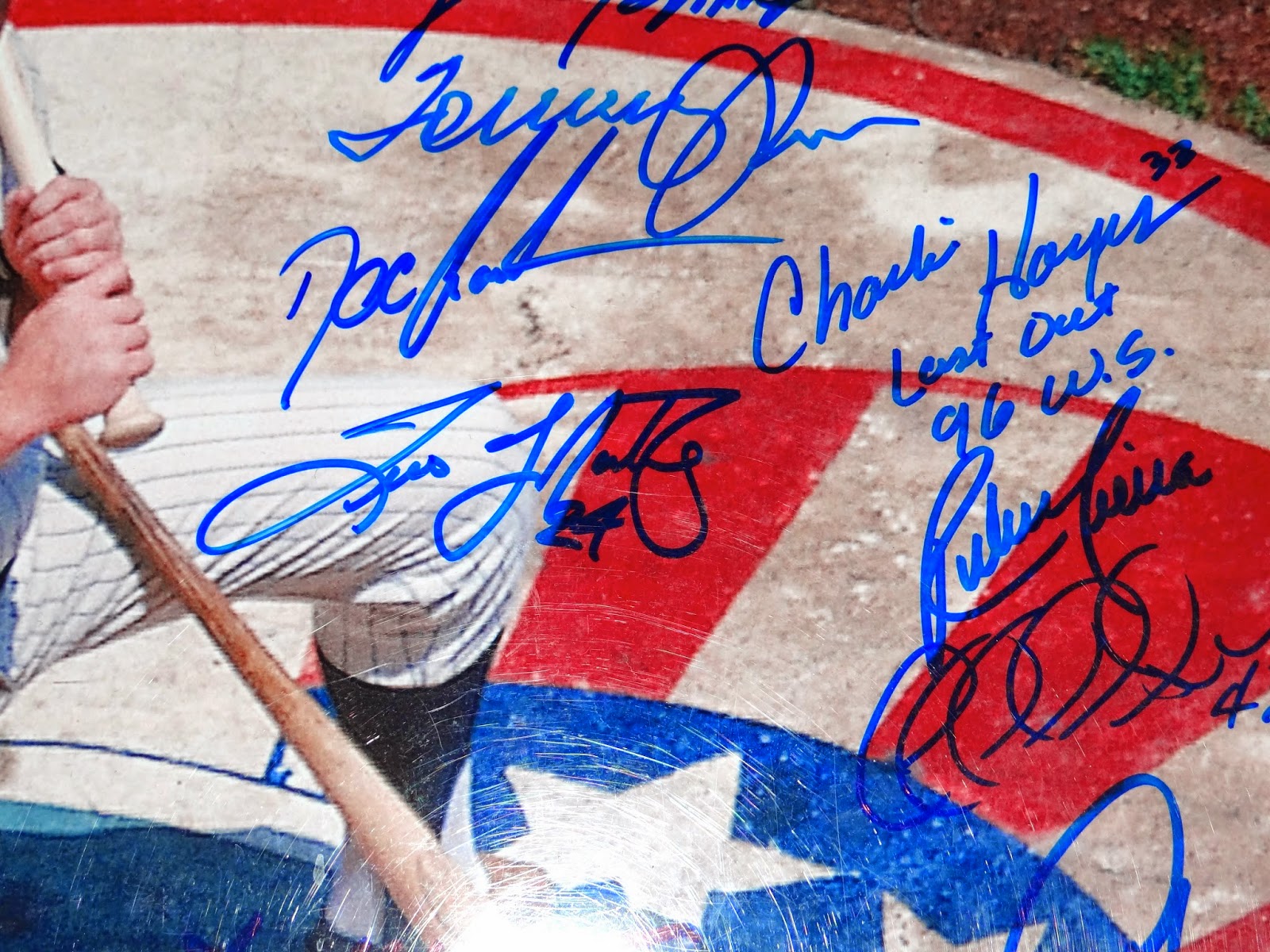 Oh, right, back to Tino. Just before I came up to him I changed my mind on the dead set position I originally wanted him to sign, and had him sign alongside some of the others from his era: Doc Gooden, Charlie Hayes, Ruben Sierra, and Jeff Nelson. I thought it would be a nice spot for his signature towards the end of Mantles left thigh, and I believe I was right! He has a gorgeous signature, and with the number inscription to beat, you really couldn't top what he did for my Dad and I. With this he became the 55th player to sign my picture.

Thank you so much Tino for such an enjoyable day. I never realized how much of a class act he is, and I hope to get the chance to see him back in baseball, forgiven by all down the road. It isn't fair that he was exposed that way in front of a really lazy, bad Marlins team, and I hope the story didn't change people's opinions on the man. Who knows, maybe this one can help reverse those opinions.