Hey guys, Drew back here! Since we're approaching one month since this last card show took place, it's probably best to get the show on the road! I met 3 other former players the day I shook Johnny Damon's hand, and one celebrity I didn't expect to come across! Check it out: 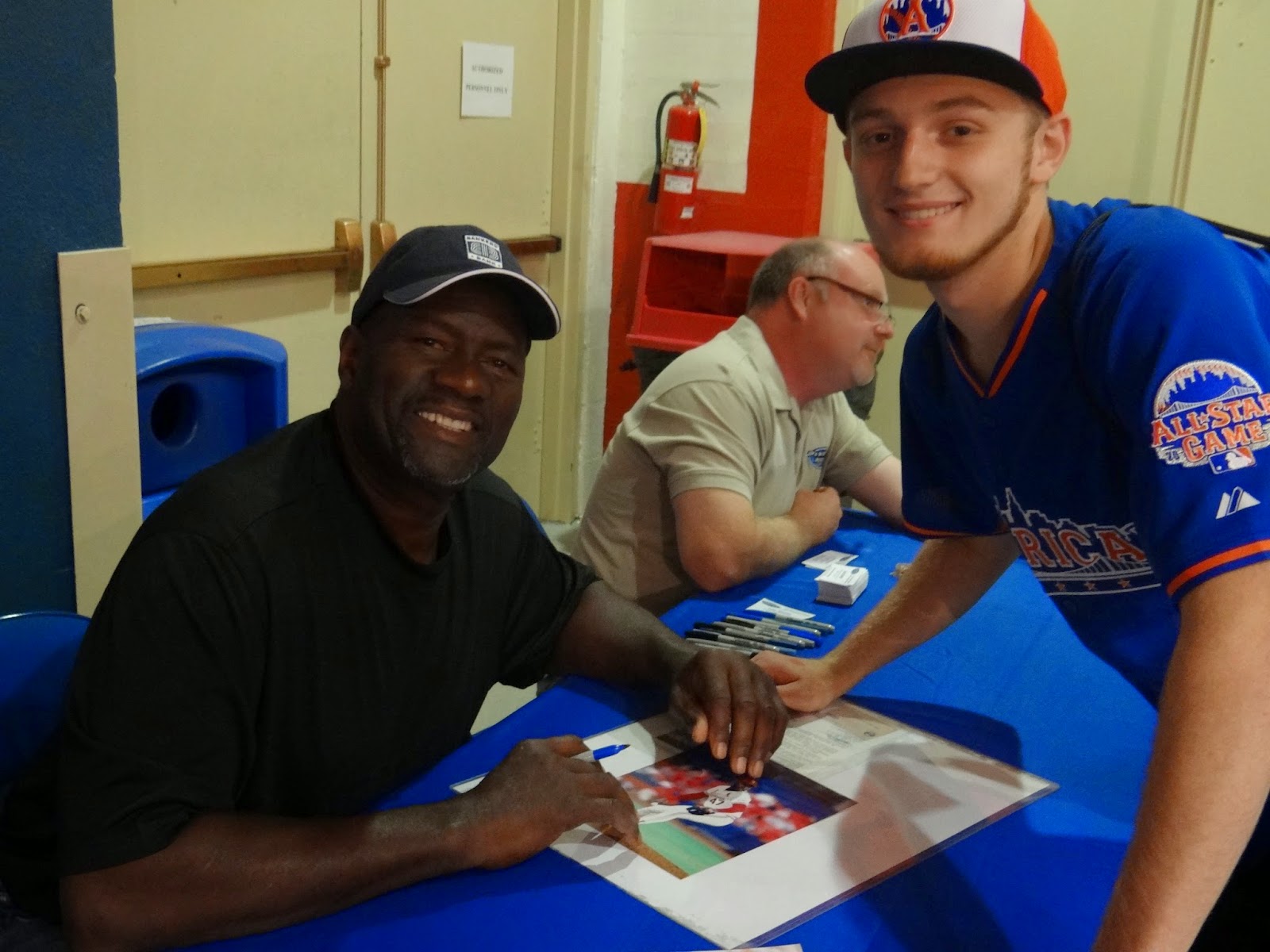 First up, should be Hall of Famer Lee Smith! I've met Smith on one prior occasion, but this go round he was JP's Sports' free signer of the day, and I couldn't pass up some signed pictures of one of the best closers in baseball history! Smith was really friendly for a free signer, and just like last time, we told him we'd love to see him get enshrined into Cooperstown, and he put his hands up to God saying he hopes so! It would really be something else if he got inducted and I was able to obtain so many cheap/free autographs of his, but chances are he won't make it at this rate. 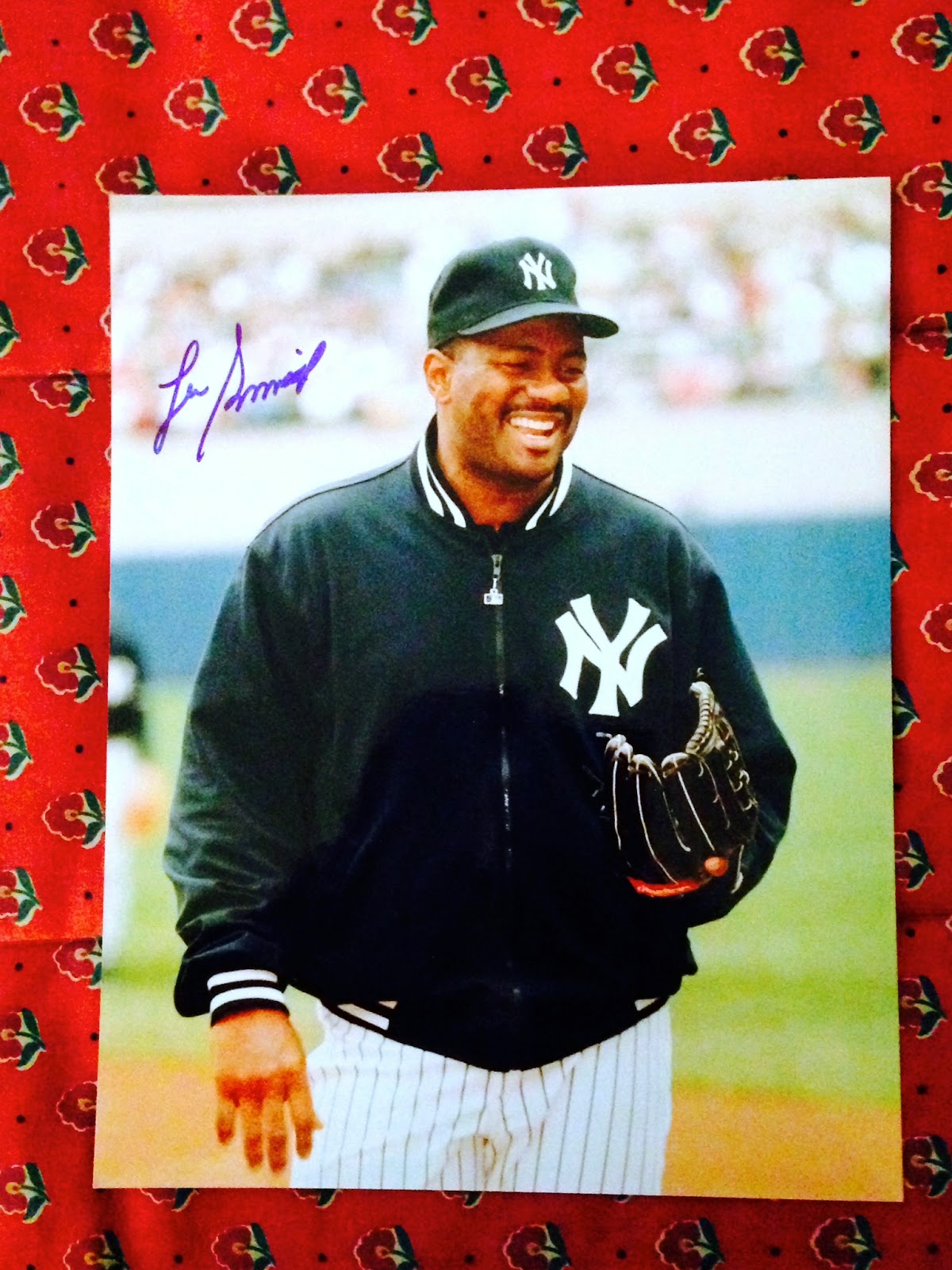 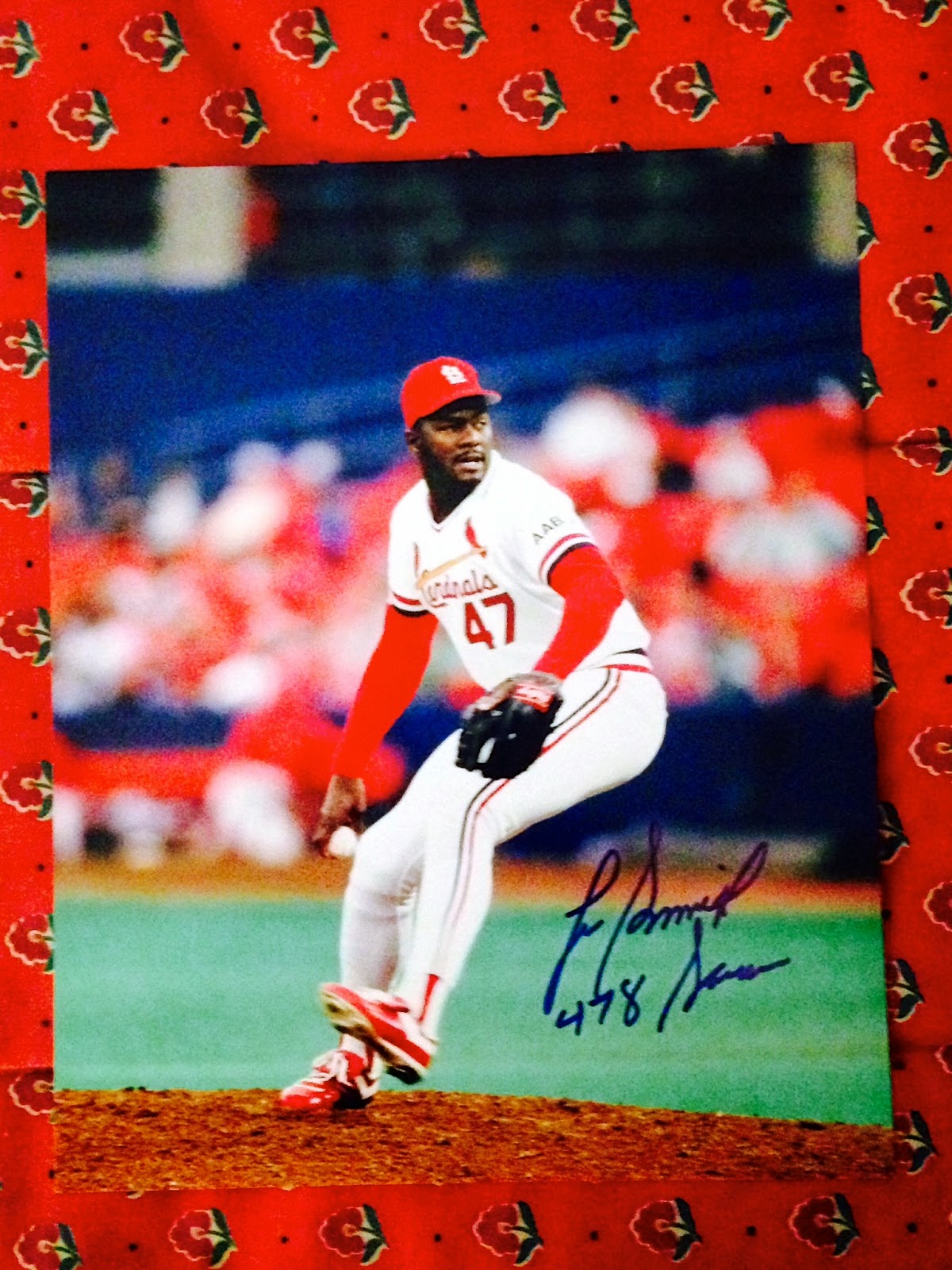 Smith signed two photos for my collection; one of which with his 478 saves inscription. I couldn't decide if I'd rather have a picture of him with one of his better teams (Cardinals/Cubs) or with his brief Yankees stint, so my Dad and I got them both signed! In retrospect I would've had him sign the Yankees picture in silver, but it still looks really good! All in all, another great experience with Lee Smith, who has definitely made me a fan of his over the years. 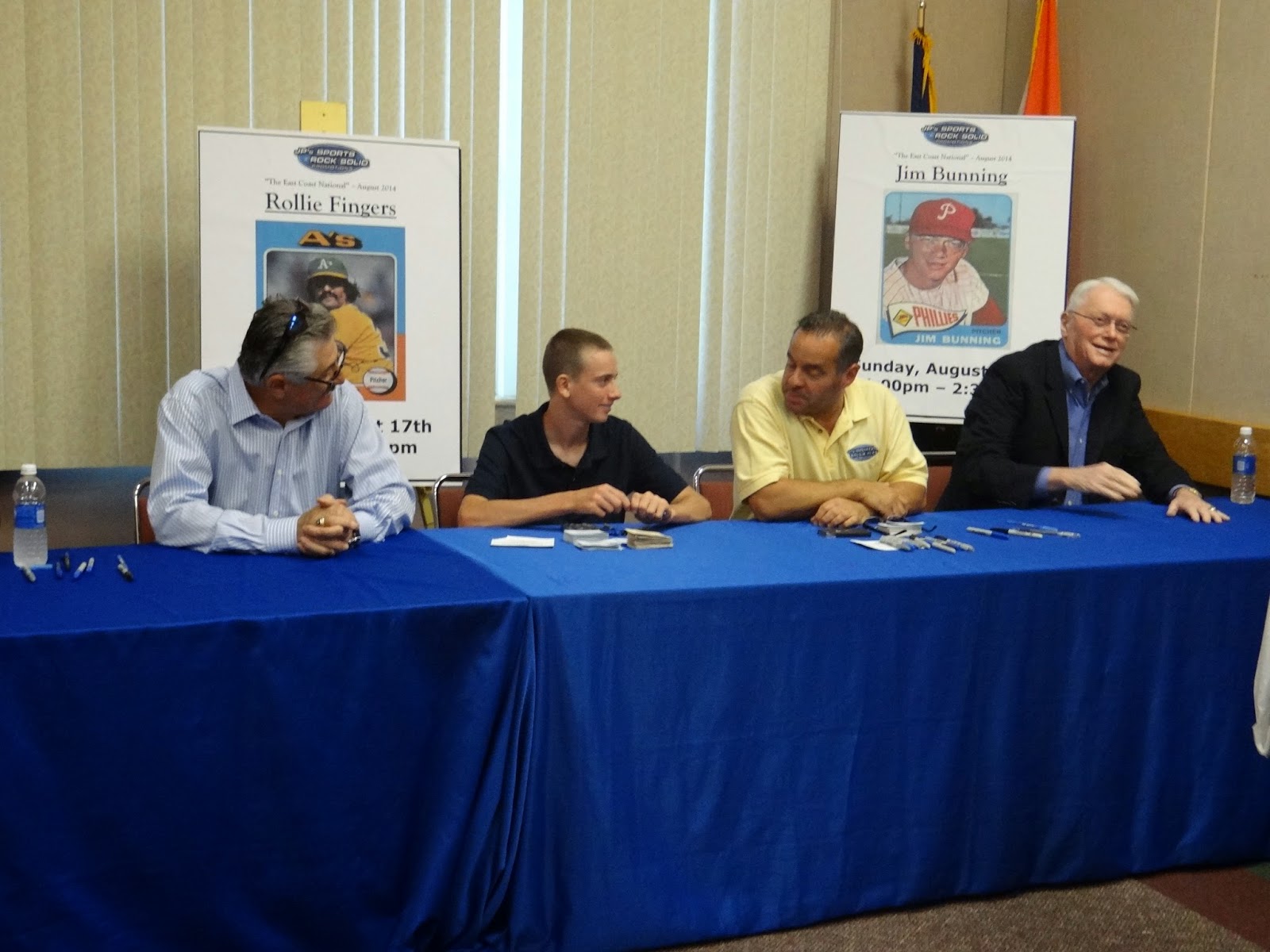 I met Johnny Damon after Lee Smith, which you can see in the previous post below, and following that Dad & I went into the side room, where 3 Hall of Fame pitchers resided: Ferguson Jenkins, Rollie Fingers, and Jim Bunning! I already had plenty of Fingers and Bunning autographs, so I passed them up, but did choose to add Jenkins to my signed baseball collection! 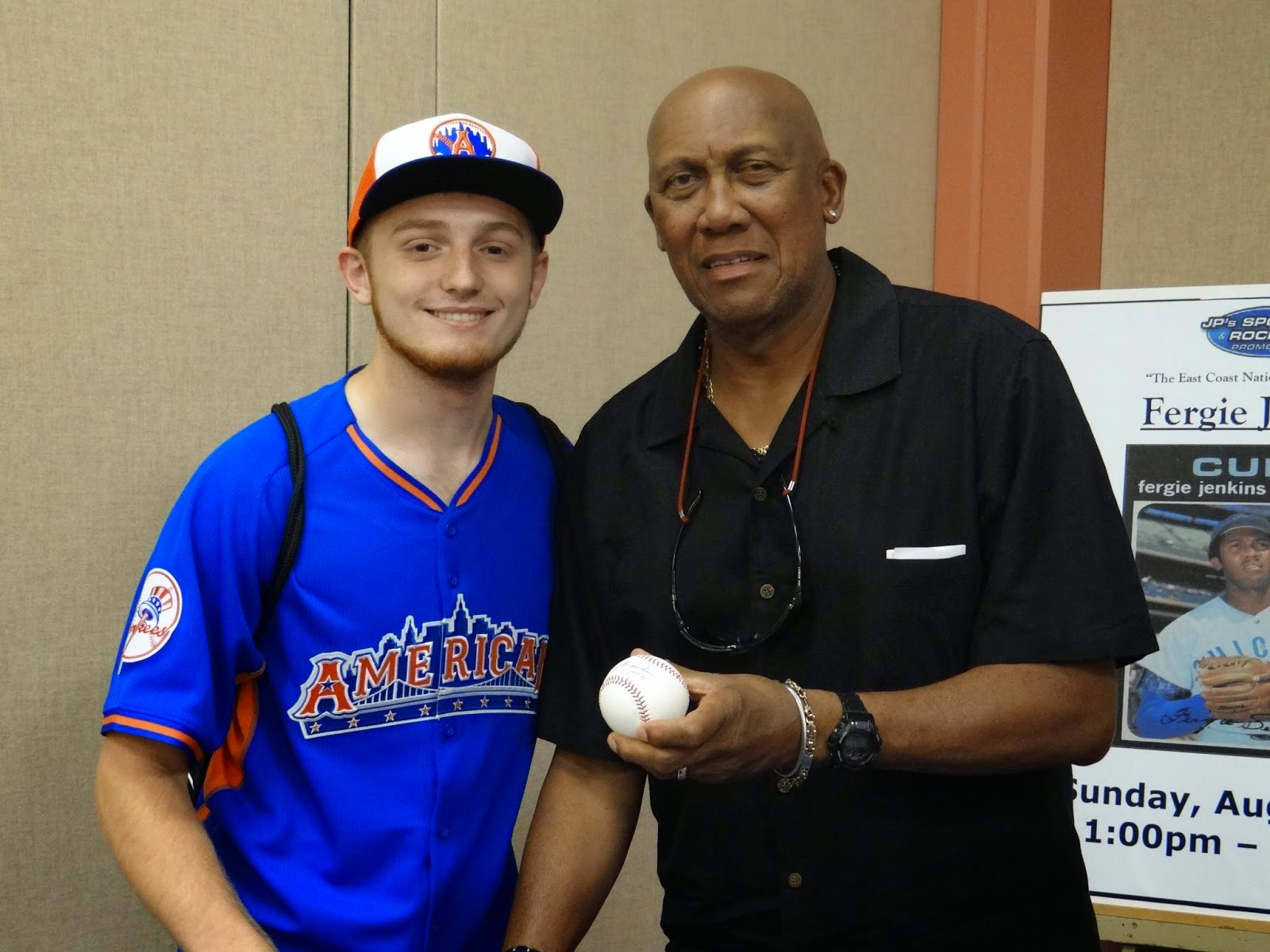 Jenkins was extremely quiet when I eventually got my turn to shake his hand, but admittedly, so was I. I don't know much about Jenkins other than that he was one of the more underrated pitchers of his era who had never had much of a chance at postseason glory. However, he stood up to take his nice picture with me and inscribed his Hall of Fame year for free, which was pretty awesome! 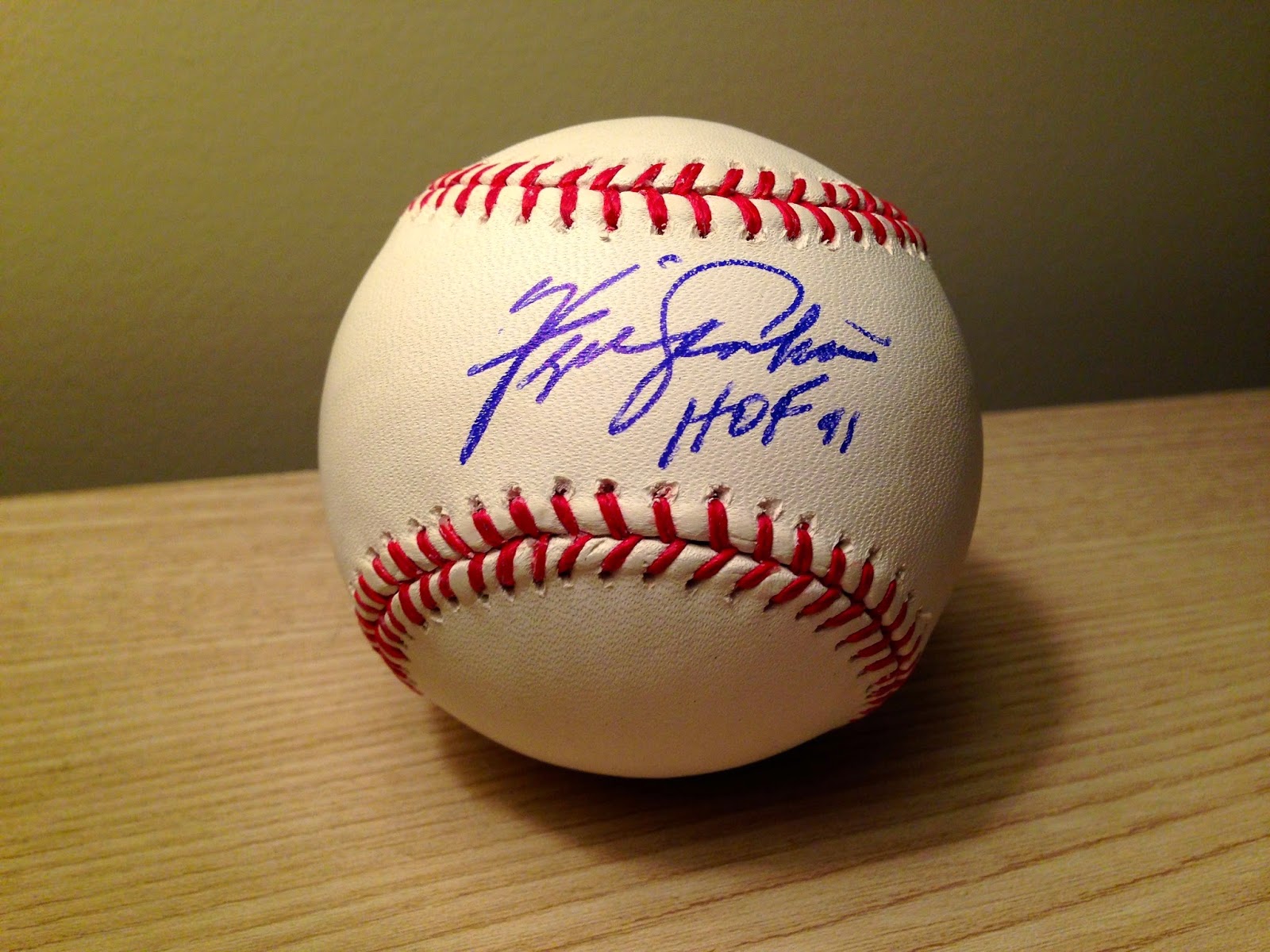 I didn't take much from my experience with Jenkins, but I did add this beautiful signed baseball to my growing Hall of Fame ball collection! I'm sure a good few of you already have one of these in your collection, but I finally joined the ship and I'm glad I did. 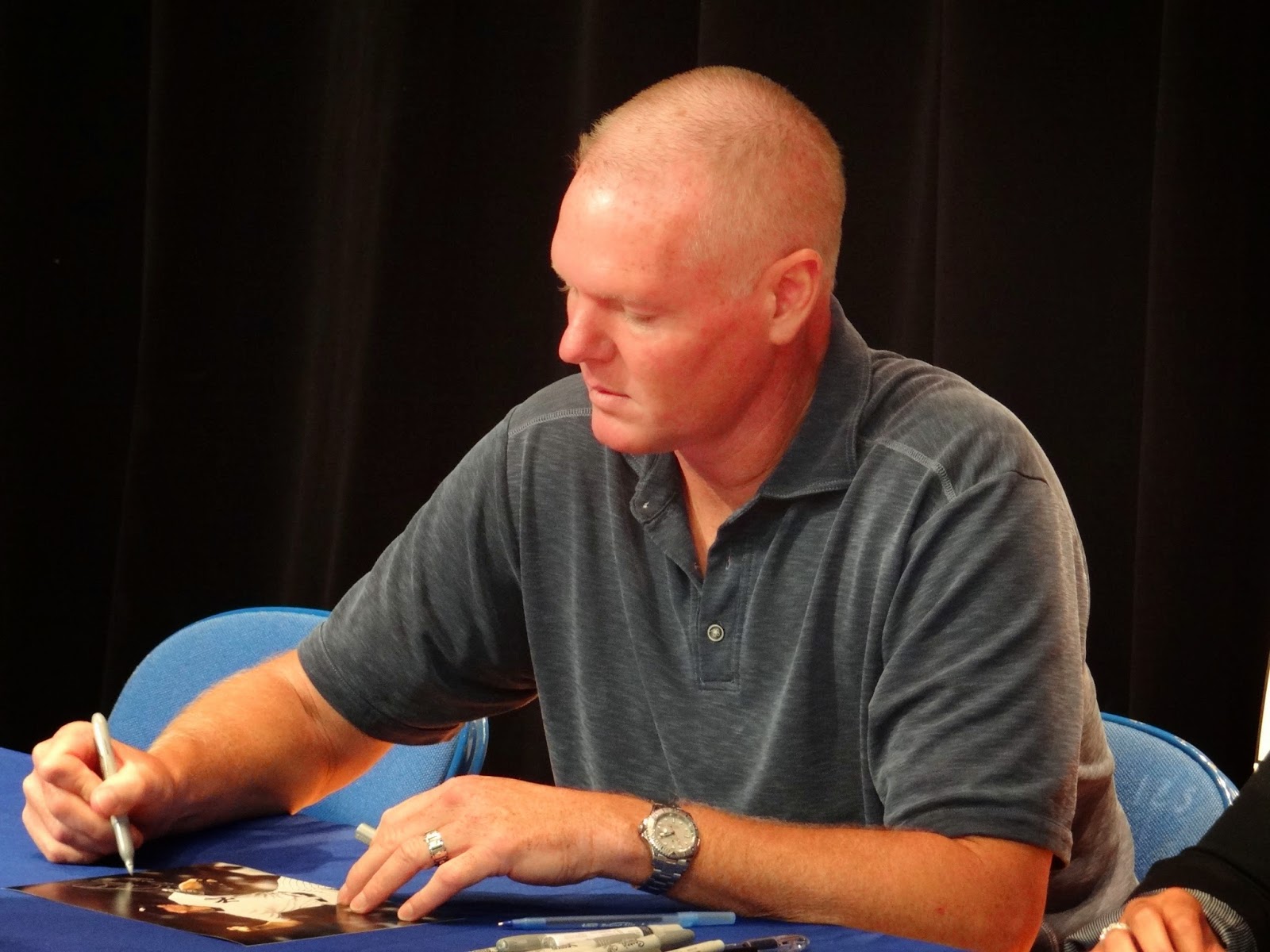 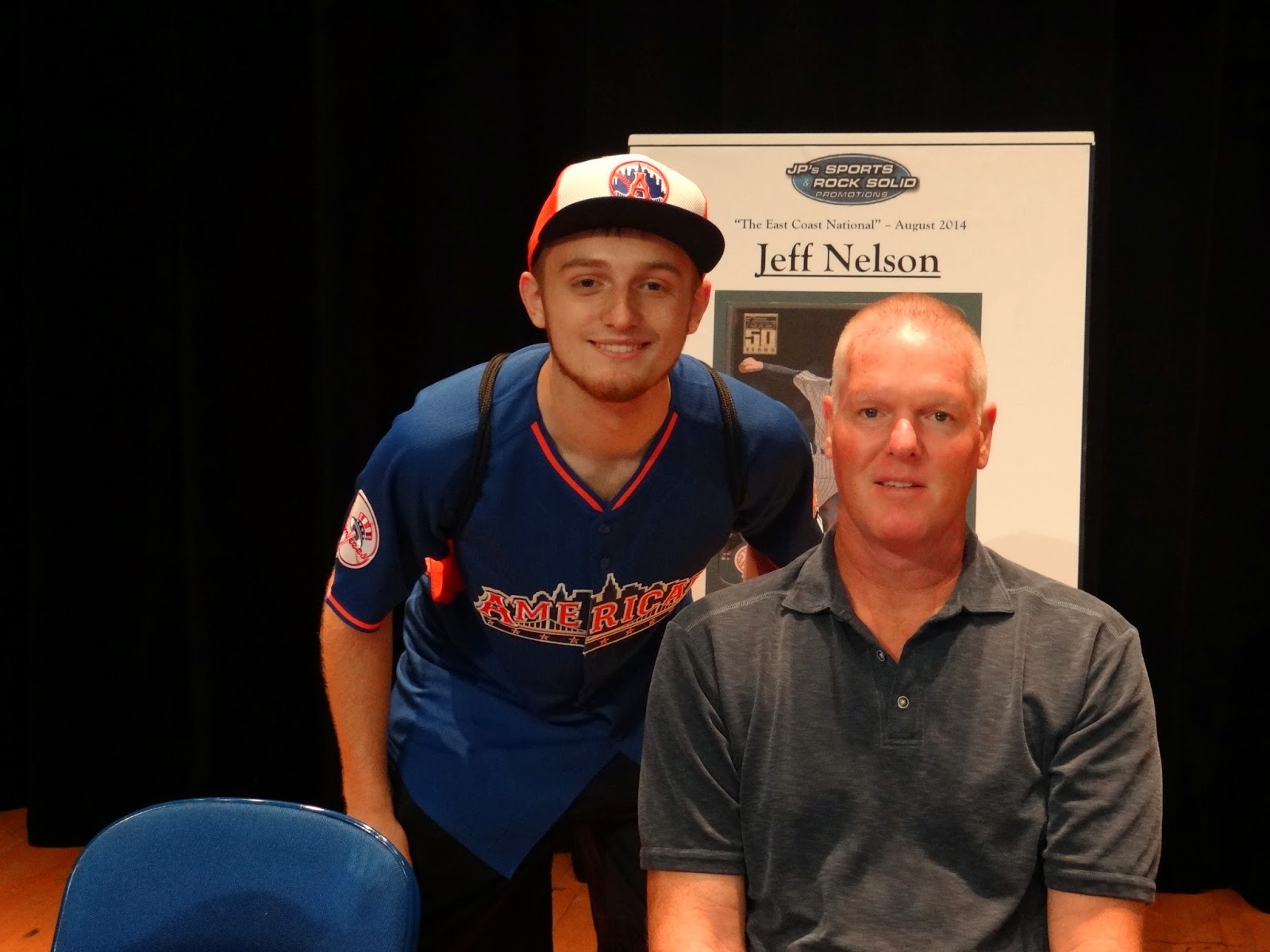 Lastly, I got to meet a key cog of the Yankees 1990's teams, Jeff Nelson! Nelson was perhaps the best reliever on the Yanks outside of Mariano and possibly Wetteland during their dynasty, so it was nice to get to shake his hand and thank him for the great memories. He was really quiet too, but allowed for a picture and signed my Mantle picture nicely (although he doesn't have the nicest autograph). 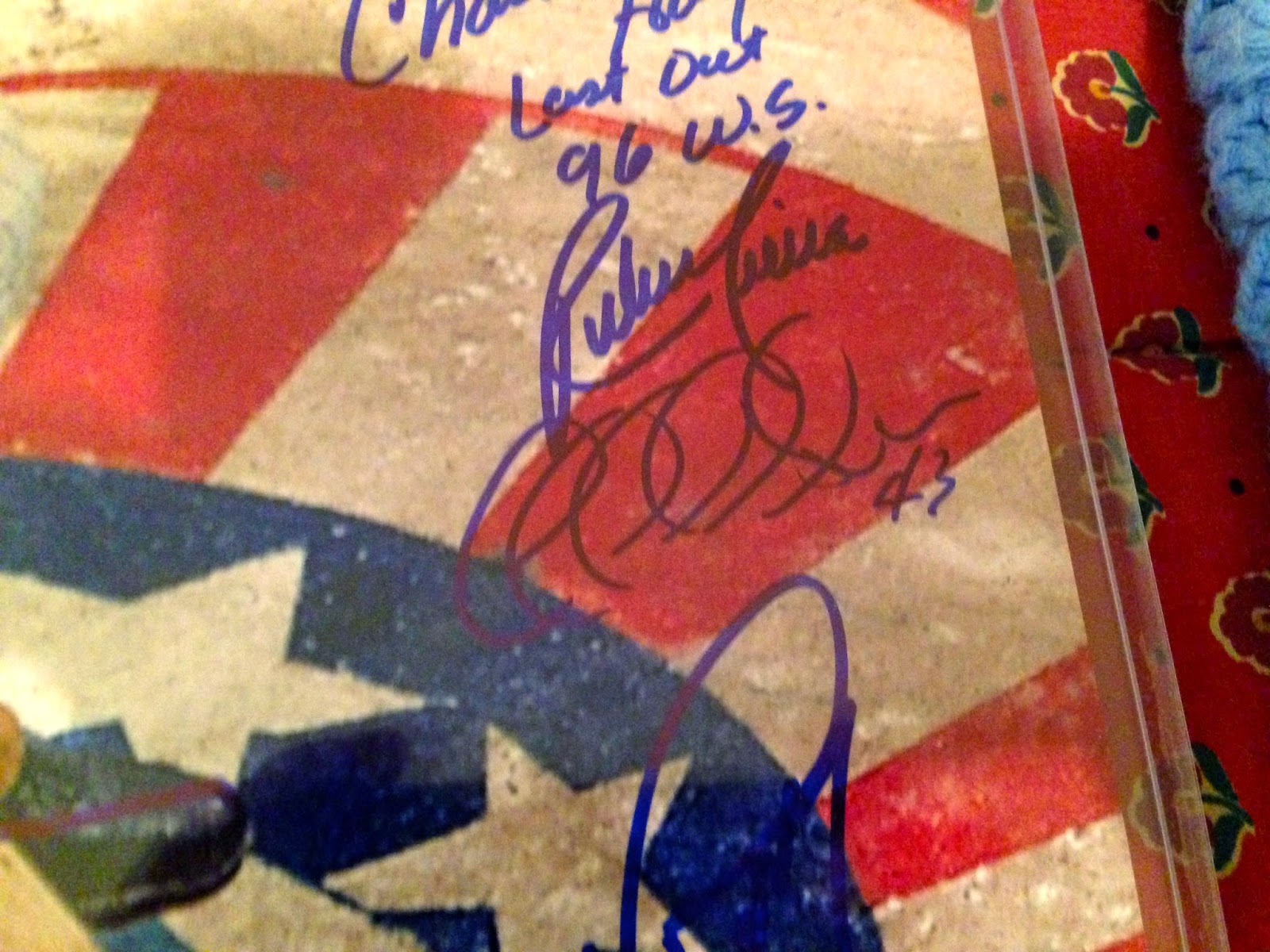 Nelson was my 52nd autograph on my Mantle picture, and was placed between Ruben Sierra and Gaylord Perry! Fortunately, he inscribed his number, or else he'd be very difficult to identify down the road. 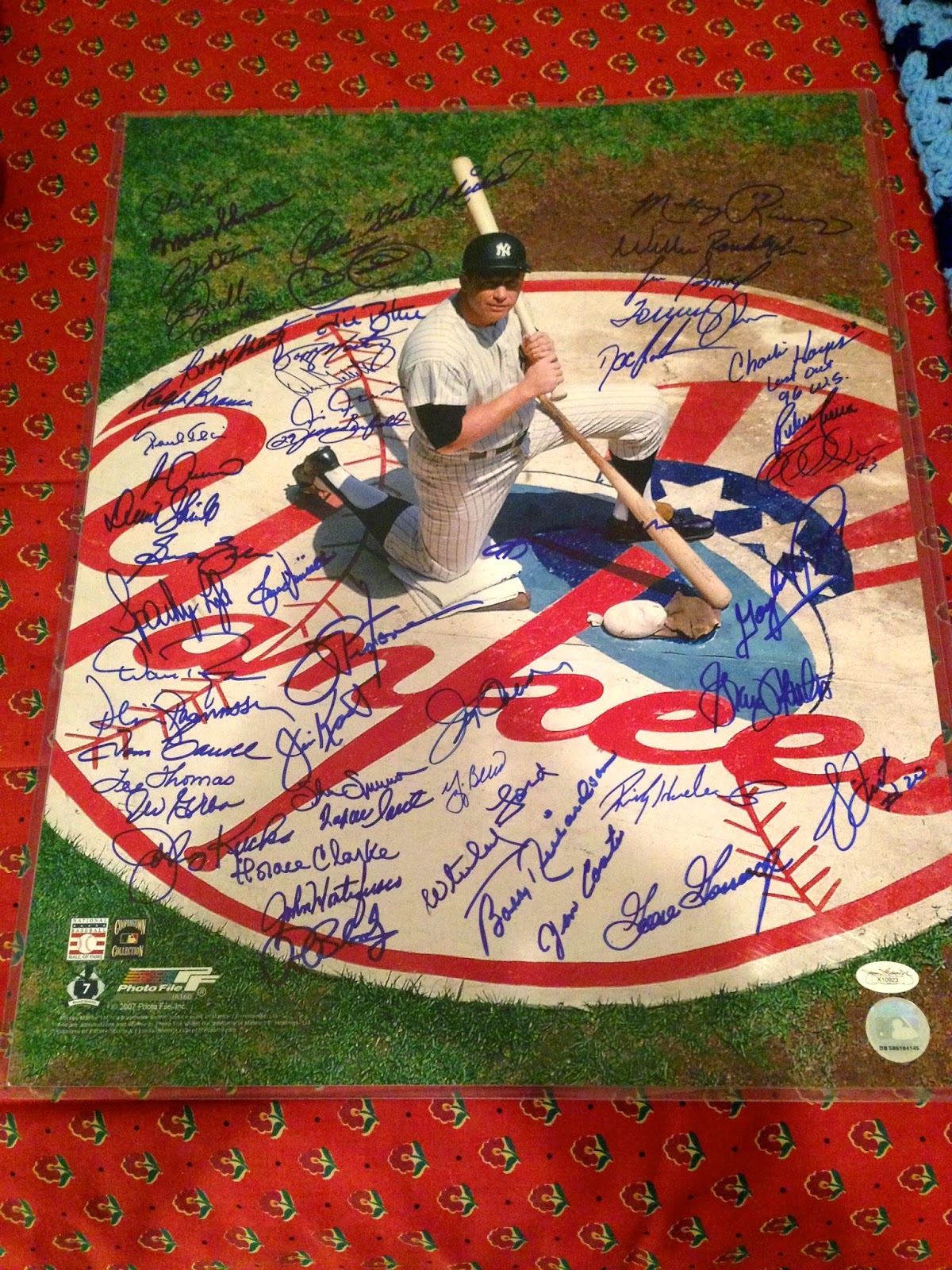 I believe I'm making some impressive progress on my picture, and already have a plan for how I'm going to finish it! I have a few big names to add before I cap it off though, and hopefully I get to do that sooner rather than later.

After I met Nelson, I started putting all of my items together and getting ready to leave. I saw Joe, the dealer my dad and I love to deal with sitting at an autograph booth next to someone I didn't recognize. I started talking to Joe about my Nelson and Damon experiences, and then he asked me if I wanted a picture with Eddie Munster! I watched the Munsters with my family once in a while when I was younger, and well, how could I pass up the chance? 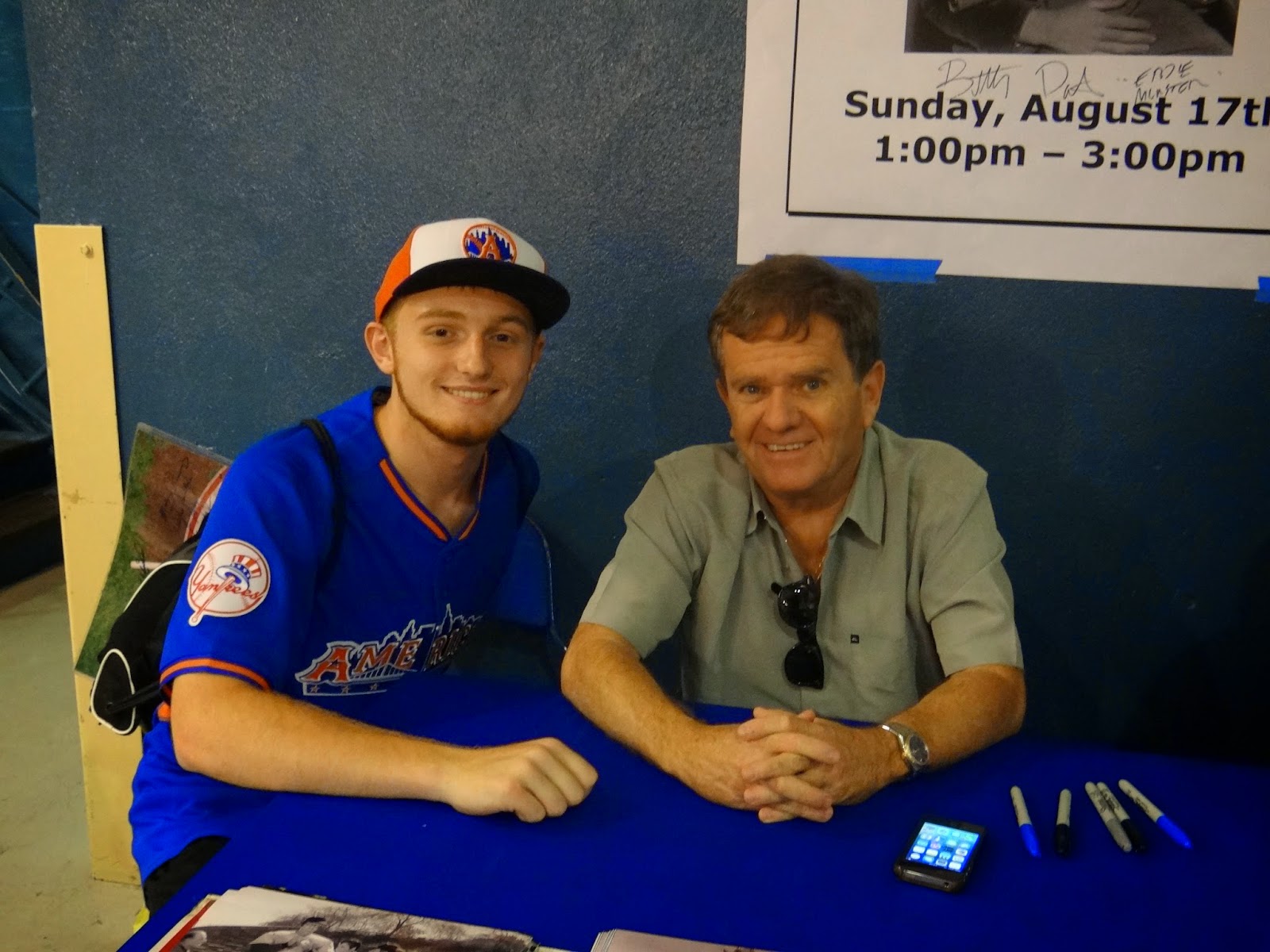 Joe actually sponsored having Butch Patrick on hand to sign at the show! My dad and I got pictures with him and talked to him and Joe about this being my last show before I left for college! They both wished me good luck, and Patrick remarked by saying "I had a 4.0 in college... Blood alcohol content"! He really was something else, and it was cool getting to shake hands with a classic TV character!

The August show was yet another productive one for my ever-growing collection! It was a blast hanging out with my Dad one last time before I went away to school, because I certainly miss him and everyone else for that matter an awful lot right now. Stay tuned for some more posts coming up, because I'm getting some TTM successes at home that my Dad sends me pictures of, and there's some good stuff coming! For now though, See Ya!
Posted by Drew at 5:54 PM