Hey guys, Drew back here! For the second day in a row, we have a snow day here in "upstate" New York, which has been nice for me as I'm trying desperately to get somewhat organized before the holidays. I think it's about time I get some of these cards off my desk and loaded into binders, so take a look at some of what I've gotten in from my buddies William, Scott, and Andrew over the past few months! 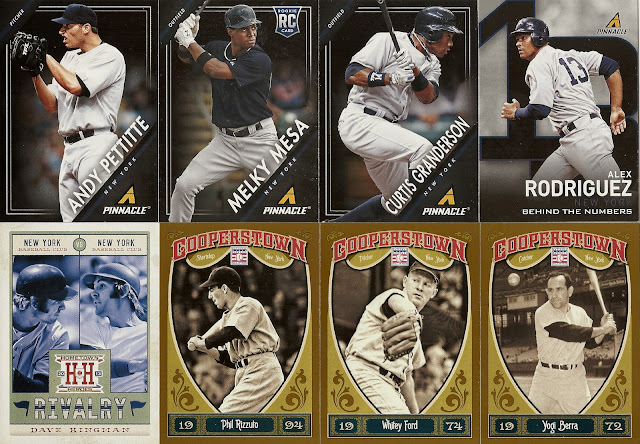 We'll kick things off with William, who; although I've had a hard time keeping in good touch with this year, still treats me better than anyone else in this hobby. I can't begin to express my gratitude for his friendship and I always appreciate the random care packages! He always catches me up on the products I don't buy (which is basically every product at this point) and sends me the Yankees, and once again he came in clutch and really helped me out. I really like the Panini Cooperstown product and I like how they chose some pictures that aren't used as commonly. It's a nicely designed product and maybe one day I'll buy a pack or two! 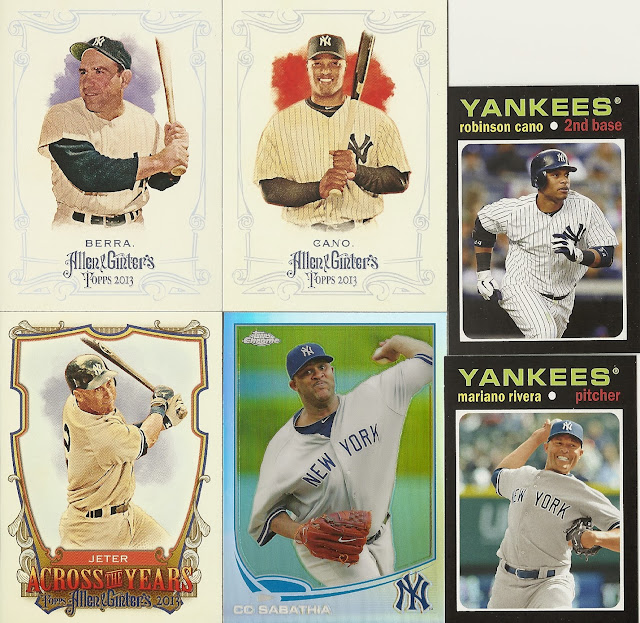 I always have checked out Allen & Ginter, so it really says something about my interest in investing in packs that I hadn't bought a single pack this year. The Berra & Cano's were really appreciated, as well as the Jeter insert! It's going to be weird remembering Cano isn't a Yankee anymore but I'm still going to recognize and honor the 9 great years he put towards the Yankee organization and highlight him in my collection. 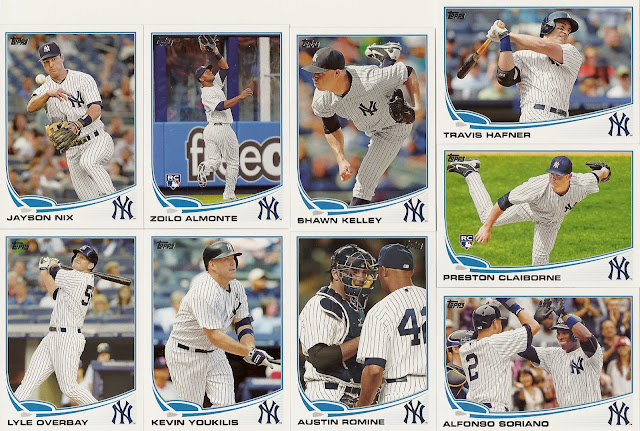 He also sent me all of the Topps Update Yankees he pulled, which was awesome of him too! I hardly opened any of the flagship product this year, and I actually really liked it. I've been spending my hobby money elsewhere, such as improving my Mickey Mantle 16x20 project and I've also had to allocate that money towards real world stuff such as gas and food. I've always enjoyed the update product though, because I'm the type of fan that really enjoys seeing how GM's can upgrade their teams and a majority of the cards in this set are the small names that Brian Cashman needed to make the most out of what was a pretty bad 2012 season. Lyle Overbay was solid all season, however Kevin Youkilis was injured most of the year. You win some, and you lose some, I guess. 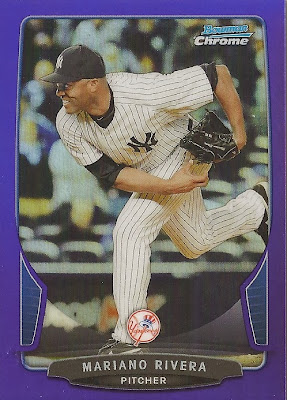 Andrew surprised me one day with a PWE containing this sweet Mariano Rivera 2013 Bowman purple refractor numbered out of 199! I really appreciated that he went out of his way to give me this card for nothing other than being a good friend. Everyone go give his blog some love if you haven't already! 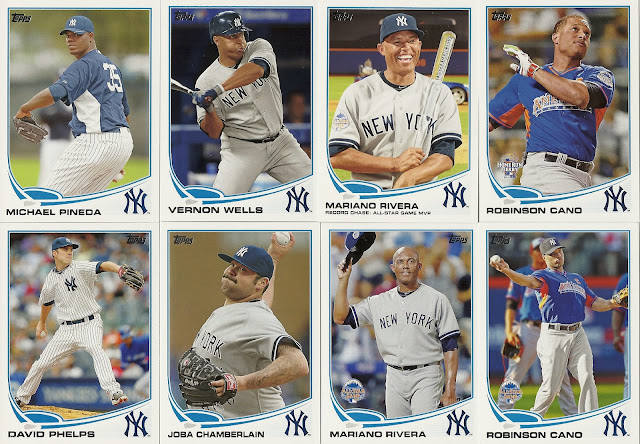 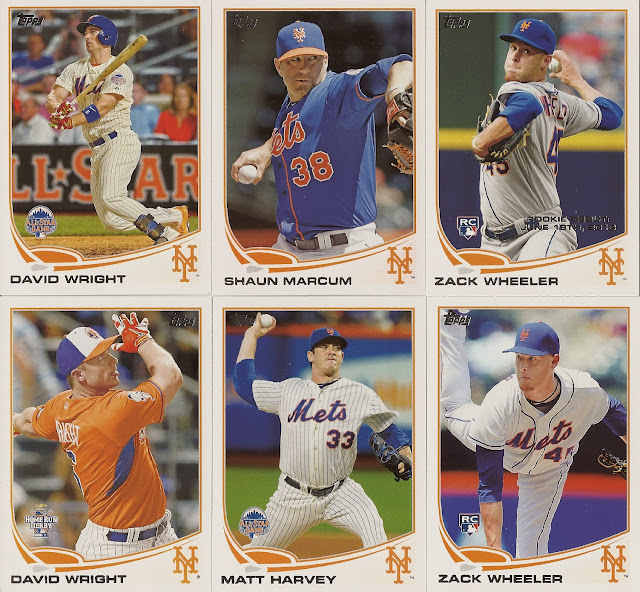 But that wasn't all that Andrew had to offer. I also recently participated in his group break of a box of Topps Update, and I ended up with the Yankees and Mets. I got all of the big base cards from each team including the Mariano Rivera inserts, the Home Run Derby cards, the Harvey card, and the Wheeler rookie card! 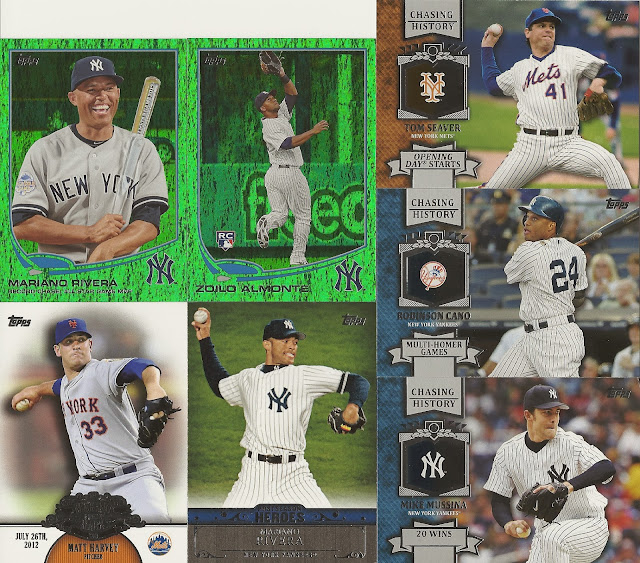 On top of that, I got a few nice inserts, my favorite easily being the Mariano green parallel. While this past year wasn't very good for the baseball team, honoring Mo's legacy did make the season somewhat more of a success than it would've been! I also really like the Mussina "Chasing History" insert. I really hope he does well on the Hall of Fame ballot this year, because I think if he can survive the heavy classes of the next few years, he'll eventually get in. 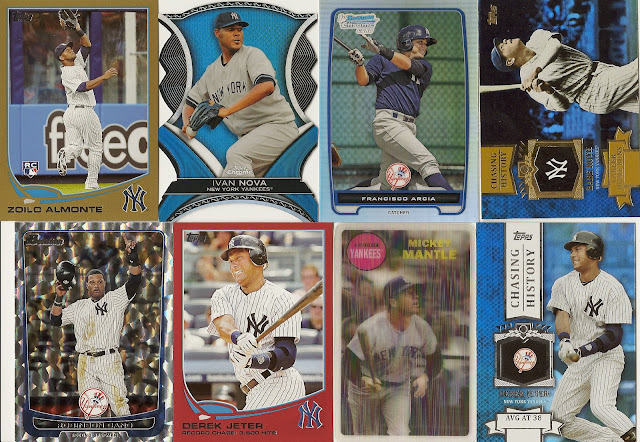 Last but certainly not least, I made my first trade in the past century with my good friend Scott over at Mr. Baseball. He and I have made some trades in the past, but nothing major was ever moved between us, until now. I finally gave up my David Ortiz Stadium Club auto in exchange for all of these goodies, because while it held a significant memory in my hobby experience, it fit much better in Scott's Ortiz PC. I got a bunch of nice inserts in the deal, including the Jeter red parallel and the Cano silver ice out of Bowman. 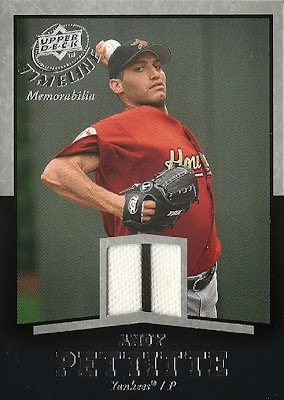 In addition to the inserts, I managed to pick up this Andy Pettitte relic with a pinstripe out of 2008 Upper Deck Timeline. Many people overlook the fact that Andy didn't play his entire career in New York, but he had some of his best seasons for Houston in the mid 2000's. He capped off his brilliant career last year, and he'll certainly be missed in the Yankees rotation next season. However, as Pettitte exits, enter a possible new era, as this guy could be vying for a spot next year: 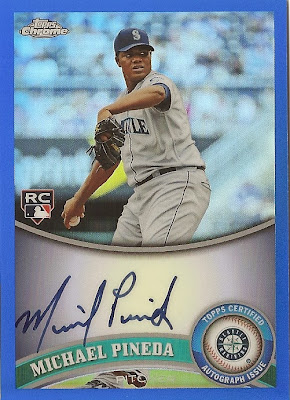 Numbered out of 199 from 2011 Topps Chrome, the newest big addition to my collection is this Michael Pineda blue refractor autograph! Pineda has a ton of potential, some of which he's already shown in the majors during his rookie season. He played very little last season, all in the minors where he was recovering from his shoulder surgery he underwent. He currently has an opportunity to take a spot in next year's rotation, but Yankee fans haven't gotten their hopes up. He's still only 24, so there's a lot of time left before considering the near 2011 Rookie of the Year a dud. If he ends up working out, I'll be very proud to have this card, but if he doesn't, that's part of the risk you have to take with cards like these.

So, I want to thank all three of you for everything, you all went out of your way to improve my collection and it means a lot to me!