Hey guys, Drew back here! About a week or so ago, I received two TTM's back in my mailbox. However, since the players don't really have a whole lot in common, I decided to break it up into two short parts. Leading off, a pitcher who had one of the best first halves in all of baseball! Check it out: 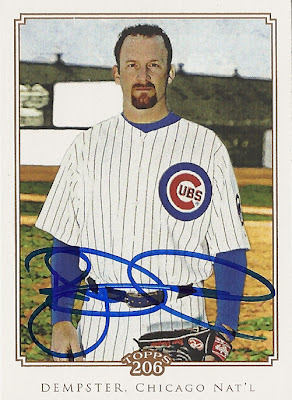 Cubs Rangers pitcher Ryan Dempster signed one 2011 Topps 206 card for me, in a relatively quick 23 days! Everyone says good things about Dempster as a person on and off the field, and I can see why, as he's always been a fantastic signer and a pretty good pitcher as well! While his Rangers stint hasn't really been smooth sailing, on the season, he's 10-6 with a nice 2.87 ERA. I didn't want the Yankees to go after him at the deadline, but that doesn't mean I didn't like him. He didn't appear to be a great for New York, especially considering how long he's pitched for the Cubs. I didn't expect all that much at all with him moving to the American League, but he's proven me wrong as some of his Rangers starts have been well above average.