The Most Famous 1961 Player Arrives in the Mailbox!

Hey guys, Drew back here. Thank god it's Friday! Been an extremely long week and like good old Rebecca Black says, I'm lookin forward to the weekend! (By the way, I am in no means a Rebecca Black fan) ANYWAYS, a week or so ago I was able to pick up this beauty on eBay. Give it a look: 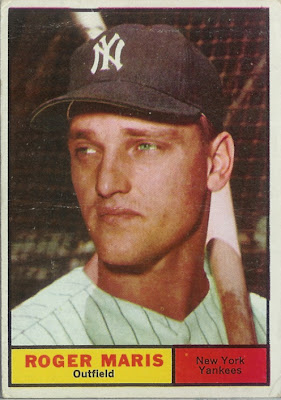 It's just the 2nd card of the 1961 Topps set, of the 1960 AL MVP, Roger Maris! If you were to pick any card of Maris', despite his rookie card of course, this would probably be your best bet. Maris didn't play all that long, only 12 seasons in the bigs, but he sure did make it worth it. As every baseball fan should know, one of the many main reasons I chose to build this set was because it was a great year for the Yankees and for baseball. It was the year of the Mantle/Maris home run race, of course, won by Maris, who hit a record 61 home runs that year. I still consider him the record holder, since the players who've surpassed him for single season home runs didn't do it fairly at all, and cheated the game.

As for the card, well its certainly not mint, as it has a few creases on it, one particularly over his mouth. The corners aren't mint, but it's definitely presentable and will go well with the set! I picked this one for a little over $30, which is a great deal, considering normally you would have to cough up between $75-100 for a decent looking one. As for commons now, the biggest needs I need are Sandy Koufax, Roberto Clemente, and Carl Yastrzemski's 2nd year card.

So, again, if anyone has some 1961's for trade, I'd be more than happy to work something out with you! Thanks again everyone, I really appreciate everything.