A Nice Weeks Worth of Mail!

Hey guys, Drew back here. I recently got 2 nice packages from the blogosphere, the first being from Mr. Scott of "Mr. Scott's Baseball Cards". He has been one of the most generous traders I've ever dealt with, parting with cards from his PC to improve my Yankees PC! He never wants anything in return, so I got a ton of great cards for free! Check out some of them: 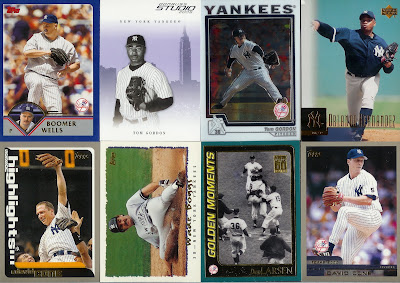 We begin with a few nicer late 90's-early 2000's Yankees. A great David Cone card based on his perfect game, a cool sliding Wade Boggs, and a Don Larsen World Series highlight. I'm pretty sure I had none of the cards in the scan above, so that's always good! 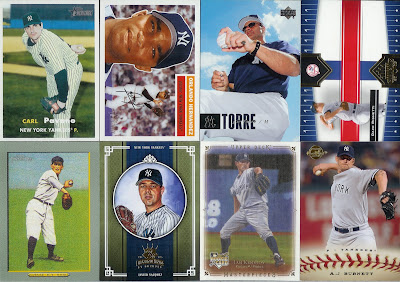 Outside of the Kennedy Masterpieces, I needed the rest of these cards as well. I love the 2009 Sweet Spot design with the seams that stick out of the card, and the card of Torre signing autographs was pretty sweet too. And you can't go wrong with some Diamond Kings! 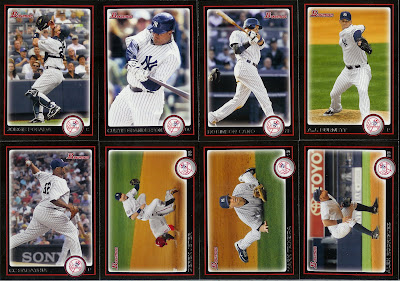 Also, I'm not sure if this is the entire 2010 Bowman Yankees team set (yes, Vazquez was in there too but didn't fit on the scan), but if not it's still awesome anyway. I'm not the biggest Bowman fan by any means, but this past year the base looked pretty good. 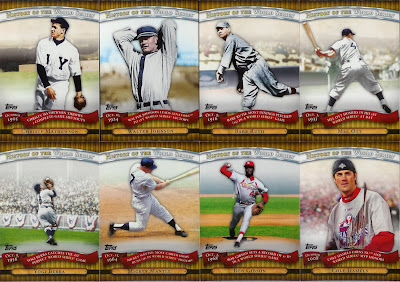 Scott also decided to help me out with some Topps inserts. Here are 8 of 9 History of the World Series inserts (the other is in the next scan), my favorite being the Yogi Berra for sure! I only need 4 more inserts from this set to complete the 25 card set (#'s 8, 16, 21, 25), and when it's pieced together its actually a pretty cool set! 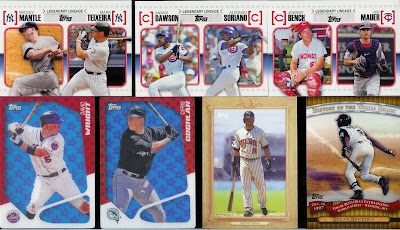 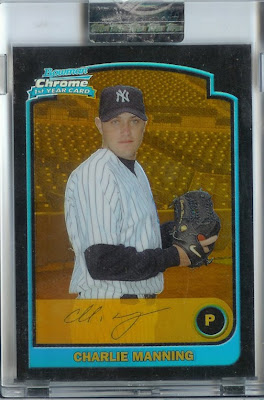 He included 2 more cards, along with 2 enormous stacks of base that were only briefly covered above. The first of these 2 was a 2003 Bowman Charlie Manning Rookie Refractor of some sort numbered to 170. Manning was given up by the Yankees shortly after this card was produced to land Aaron Boone in a trade with the Cardinals, and we all know how that one worked out. Soon after the Yankees got him right back, but since he has been on multiple teams and hasn't done close to anything with his career. Oh well, cool looking card though! 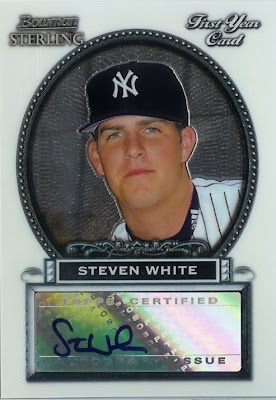 The final card to show off from this package was this 2005 Bowman Sterling Steven White autograph! White was nothing special at all, bouncing up and down through the Yankees minor league system up until 2008. He totaled 32 wins and 30 losses in the minors with a career ERA of 4.06. He never made the majors and appears to be a free agent as of now. This card looks really awesome nonetheless!

Thanks SO much Mr. Scott, you really did not have to do all that! The second and final package this week was from Samuel of "The Daily Dimwit". Him and I made a trade recently, and this was his part of it: Four 2008 Upper Deck Masterpieces cards that I needed! And 4 sweet ones at that. The Posada card is a surprising need, but now I'm only down to 3 base cards that I need (#8, 29, and 86) as well as 19 out of 30 short prints that follow the standard base set. 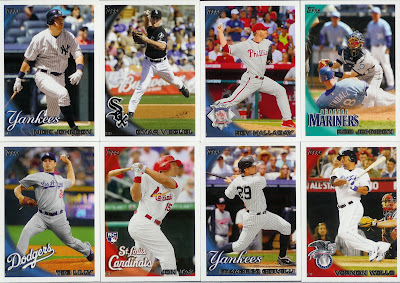 Next were 17 2010 Topps Update cards I needed for my set, and with 2011 Topps already out, I am beginning to be in a rush to get this done and overwith. I did have the Cervelli and Nick Johnson cards prior to the trade but they were caught up with the other Yankees cards and I forgot about them. Still, it's good to have 2 of them, one for the Yankee binder and one for the set binder! 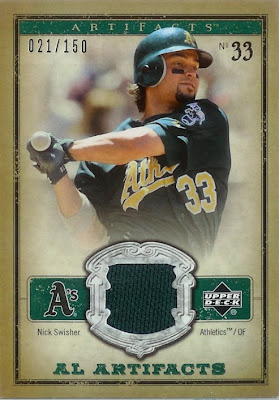 And last but never least, a 2006 Upper Deck Artifacts Nick Swisher relic numbered to 150! I haven't picked up much of anything Swisher and Cano related right now, but I've found myself to be saving money for the card show, plus I've also been really picky lately. This however, is an awesome card to add to the collection, becoming my 125th unique card of his. I love different colored relics outside of the typical gray or white, and that's a cool thing about Swisher playing for the A's. Cool relics.

Thanks so much Samuel! Your part of the trade will go out very soon!