A New Chapter for Fiorentina Baseball

Baseball may be "America's Pastime", but its origin may have even come before the United States declared their Independence from Great Britain. In fact, some even say that American baseball has just been an advancement of several European games deriving from as early as the 18th century. While football is clearly the dominant sport of Europe today, baseball does still play a role throughout.

Unbeknownst to many, in 1948 the Italian Baseball League (IBL) was formed. The league consists of teams throughout "the boot" and bases its headquarters in Rome. Some Italian towns place higher importance on the game than others; particularly nearby the nation's capital in Nettuno and in the northern Emilia Romagna region (specifically in Bologna).

Nettuno and Bologna dominated the IBL in its early goings until playoffs were introduced in 1986. Both teams have remained successful since the switch, but the addition of playoffs have allowed for others to share the spotlight.

One of Italy's up and coming teams is SSD Fiorentina, whom I have had the pleasure of learning about through relief pitcher and outfielder Daniele Sassoli.

Sassoli, 22, started playing for the Fiorentina organization when he was 10 years old. His father, Federico Sassoli; has helped coach each of Daniele's teams, including this year's team. Federico played for Fiorentina when they last won the pennant, and stopped following baseball until Daniele began playing as a child. Their current head coach, Marco Duimovich; was on track to become one of Florence's all time great players growing up, but shoulder and ankle injuries halted his path. His involvement in baseball has given him a unique mentality that he hopes to pass on to his players.

Fiorentina is currently set in the IBL's Serie B, which makes it part of the highest minor league level. As with many other European sport structures, teams can rise and fall from level to level based on performance, which takes away the safety net that major American sport leagues have for its weaker teams. However, they are quickly becoming of the best teams in their region thanks in part to the contributions and sacrifices made by former Team President Pier Paolo Vita. Unfortunately, Vita died from a sudden heart attack while on a skiing trip with his family on March 9th. He was 65 years old.

Vita, nicknamed "Cesare"; took over as President in 1993; just twelve years after the club was initially founded. It was first treated as a side project to his more successful gym business across the renowned Renaissance city. He had a passion for the game though, and would often funnel his own money into the team to help provide for uniforms, equipment, and transportation. Most players in Italy have to pay to play to cover for these expenses, but once "Cesare" took over Fiorentina became one of the few exceptions.

Over the past decade, he was beginning to lose interest in the club. His son no longer played for the team, and quite frankly they hadn't been very successful despite his influence. But leading up to his untimely death, he was rejuvenated and could be found in the crowd for every game once again. He was a "man of heart," according to Sassoli. He paid to have the team gym renovated and also built a bar next door to Cerreti Baseball Stadium, their home field. The team may have lost its heart and soul with Vita's passing, but his parting gifts have set them up to potentially become the best they've ever been.

Going into the 2016 season, Vita's former business partner Antonio Gallo will be filling the void. It is undetermined whether he will invest the time, money, and effort that his predecessor did with helping the team. He is not as infatuated with baseball as "Cesare" was, so the players are anxious to see what will happen to the team in the future. One fact is known: in order to continue his legacy, everyone will need to work harder. The bar has not profited well thus far due to its obscure location and poor organization. Several of the players were hired by Vita to work at the bar if they were struggling to find work elsewhere and needed the money to support themselves.

Sassoli was eager to begin the new season despite of the sad news. This will more than likely be his last season playing for Fiorentina, as he is prepared to move to London to begin working as a software engineer this summer. He, as well as the rest of the team; plays because he is passionate about the game and has fun with his teammates. "We play to prove something to ourselves," he explained. "If we win, we might get a pat on the back if we're lucky. Nobody really knows about baseball in Italy."


"We play to prove something to ourselves.
Nobody really knows about baseball in Italy."
- Daniele Sassoli

With a roster composed primarily of young adults, education and work happen to come before winning or losing games in most cases. They aren't paid to play, so the only punishment players receive is from their teammates for letting them down at a time of need.

So far, Fiorentina has been the team to beat in Serie B. They have won all six of their games to open the season against Cali Roma XIII, the Lancers Baseball Club (based outside of Florence), and Nettuno. Pitcher Alessio Sinforici has only allowed one run in total between three starts, striking out 23 in the process. In addition, pitcher Mauro Salciccia has given them three quality starts. Their offense has provided at least 6 runs in each of the games, proving that all of their offseason workouts and training has paid off. They will try to continue their winning streak on Saturday, May 7th in a doubleheader against Livorno.

Their roster is constructed of mostly young adults in their late teens and early 20's, but the range even extends to two players that are over 40 who still choose to suit up in Fiorentina red. They are still integral to the team's success because they are able to "give something to the younger players on the team"; according to Sassoli. 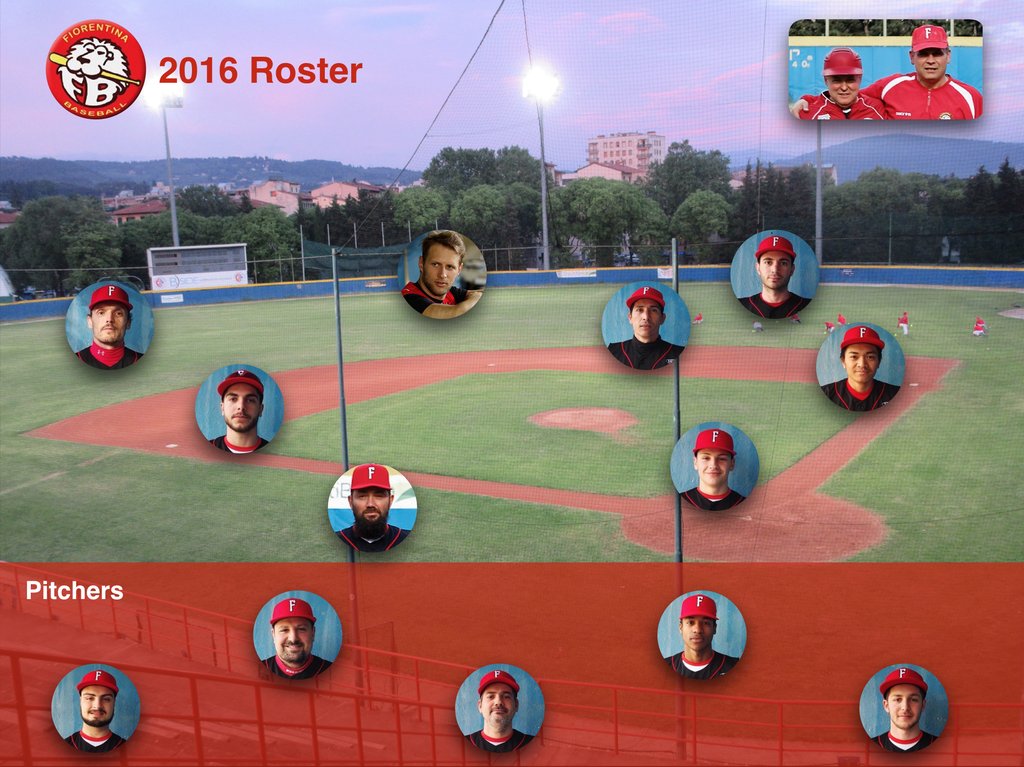 If they can continue their early season dominance, they will reach the playoffs for the first time in several years. In order to make the postseason, a team needs to finish in first place in their respective region. They have finished in second for a few years in a row now, but Sassoli is confident that they can win the region and advance into the playoffs this year. And if this is the case, he will make sure he can be there.

"Of course I'll be there. Even if I leave for London before the playoffs start, I will fly back home to help my teammates. That's what Fiorentina baseball is all about."


For more information about SSD Fiorentina baseball, click here to visit their team website.
Posted by Drew at 10:48 AM