Hey guys, Drew back here! Happy Opening Day! I missed school today coincidentally, because I wasn't feeling well this morning, but it turned out to be a nice day to take off. I rarely get to see the Yankees Opening Day game, so I was really excited to be able to today. Well, a few innings into the game and I was wishing I was in school. The Yankees had quite the lineup today, I must say. It's going to be a tough first month but I'm sure they'll be able to pull through. Anyway, here are a few cards I recently picked up from the new 2012 Panini National Treasures product in honor of the inaugural day of the 2013 season: 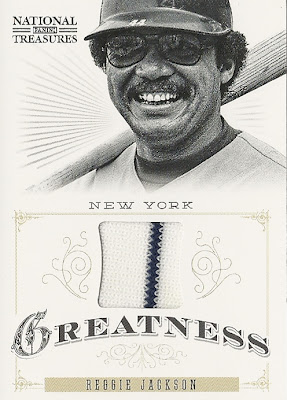 First off, I picked up this beautiful Reggie Jackson "Greatness" relic with a pinstripe right down the middle for about $10! I can never have enough Reggie cards, and this one I just couldn't pass up. National Treasures is such a nice product; its unfortunate that it's as expensive as it is. 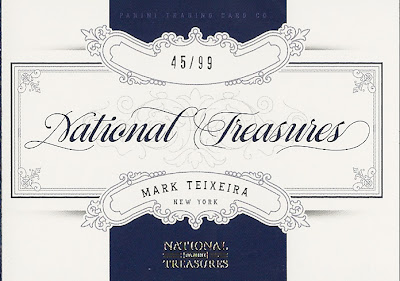 I also added my first ever booklet card, this being of Mark Teixeira! It isn't anything spectacular, just a plain old road jersey, but it's a really cool looking card. I've had too much fun the past few days opening and closing the book, but I'm sure I'll get bored of it eventually. I may pick up a few more of these from this set, but they really are a pain to store, and I don't think a Mark Teixeira relic is worthy of buying a booklet screwdown holder for.

That's all for now from Panini National Treasures, but certainly not for good. I won't be buying any boxes in the near or distant future but I'm more than open to a single at a good price. Maybe I'll get some of the Cano and McCutchen cards. We'll have to wait and see.