Hey guys, Drew back here! As you can see from the title, I recently decided that I'm going to PC Andrew McCutchen of the Pittsburgh Pirates. The Pirates have been my second favorite team for a few years now, and Andrew is certainly a good reason why. He's already an MVP contender at the age of 26, and is a great role model on and off the field. It was a no brainer to add him to my list of favorite players!

In order to conserve a little money, in exchange for McCutchen, I've decided to un-PC Nick Swisher. I still love the guy, but chances are he won't be a Yankee anymore, so I thought it'd be wise to close that collection while he's still in New York. I'll still take his cards off your hands, but I won't be buying up on him as big as I used to.

I already owned one McCutchen autograph prior to the beginning of this collection- out of 2010 Bowman Platinum, but I recently picked up a few more things to jumpstart the chase. Check out the first official McCutch Mailday! 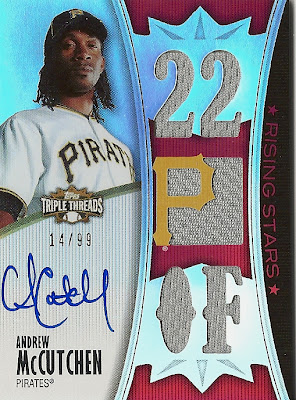 We begin with a bang! Out of 2010 Topps Triple Threads, the Rising Stars triple relic autograph numbered to 99 is now mine! This one wasn't exactly dirt cheap, but I really wanted to get something sweet to base this whole collection around. It's a real clean, slick card, and it shines quite a bit as well. 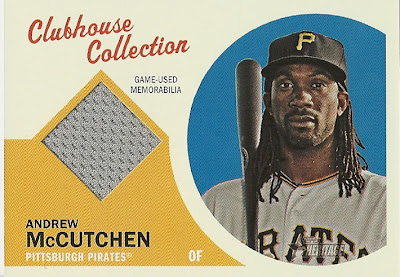 Next, out of 2012 Topps Heritage, a Clubhouse Collection relic! I'm not too big on relics, although I still am one card shy of completing the Topps Tier One relic set. When you start a collection of a player, however, relics are almost a necessity, and this will also push me towards the almighty trifecta. 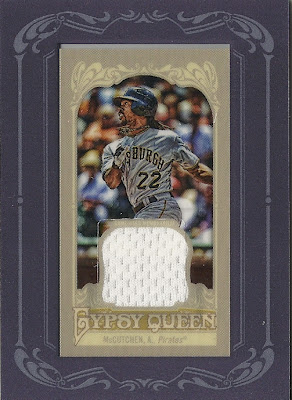 Lastly, for now, is this beautiful framed relic out of 2012 Topps Gypsy Queen! McCutch has two relics in the Gypsy Queen set, one framed, and one not framed, and I believe this is the nicer of the two. I'm not too crazy about the color of the border, but it certainly wasn't bad enough for me to pass it up at only 2 bucks shipped.

So, that'll do it for now! If anyone has some McCutchen cards for trade, leave a comment below! Thanks, and See Ya!
Posted by Drew at 8:10 PM