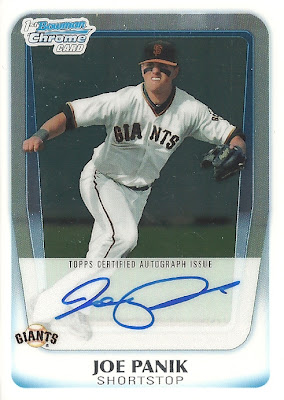 Out of 2011 Bowman Chrome, this right here is a rookie autograph of San Francisco Giants top prospect Joe Panik! Normally I don't tend to venture in the area of prospects, but Panik is a native of my county, and went to a high school very close to where I live! I first heard about him in a local newspaper article, talking about how he was a captain in high school who led the school to the league championship, and how he went on to be drafted in the first round (29th overall) to the Giants in last years draft. From then on, I became a fan of the hometown kid, because while many players come from the city area, not many come from the more upstate part of New York. I bought this card for about $10 and don't regret it one bit. Even though I don't open Bowman all that often, their autographs are really, really nice.
I wish Joe Panik the best of luck on his rise to the big leagues! Let's see a little representation for the 845!
Also, on a side note, everyone better go on over to my friend Andrew's blog and show a little love by entering his contest! All you gotta do is follow his blog and comment on the post to get yourself a few entries to win a heck of a lot of 2012 cards! Let's get the young guy some followers, guys!
http://andrewsbaseballcards.blogspot.com/2012/06/contest-time-part-1.html
See Ya!
Posted by Drew at 6:07 PM