Hey guys, Drew back here! Yeah, I've still got a lot of stuff to show you all, so I might as well get going on that! A few weeks ago, I received one of my favorite TTM returns I've ever gotten, one that came out of absolutely nowhere. I've sent one TTM request since June, which is pathetic but unfortunately true, so when one of the older requests come back I'm always in complete shock! He didn't sign my custom I sent him, but he did sign the other card I included, and it looks pretty darn nice. Check it out: 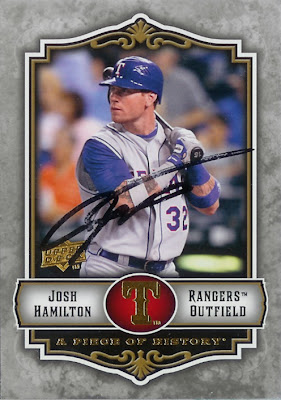 The return was from Rangers All Star outfielder Josh Hamilton! Ever since that one summer night in 2008 in Yankee Stadium, Hamilton has been my favorite non-Yankee player. His performance in the Home Run Derby that year may be one of the most unreal moments I've ever watched, clearly something I'll never forget. From that point on, I researched him and learned about his story, and immediately gained a lot of respect for him because he came back so strong after going down a dark path. He suffered emotional issues for many years due to his drug addiction, but he was able to recover from the addiction  in order to play baseball again. The Rangers traded Edinson Volquez for Hamilton following the 2007 season, and boy has he worked out for them. While he's suffered some injury issues, he did win the 2010 AL MVP award after posting up big numbers: .359 AVG / 32 HR / 100 RBI! I really enjoy watching him play and I'm so happy he signed my card for me!
I sent the card out on January 7th of last year, and got it back in late December of 2011. I didn't think I'd ever see the day it would come back, but I guess he decided to catch up on his mail, and I was one of the lucky fans to receive an autograph! Thanks so much Josh!
See Ya!
Posted by Drew at 8:00 AM